The Hungarian opposition kicks off the new year by resuming the series of protests prompted by the Overtime Act and the introduction of a new administrative court system overseen by the Minister of Justice. Opposition MPs called an extraordinary session of Parliament to determine whether or not the votes on the Overtime Act and the new courts were valid at all, and to assess the unlawful violence against MPs during the protest held in front of the public media HQ.

The extraordinary session was cut short since none of Fidesz's MPs showed up, a move that rendered the parliament unable to pass resolutions. The opposition wanted Parliament to investigate the validity of the session passing the much-criticised new laws, and to pass a resolution determining the unlawful nature of the atrocities against opposition MPs committed at the offices of Hungarian public media. Chief of Staff Gergely Gulyás previously said Fidesz will not be present at the session as they do not wish to provide "legislative weight to the clown-show of the opposition."

After leaving the chamber of Parliament, members of the opposition gathered in front of the main gate for a press conference. They vowed to "remain faithful to the goals of the resistance and the five demands of the Hungarian people" that were at the forefront of the series of protests in Budapest before Christmas. 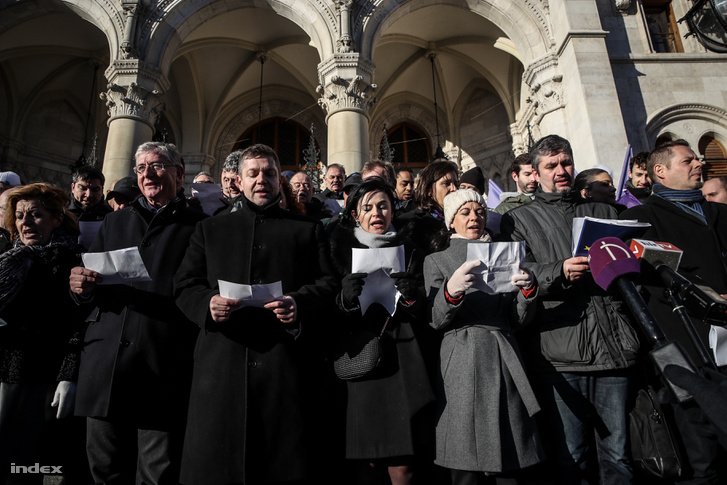 The two MPs forcefully ejected from the public media building by security staff also spoke at the press conference. Bernadett Szél said: "This is no longer a democracy, a republic, rule of law is no more." MP Ákos Hadházy added: "We can no longer speak about democracy if there is no independent judiciary, no public service media, just a propaganda machine operating on a hundred billion Forint budget."

Last year's protests brought around an unprecedented level of cooperation amongst opposition parties - president of MSZP Bertalan Tóth said it's a mistake that the opposition couldn't work together that way before the elections, but the opposition is now set to "use all parliamentary and extra-parliamentary tools available" to the resistance that is already about more than just the overtime act; it extends to the independence of the judiciary, the freedom of the press, and the state of healthcare and education. Ferenc Gyurcsány, former PM, currently an MP and the president of DK said that the most important thing for the moment is the "complete cooperation against Orbán's system," and that "once democracy returns, the disputes natural to a democracy will have a chance to resurface, but they are secondary as long as democracy itself is in peril."

The next large protest organised by the trade unions, civil society organisations, and opposition parties will be on Saturday. Protesters will once again march from Heroes' Square to Kossuth Square, and according to the protest's Facebook event, there are almost 40,000 people interested in attending so far. 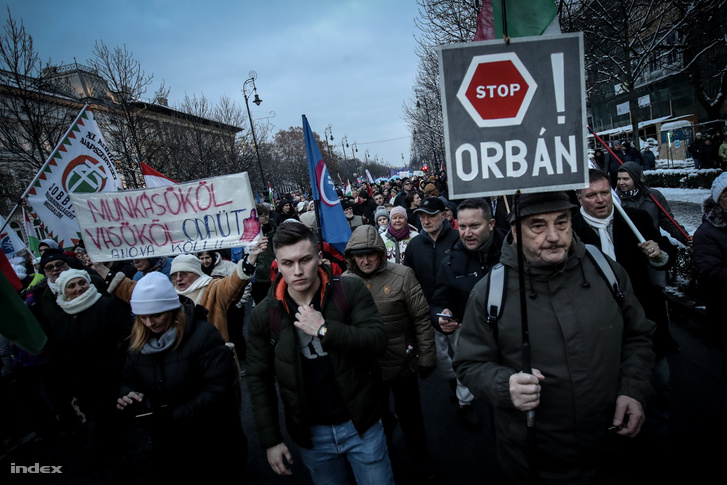 The Hungarian Federation of Trade Unions will also participate. They are likely to announce the general strike provisioned in late December - the unions are demanding the abolition of the overtime act, a labour code that better protects workers' interests, a minimum 10% increase of the minimum wage, new strike regulations, and a more flexible pension system.

Fidesz released a statement saying the opposition is only interested in the "political scuffle of the moment" and in gaining power, and that the "violent street protests" were funded by George Soros, and Soros's activists attacked the police before Christmas in order to sway the European Parliamentary elections towards a pro-immigration EP majority.

(Cover photo: Members of the opposition gathered in front of the Parlaiment main gate for  a press conference in Budapest, January 3. 2019. Photographer:  Huszti István / Index)