Donald Trump to Orbán: "You're controversial like me, but you did a good job" After being snubbed by the Obama administration and kept at an arms length by President Donald J. Trump for the first two years of his presidency, Hungarian Prime Minister Viktor Orbán finally gets his private audience with the President of the United States of America to "deepen cooperation on a range of issues, including trade, energy, and cybersecurity," and they will celebrate Hungary's 20-year NATO membership, as the short White House press release states. The US and Hungarian delegations are set to take part in a plenary meeting following the meeting of Trump and Orbán.

Following the 30 minute meeting, Trump and Orbán made statements for the press.  Donald Trump said Orbán did a "tremendous job in many aspects," adding Orbán is "controversial like me," but commended him saying "you did a good job and kept your country safe." He added that Hungary is a member of NATO, and a "good member of NATO."

Orbán, after asking for a chance to speak, said that he is "proud that a lot of Hungarians contributed to the progress of the United States," and he said he's feeling young again as he visited the White House for the first time twenty years ago. Orbán said he is looking forward to strengthening the strategic alliance between the two countries at the plenary meeting, pointing out how their approach is similar with Trump concerning illegal migration, terrorism and the protection of Christian communities all around the globe and that Hungary is proud to stand together with the United States. Orbán said that the Hungarian government governs for the people and by the people. Trump told Orbán that he has been "great with respect to Christian communities," and added that the "relationship is really good with Hungary."

When asked about Hungary's democratic backslide, Trump said Orbán commands a lot of respect, and with regards to migration, he said: "You look at some of the problems that they have in Europe that are tremendous because they've done it a different way than the Prime Minister." Orbán said he governs "From the people, by the people, and for the people." Before journalists could have asked more about the state of democracy in Hungary, Trump interjected saying "Don't forget, they're a member of NATO, and a very good member of NATO, I don't think we can go into too much of a discussion unless that's mentioned." After this, the press conference veered off to questions of US domestic politics. 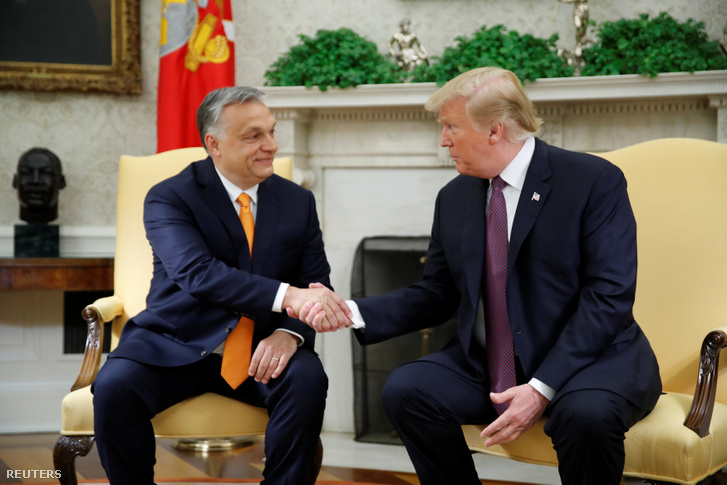 Viktor Orbán and Donald Trump in the White House on 13 May 2019.
Fotó: Carlos Barria / Reuters

After the meeting, the US and Hungarian diplomatic delegations are set for a plenary meeting where Péter Szijjártó, Hungary's Minister of Foreign Affairs will participate. As Trump said, they will be discussing "trade, and lots of other subjects."

The last Hungarian PM to meet a US president was Ferenc Gyurcsány who was invited to Washington DC by George W. Bush in 2005, before that, Viktor Orbán met Bill Clinton in 1998. The 2010 start of Orbán's second term brought about a cooldown in the relationship of the two countries: the Obama administration did not take kindly to Orbán weakening Hungarian democracy.

As it became apparent in February, there are still clashing interests between Trump and Orbán, despite their matching rhetorics on the issues of terrorism and migration and despite the fact that Orbán was the world's first government leader in office to endorse the Trump campaign back in July 2016. At the press conference in February, Pompeo expressed his regrets over the US neglecting the Central European region, because as he put it, that absence necessarily brings about the "presence of the USA's competitors," warning Hungary at the same time about the dangers of Russian and Chinese influence.

China is currently in the process of building a heavily overpriced railroad between Budapest and Belgrade within the framework of the Belt and Road Initiative, and as we have reported earlier, International Investment Bank, the former bank of Comecon recently revived by Vladimir Putin, is moving its headquarters to Budapest while getting all conceivable immunities from the Hungarian government, which experts say could provide cover for Russian intelligence maneuvres.

In a letter addressed to the President last week, a bipartisan group of US senators expressed their concern that Trump may turn a blind eye to Orbán's "ongoing attacks on democracy," and complained that Orbán's actions are compromising the security interests of the US citing the new Budapest headquarters of IIB. The senators urged President Trump to postpone the meeting until after "Prime Minister Orbán returns his country to the path of democracy and respect for human rights."