7 dead, 21 missing after sightseeing boat collides with cruise ship on the Danube in Budapest This article was continuously updated as information became available.
Latest update: 21:30, 30 May 2019

Wednesday night at 9:15 PM, a sightseeing boat named Hableány collided with a river cruise ship on the Danube in Budapest near the Parliament. As a result, Hableány toppled over and sank with 35 people onboard including the two-member crew, two tour guides and 31 tourists from South Korea. Low visibility and the strong current of the flooding Danube made rescue efforts even more difficult, the wreckage near the base of Margit bridge was only found at 1:30 AM. Since then, a crane vessel arrived near the scene of the accident at around 7:00 PM on Thursday and the first diving operation has already taken place.

The accident happened after Hableány, a 27-metre, 40-ton sightseeing boat manoeuvred itself in front of the 135-metre, 1000-ton river cruise ship Viking Sigyn, just as they were about to pass under Margit bridge heading North. At 9:05 PM Wednesday night, the cruise ship hit Hableány from the rear as they were approaching the bridge, and within seven seconds, the sightseeing boat toppled over and sank with 35 people on board: 31 South Korean tourists, their two guides and the two-member Hungarian crew of the vessel.

Seven people died in the tragedy and seven were injured, one of them is still in the hospital with fractured ribs. The seven survivors were rescued by civilian boats, but authorities are still searching for the 21 people who are missing. Rescuers say that the strong current of the flooding Danube and the 10-12 °C water temperature does not allow for much hope of finding more survivors.  Since then, police have released the following video footage of the accident:

The seven survivors and the seven victims are all citizens of South Korea, as of yet, there is no information on the boat's Hungarian crew members. The South Korean Minister of Foreign Affairs will travel to Hungary as soon as possible.

In a phonecall on Thursday afternoon, South Korea's President Moon Jae-in asked Hungarian Prime Minister Viktor Orbán to keep on expending all efforts in the search operation for the missing South Korean tourists and expressed his gratitude for what the Hungarian authorities have already done. Moon ordered Minister of Foreign Affairs Kang Kyung-wha to form an operative team to cooperate with the Hungarian authorities in the search. The team will be heading to Budapest on Thursday.

Hvg.hu found that families of the seven identified South Korean victims will be flown in to Budapest as well by the South Korean travel agency that organised the trip of the group involved in the accident. According to Hungarian newswire MTI, the 38 family members will arrive to Hungary on Friday.

Police are launching an investigation suspecting a criminal endangerment of water transport resulting in a mass catastrophe.

At 9:05 PM, police announced that they have taken C. Yuriy, the 64-year-old Ukrainian captain of Viking Sigyn into custody, and officers are interrogating the captain as a suspect. The Hungarian police called a nautical expert into the investigation and detectives checked the ship Viking Sigyn and also confiscated evidence.

Rescue operations involving 96 firefighters, special equipment, and divers of the Hungarian Army started the rescue operations last night that are now focusing on the entirety of the Hungarian section of the Danube south of Budapest. Civilian boats started rescuing the victims of the accident, as heard on the audio recording released Thursday evening by Hungarian radio station Trend FM:

At 9:30 PM on Wednesday night, the bodies of the first two victims were lifted from the Danube near Rákóczi bridge around five kilometres from the location of the accident, and other victims were found near the southern section of highway M0 until 11:36 PM, approximately eleven kilometres downstream from where the two vessels collided.

As of Thursday afternoon, the search and rescue operations are still underway. Around 9:15 Thursday morning, a larger military vessel arrived at the scene of the accident as reported by our colleagues on location. The operations are delayed by the strong currents of the flooding Danube; the rescue divers cannot work due to the harsh circumstances. 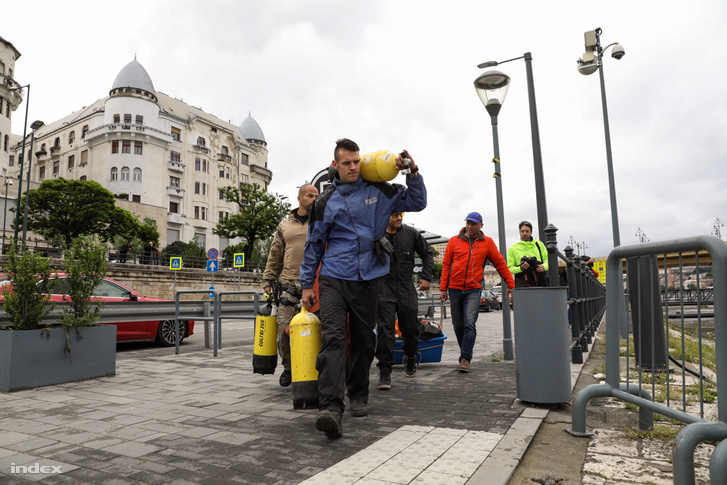 The military rescue boat is anchored near the base of Margit bridge which was closed for pedestrian traffic on Thursday early in the afternoon. A pontoon bridge is being built to provide divers access to the location of the shipwreck.

Speaking as an expert, industrial diver Richárd Sopronyi told MTI on Thursday afternoon that in the present conditions, it could be days, or even a week until the shipwreck could be brought to the surface. The Danube's level is two metres higher than the level divers are allowed to work at, but as the ongoing preparations indicated, rescue workers were going to attempt to go under the surface.

Our colleague on the spot reported that at 4:00 PM, divers and members of special police force TEK were taken to the location of the shipwreck by lightweight boats, where they started scanning the water below with what appeared to be a sonar. At 6:00 PM, divers have not yet submerged.

At around 7:00 PM, a large crane vessel arrived near the location of the shipwreck, but it is currently standing by at a nearby dock. Our colleague on the spot reported that one of the divers has already been under the surface, however, returned shortly. 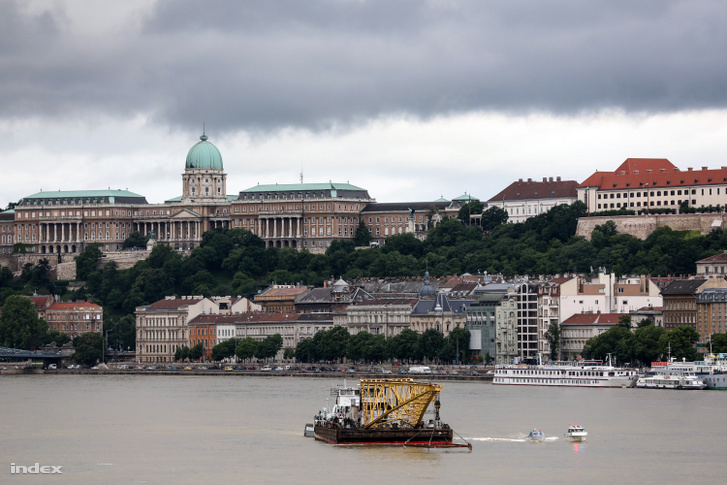 South Korean news site Chosun.com spoke to several survivors of the tragic ship accident on the Danube. One of them told the site that at the moment of the collision, there were around twenty people on the deck and approximately ten people inside the boat's cabins below.

31-year-old Jung-mo said that he could see the cruise ship approaching, but he would never have thought that it would end up hitting their boat. Jung survived by finding a lifebuoy after he fell in the water as the cruise ship immediately turned the sightseeing boat over following the collision. Jung threw the rope tied to his lifebuoy towards 32-year-old Yoon Seo, who also survived thanks to this. Yoon told the paper: "The boat capsized and sank in a moment, the people on the deck all fell in the water, but people in the cabin probably did not have time to get out. I saw a six-year-old girl with her grandmother on the cruise. I don't know what happened to them."

Survivors questioned the organisers' decision not to cancel the boat trip in such severe weather, and they complained that the immediate rescue operation was disorganised. Yoon told Chosun.com that the rescue team only saved those who have managed to hold on to a lifebuoy or were rescued by crew members of other cruise ships.

Police released a video of the accident at a press conference on Thursday. The footage shows that the accident happened under Margit bridge, and sightseeing boat Hableány toppled over and sank within seconds after suffering a run-on collision with Sigyn, a ship belonging to the fleet of Viking River Cruises. Police official Pál Adrián told journalists that Hableány changed its course shortly before the accident, which is how it ended up in front of the cruise ship.

Two vessels were involved in the accident: One is sightseeing boat Hableány, a 40-ton, 27-metre passenger boat built in the Soviet Union in 1949, operated by Panoráma Deck Kft. since 2003. The other one is the 135-metre Sigyn, just finished in 2019 - the 1000 ton cruise ship of Viking River Cruises was headed North to Passau. After the accident, Sigyn docked at Jászai Mari square and is currently under police lockdown. The marks of the accident are clearly visible on the front of Sigyn's hull: 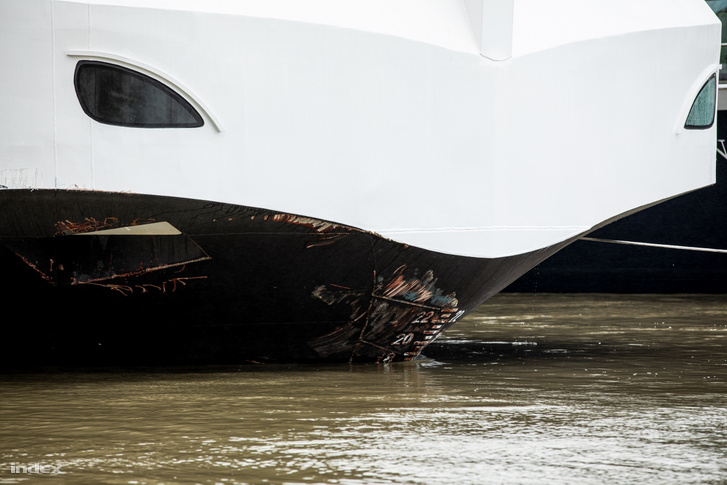 Hungarian Minister of Human Capacities Miklós Kásler held a press conference at the traumatology of the Uzsoki hospital in Budapest. The Minister informed the press that the seven survivors of last night's tragic accident were treated in three Budapest hospitals: Uzsoki, Honvéd, and Szent Imre. The Minister also said that four of the seven survivors were already released from the hospitals, however, the three others are still treated, but their condition is "satisfactory."

Since then, state news channel M1 reported that two more injured tourists were released from the hospital. 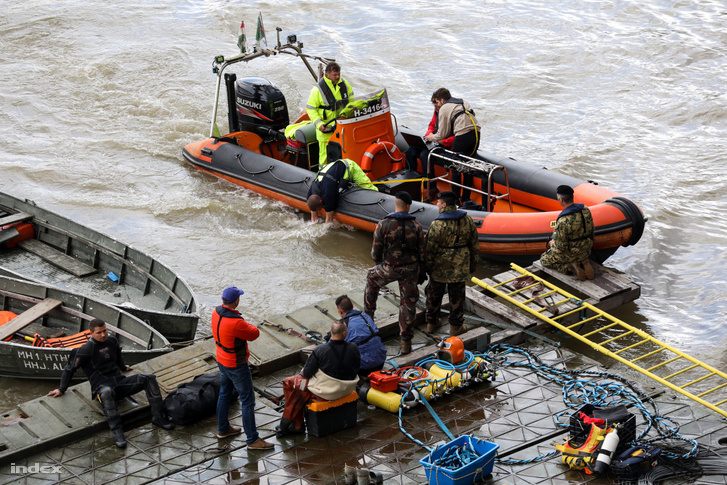 An official of South Korea's Budapest consulate added that one of the survivors is being treated for fractured ribs, the four released survivors have been placed in hotels. He informed journalists that the youngest passenger of Hableány was a five-year-old child whom authorities still haven't found.

At another press conference on Thursday, Mayor of Budapest István Tarlós said that the city will have to examine whether or not cruise ships should be allowed to dock in downtown Budapest. He said he understands how docking in the frequented parts of Budapest is good for business, however, this practice may not be the best for the safety of traffic on the Danube in Budapest. He added that the rules on the Danube are not within the competence of the Budapest municipality.