This article is constantly updated as new information comes to light.
Latest update: 18:37

The spokesman of the Hungarian Police, the Director-General of the Hungarian Counter Terrorism Centre, and the Defence Attaché of the South Korean Embassy of Hungary held a press conference on Monday morning reiterating the details of the tragic boat crash that happened on the Danube last Wednesday at 9:05 PM when 1000-ton river cruiser Viking Sigyn rammed 50-ton sightseeing boat Hableány ("Mermaid") which then capsized and sank in less than seven seconds under Margit bridge in Budapest with 35 onboard, all South Korean citizens except for the two-member Hungarian crew of the vessel. There were sevens survivors, seven were confirmed dead and 21 people (including the crew members) are still missing. Police are investigating the accident and have taken the 64-year-old Ukrainian captain of the Sigyn into custody as a suspect, who denies misconduct.

Here is what we know since:

At a press conference on Monday, the spokesman of the Hungarian Police confirmed that the first emergency call arrived at 9:15 PM from a citizen on Wednesday, ten minutes after the accident happened. The first responding patrol boat arrived at the scene simultaneously, followed by the first emergency vehicles at 9:19 PM and the first police patrol at 21:29, and the spokesman added that this first call reported an incorrect location.

The representative of the police informed that there are 158 rescue workers, 47 vehicles, 16 vessels, and two helicopters are currently taking part in the search for the 21 people who are still missing. 10
Shun-Keun Song with the latest image of the Hableány taken by the high resolution sonar provided by Norway. The image shows Hableány laying on her side at a depth of 9 metres.Galéria: angol galDeadly boat crash on the Danube: Divers forbidden from entering shipwreck despite plea from South Korean Defence Attaché(Fotó: Ajpek Orsi / Index)

Director-General of the Counter Terrorism Centre: Divers are forbidden to enter the hull

Speaking at the same event, Director-General of TEK, János Hajdu listed a few facts concerning the accident: Hableány, the sightseeing boat rammed by Viking Sigyn is 27.2 metres long, 7.8 metres wide, 5.2 metres tall, and it weighs around 50 tons. Hajdu added that the Danube's water level was at 501 centimetres at the time of the accident and it is at 517 centimetres now, and the Hableány is currently 9 metres under the surface of the Danube. There is zero visibility in the 12-15 °C cold, 450-metre wide river that transfers 5000 cubic metres of water every second, and the speed of its flow is 4 m/sec, which makes diving dangerous and difficult.

Hajdu said that after receiving the order from the Minister of Interior Affairs, the first thing TEK did was to establish a crisis centre the next day in order to devise the strategy of the operation. There were two competing approaches:

The Director-General stressed that neither option enjoys priority so far, but later on in the press conference Hajdu said that they are trying tp bring the possible victims to the surface as soon as possible, which is a "priority task" that they will perform whatever it takes, except for entering the hull. Hajdu said that entering the hull would pose such mortal dangers that it is strictly forbidden.

The first time divers tested the waters was on 30 May (Thursday) at around 8:00 PM, but the force of the current even made movement impossible for the divers, not to mention getting any work done underwater. The diver could not even separate from the ladder, therefore he shortly returned to the surface. In normal circumstances, the diver would need to let go of the ladder, and walk or crawl on the surface to the wreckage, however, these were not normal circumstances according to Hajdu.

The second attempt was made the next day at 1:00 PM, and with a different approach: The experts attempted to dive "in the shadow" of the bridge where the current could have been slower, but the situation was the same as it was on the first day. During this second dive, the diver's so-called "inflation hose," used to inflate the diving suit if necessary, got caught in the diving ladder, and a second rescue diver had to jump into the river to cut the hose and free his colleague. This hose, as Hajdu explained, runs separately from the diver's main umbilical that houses his air supply hose and the communication cable and which is strong enough to lift the diver from the riverbed. A larger crane vessel is needed, but levels of the Danube prevent it from approaching the scene

Hajdu informed the press that all technical equipment that is required for the boat's recovery has already been transported to the area where the accident occurred, except for the crane with a 200-ton lifting capacity. The crane vessel Táncsics moored a little bit north of the Parliament since last week, has only a capacity of 50 tons. However, rescue workers will have to wait for the larger Clark Ádám crane vessel, because it cannot yet approach the location of the shipwreck as the high water level of the Danube prevents the large ship to cross under the bridges of Budapest.

Hajdu announced that at the time of the press conference (11:00 PM), divers were already working in the riverbed - a diver managed to separate from the ladder and was at the time on the bottom of the Danube attempting to survey the wreckage. Hajdu said that the divers will be looking for and creating lifting points on the hull, and they will do everything within their power to carry this out in a way respectful to the victims.

Hajdu thanked all the civilian and official participants of the search and rescue operation and lauded the wide-spread international cooperation. He told journalists that the South Korean government sent a 54-person delegation to aid the Hungarian authorities in the recovery of the 21 missing people, and added that 27 of them are specially trained expert divers, noting that Austria also sent the special diving team of the Cobra counter-terrorism unit, the Czech Republic offered an underwater drone and four specially trained divers, and the wreckage was eventually located and diving points were established with help from a high-resolution sonar that arrived from Norway. TEK has since released a composite picture showing the sonar image superimposed over Google Earth graphics: 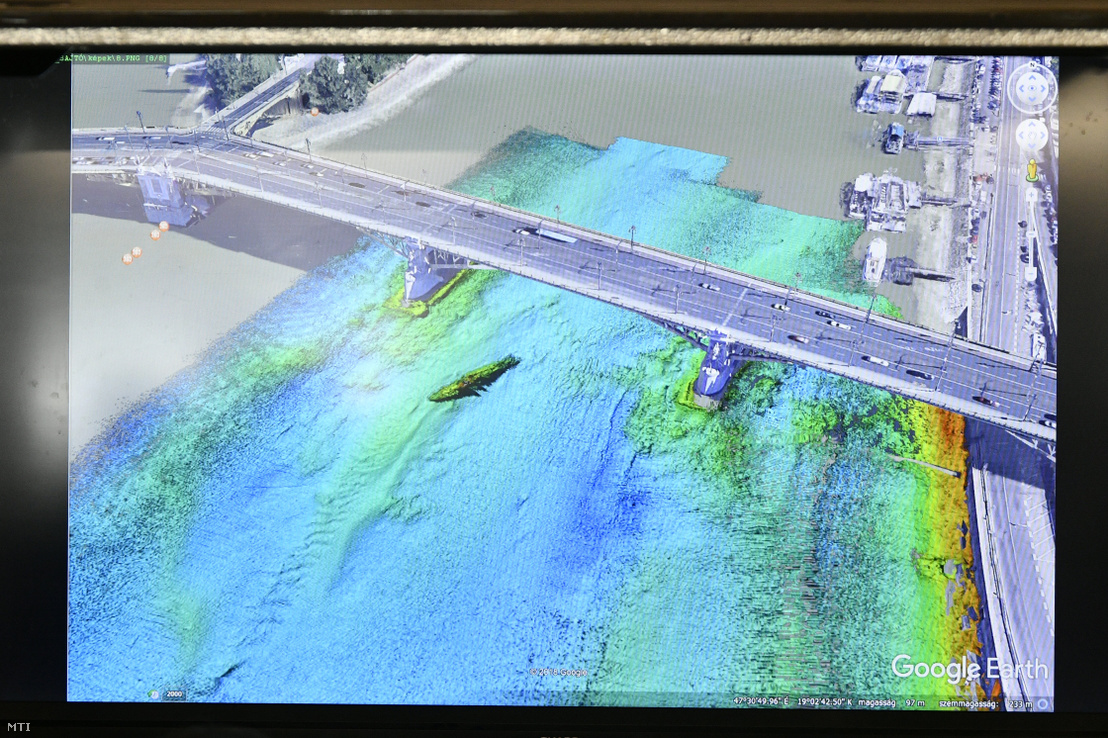 Hajdu presented the search party's plans for the week: As the weather and the state of the Danube permits, they will be conducting more dives to examine the shipwreck in order to see how they could bring victims to the surface, but as it was mentioned above, it is strictly forbidden for divers to enter the hull as their safety is a priority.

There are several possible methods of safely lifting the shipwreck on the table, but it is paramount to make sure that the hull does not split in two, but that is only a goal, "We do not yet know how that will be accomplished, but we will try," as Hajdu explained.

He also informed about the organisational structure of the search party. The Director-General said they have formed a diving workgroup of experienced civilian and official divers, a workgroup responsible for the technical side of the recovery effort, there is a logistics workgroup, and also the full reanimation team of TEK is on the site, and the Honvéd army hospital is constantly standing by to treat any possible injuries occurring during the operation. There are two crisis team meetings every day, where the key questions surrounding the international operation are decided.

South Korean Attaché: We respect the decision of the Hungarian Authorities

The Defence Attaché of the Korean Embassy, Shun-Keun Song added that South Korea respects the decision of the Hungarian authorities to first lift the Hableány from the Danube and at the same time asked the citizens of Hungary to immediately contact the authorities if they discover any bodies in or around the Danube.

He added that in light of the facts that the 27 divers from South Korea are the best experts the country can offer and that grieving relatives are eagerly waiting for any news about the remains of their loved ones, he requested the Hungarian authorities to give permission for the South Korean divers to enter the hull, however, the Hungarian party considers the life and limbs of the divers a number one priority.