FAQ: Why is it so difficult to recover the victims of the Hableány's tragedy? Why couldn't they lift the wreckage of the Hableány from the Danube in a week? Why don't the divers enter the hull? When will the crane capable of lifting the Hableány start working? What would happen if the hull would break? We collected the most important questions surrounding the crash of the sightseeing boat Hableány and the river cruiser Viking Sigyn and tried to find answers.

First of all, here is the latest information:

According to the experts participating in the search operation, the high water level of the Danube, coupled with the strong currents are hampering their efforts considerably. Last Wednesday, at the time of the accident, the Danube was at 501 centimetres, and the river kept swelling in the following days. The first diver could go into the river on 30 May,  but only to see if the conditions permit underwater work, which they did not - the diver could hardly even move, let alone separate from the ladder. The next day, another attempt was made at a place from where the stronger currents are diverted by the pillar of Margit bridge, however, conditions were not any better there either. 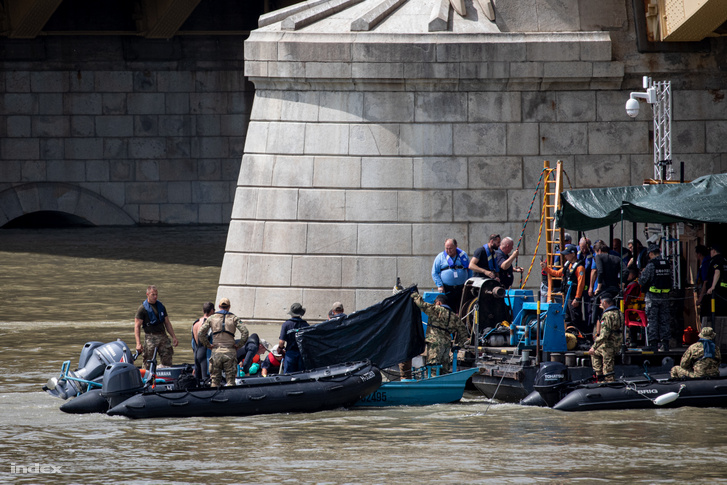 The level of the Danube went down by Monday and so did the speed of the flow, however, it was still difficult for divers to move underwater, but they managed to find the wreckage and even brought victims to the surface. As reported by HVG, the body recovered on Monday was found by Hungarian divers in the morning, and they marked the location so the South Korean divers could bring the victim up later on. Our information suggests that the body was accessed through a door or a window from the outside, no divers entered the hull, but even this is an extraordinary achievement for the divers who usually dive at water levels around 300 centimetres.

The latest available forecast of the Danube's level is for 10 June, and it will still be around 387 centimetres then.

The president of disaster relief NGO Havária, Zsolt Szathmári told Index that such a recovery effort could last for weeks even in normal circumstances at lower water levels and slower currents. He also said that divers are under a tremendous amount of international and domestic pressure with their work always being questioned, even if he himself has never seen such professionalism in terms of cooperation and the coordination of the rescue efforts.

If the shipwreck has already been located, why didn't the recovery of Hableány start yet?

A large, high-capacity crane vessel is needed to lift the 50-ton Hableány from the Danube. A large crane-vessel did appear near the scene the day after the accident, but it can only nominally lift 50 tons, the crane's arm most likely couldn't handle the weight of Hableány. There is only one crane vessel in Hungary that can lift that much, the Clark Ádám has a 200-ton capacity, but the tall ship cannot fit under the bridges as the Clark Ádám can only access the location of Hableány if the water level is under 400 centimetres, therefore the rescue team is waiting for the Danube to go down.

The crane vessel departed from Komárom on Wednesday morning, but it's unsure when it can be used. According to the Hungarian Hydrological Forecasting Service, the Danube will only be around 400 centimetres on Saturday. 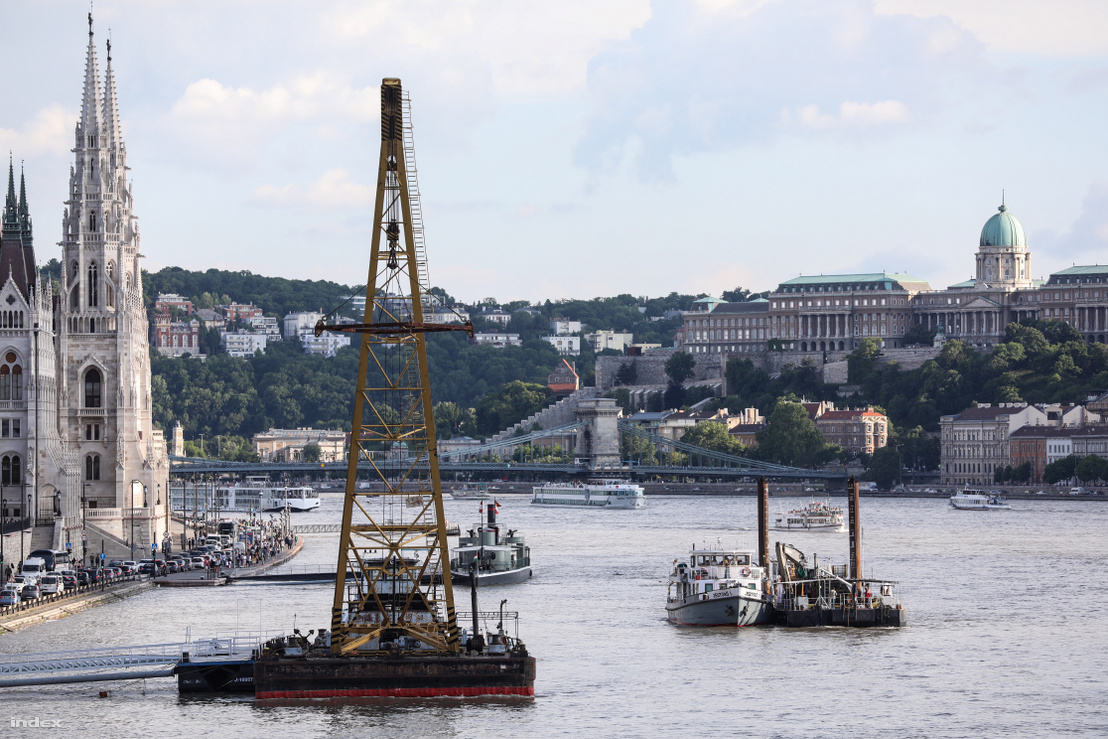 The first, smaller crane vessel standing by near Margit bridge on 31 May 2019.
Fotó: Ajpek Orsi / Index

How are they planning to recover the Hableány?

After the meeting of the Parliament's National Security Committee on Wednesday, Interior Minister Sándor Pintér said that the Hableány will not be lifted from the Danube at its current location next to Margit bridge, but will first be lifted just enough so it can be towed to a location where divers can safely enter the hull.

Sándor Götz, the expert of Hungarian water transportation company Mahart told Index that the Hableány will most likely be recovered using a crane and a lifting frame. With this method, a certain number of lifting slings will have to be pulled through under the shipwreck and attached to each other in order to make sure that they do not dislocate as the Hableány is moved.

When will they lift the Hableány from the Danube?

Nobody knows. It's not even sure that the Hableány can be lifted without the hull breaking in half. Hungarian state newswire MTI reported on Wednesday that the recovery will definitely not start on Wednesday, and Thursday seems highly unlikely as well.

The captain of the Clark Ádám said on Wednesday afternoon that a 420 cm water level would allow the crane vessel to safely approach the shipwreck.

What difficulties are likely to arise during such an operation?

First of all, as it was detailed above, even accessing the wreckage is difficult due to the low visibility and the strong currents, and divers need to map the area of the shipwreck in great detail before the lifting can even be planned. Secondly, the Hableány was an old ship, there is a possibility that the hull will crack if it's moved. Nobody can guarantee that the hull remains intact as the crane is lifting it from the Danube, and if it breaks, the bodies still in it could fall back into the river. 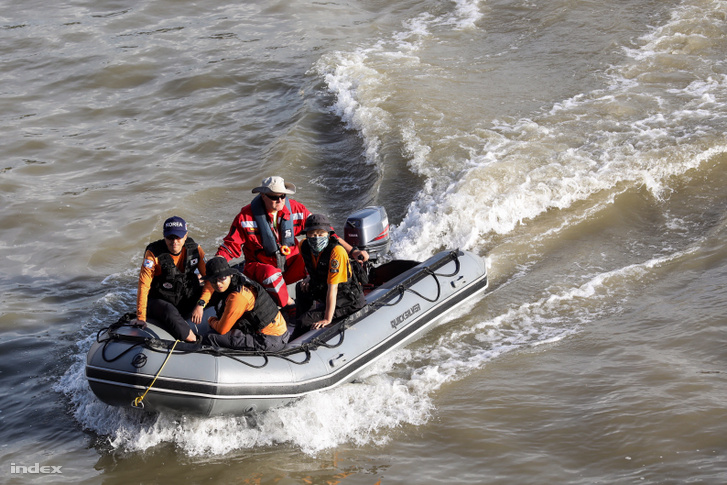 Could there still be victims in the hull?

It is likely that there are still bodies in the Hableány, as many were under the deck at the time of the accident, but it is dangerous, therefore forbidden for divers to enter the Hableány - as Interior Minister Sándor Pintér said, nobody knows the injuries the hull might have sustained, and nobody knows what "traps" could await divers in there, and according to the Minister, the South Korean team agrees with the decision of the Hungarian authorities to stay out of the boat.

Why did the South Korean team dive on Monday afternoon? What do they know that the Hungarian divers don't?

Preparedness does not depend on the nationality of the diver but on where and how they have dived before. Diving requires a completely different skillset on rivers and on the seas. In Hungary, divers usually go under alone while being supervised from the surface with a second diver standing by to provide immediate help in case of an emergency. South Korean divers work in pairs, mostly for psychological reasons. From what we've heard, the Hungarian, South Korean, Austrian, and Czech divers are cooperating well. Diving teams of different nationalities take turns in the Danube, and they use video footage of the dives to assess the situation. The divers use extraordinarily heavy equipment to prevent the currents from lifting them from the bottom of the river. As the Danube is flooding, visibility is almost zero - in normal circumstances, divers would be able to see around three metres ahead, but even if the flood goes down, it would take weeks for the water to settle down. 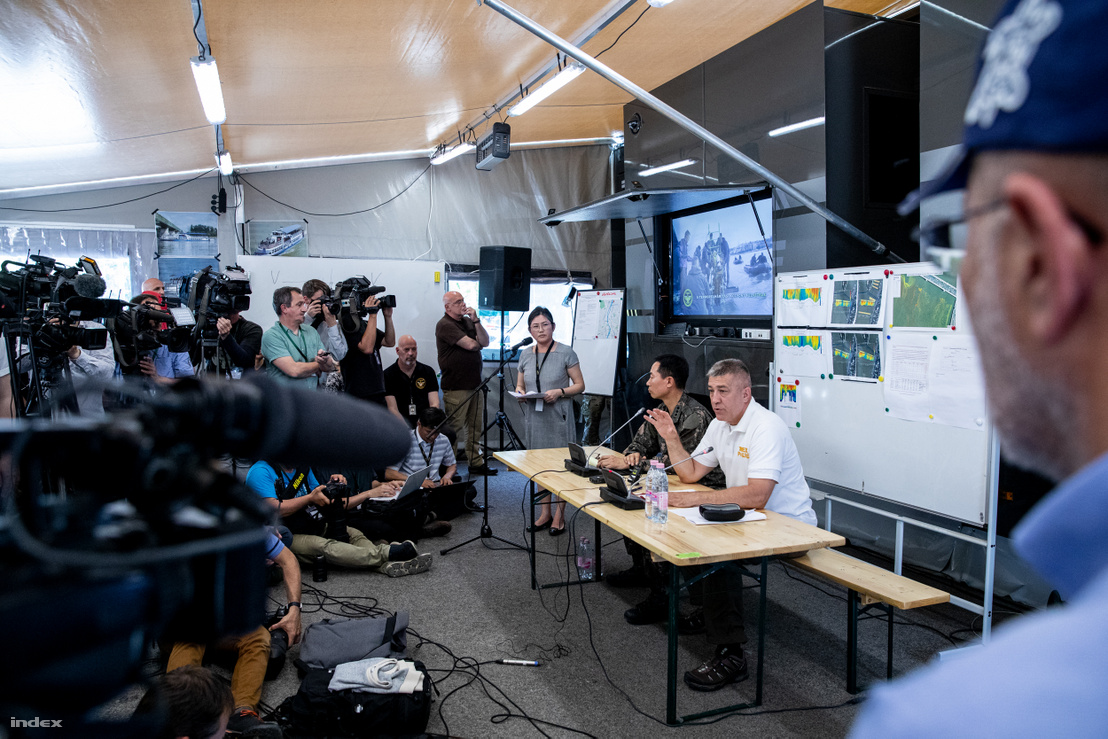 What tasks are divers performing now?

János Hajdu, the Director-General of the Hungarian Counter Terrorism Centre told journalists on Monday that the divers are surveying the wreckage of the Hableány. Divers are looking for attachment points on the hull that can be used for lifting the ship from the riverbed. The divers are also bringing any victims they can find and access to the surface.

Who is in charge of the recovery operation?

Minister of Interior Affairs Sándor Pintér tasked János Hajdu, the Director-General of the Counter Terrorism Centre with coordinating all efforts related to finding the missing victims and lifting the Hableány from the Danube. The Hungarian authorities and rescue services have allocated 621 people for the operation, and there are 15 police boats scouring the entire Hungarian section of the Danube south of Budapest. The president of the Havária NGO said that the operation is well-coordinated and that they are immediately provided with whatever equipment that becomes necessary.

How could Viking Sigyn, the river cruiser that rammed the Hableány last Wednesday, leave Hungary after the accident? Who allowed that?

Following the accident, the ship moored at the closest possible quay, as the press office of the Hungarian Police stated in response to our questions. The police and experts immediately carried out all the necessary steps required by the ongoing criminal investigation - they examined Sigyn, confiscated evidence, and interrogated all the passengers, and as the police stated, "there was no reason to retain the ship any longer." At the same time, the South Korean Ministry of Foreign Affairs requested the Hungarian authorities to place the cruiser under a temporary lockdown, which in practice would mean that Sigyn has to return to Budapest and remain there until all the details of the accident have been cleared up by the authorities. 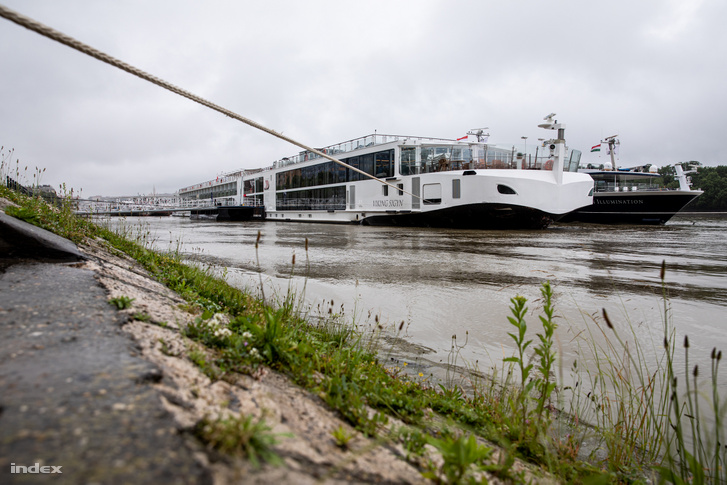 This article is the slightly updated translation of the original published by Index.