How can Budapest establish a brand new metro line in two months? Budapest currently has four metro lines. The latest one, M4 was first conceived in 1976, but the construction only began in 2006 and lasted 8 years, and by the time the 7.4 km long line was completed, it ended up costing more than 450 Billion Forints (~€1.4 Billion). However, Budapest now plans to add a new, approximately 10 km long metro line to the city's map of public transportation in two months, at virtually no cost.

How is that possible? It's easy;  the municipality of Budapest decided to rename a suburban railway line to metro line 5, effective from 1 September 2019.

The decision sent shockwaves through the Hungarian corners of the Internet, and through politics as well - opposition party DK's press release, for instance, mocks the decision by calling it a real miracle weapon for urban development before suggesting to rename the Forint to the Hungarian Euro, so the whole world could be awestruck by Hungary's €100 000 minimum wage, and to rechristen the two islands on the Budapest section of the Danube as the Maldives so all Hungarians could brag about their luxury holidays.

But there is actually sort of an explanation for the absurd move.

The document called Budapest Mobility Plan 2030 was ratified by the Budapest General Assembly states that the new designation was warranted by a large number of passengers and the line's importance. At the same time, the municipality requests the Government to amend their decrees concerning suburban railway line developments to accommodate transforming the H5 suburban railway line's inner section (from Batthyány square to the Békásmegyer stop) to metro operation. There are plans to take the line below the surface in the long run in order to alleviate the traffic problems of Budapest's III. district which stem from the fact that the tracks split the district in two, allowing the district's car traffic to cross over to the other side through only four level crossings.

But that is the future, yet the new name of suburban railway line 5 is effective from September, although that could be an expression of intent from Budapest's part beginning a long struggle over who will get to develop the line and how.

There are two competing concepts. One is tied to the duo of MÁV-HÉV Zrt, the subsidiary of the Hungarian State Railways (MÁV) operating the suburban railway lines and the KKBK, or the Center of Priority Government Investments, and the other one is from BKV-BKK and the Budapest municipality.

The first concept is obviously more railway-oriented which would offer cheaper solutions for the line's problems faster, however, the other, grander concept would integrate the line into the metro system. Both of these concepts would bring H7 (travelling south on the left side of the Danube) downtown under the surface until Kálvin square. But while the railway-lobby would keep things simple with a cheaper track renovation on H5 and with new (railway) cars, the Budapest municipality would tie the suburban railway line in with the metro system, and connect H5 (travelling north from Batthyány square on the right, Buda side of the Danube) to H7 at Kálvin. The III. district municipality added that H5 (M5 from September) should travel under the surface all throughout its Budapest section, thus eliminating all level crossings hampering the district's traffic. 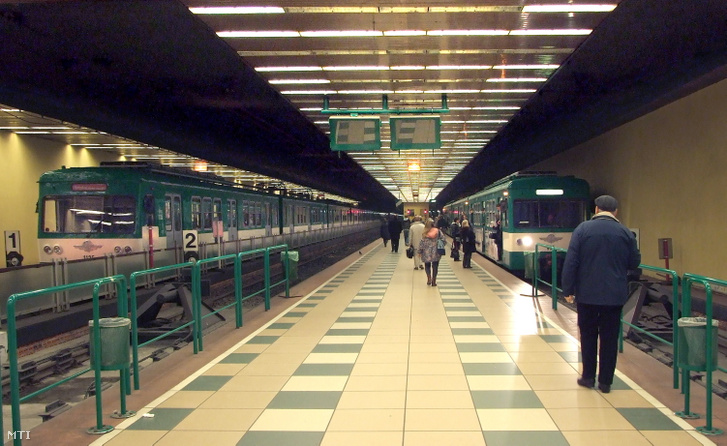 The city of Budapest notes that transforming the H5 suburban railway into a regional express railway would tear the lines out of the Budapest public transport network, especially in the case of H5, as the latest survey showed that the majority of the line's passengers use it within city bounds. According to the municipality, if the line would operate with a tighter schedule and metro cars, passenger numbers could be as high as those of metro line 2 and 3. An expert who previously worked for the city of Budapest, János Tyíremeter told Index that this re-categorisation had been in the works for quite some time, as with the developments made to the line since the 1970s, the line more-or-less meets the requirements of a metro line in many aspects. He thinks that the aim of this reclassification is to make the line eligible for EU funds available for metro developments, and this way, these developments could begin much earlier.

The fate of the line is still an open question though, and we will only know which concept comes out on top after the call for the public tender for developing the line is published in the autumn.