Hungary at the top of OLAF's fraud statistics

OLAF, the European Union's anti-fraud agency recommended the recovery of nearly 4% of all EU financial support provided to Hungary in the 2014-2018 period. In 2018, the agency carried out the highest number of investigations in Hungary, but despite the warnings, Hungarian authorities refused to launch procedures into 20 cases.

In 2018, the European Anti-Fraud Agency (OLAF) carried out the most investigations in Hungary as the report published on Tuesday states. In 2018, the agency responsible for detecting fraudulent misuse of EU funds

OLAF concluded four-fifths of the Hungarian cases with recommendations made to the national authorities. In comparison, OLAF found evidence of misuse of EU funds in three-quarters of Greek, little over a third of Polish, and half of the other countries' cases mentioned above. 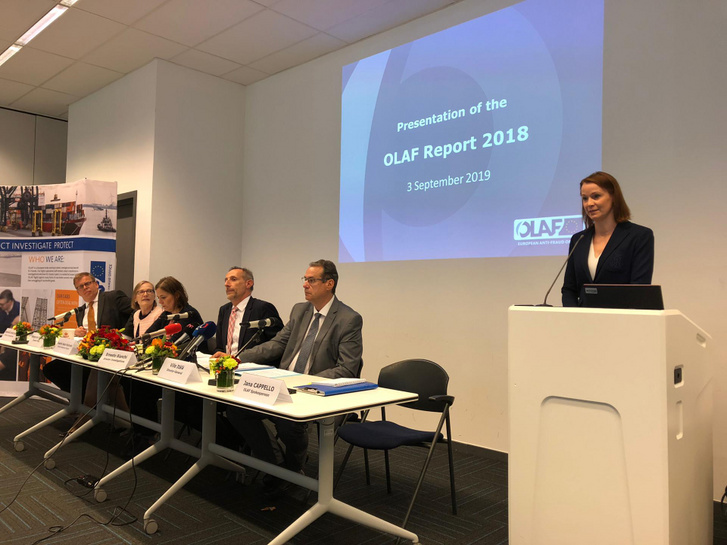 The press conference about the report on 3 September 2019
Fotó: OLAF Press Office

Altogether, there were 86 investigations concluded by OLAF in EU member states, candidate states, and other partner states, and there are 414 cases still pending. The information about the countries in which unfinished investigations are taking place is understandably not public, however, what can be known about them is that they mostly concern the EU's Structural and Investment Funds which is from where Hungary also tends to finance its large projects.

The report explicitly mentions a Hungarian case where two, closely affiliated companies altogether received a sum of €12 million to develop broadband networks in two separate projects. The two companies subcontracted these projects to the same general construction company, who further subcontracted the job, and this went on for four further levels. The aim of this complicated chain of contracts was to get €4.9 million back to one of the original two companies. OLAF requested Hungarian authorities to launch a probe into the case, and recommended the European Commission to recover €3.6 million as damages.

The severity of the Hungarian misuse of EU funds is shown by the fact that between 2014 and 2018, OLAF advised the recovery of 3.84% of development funds provided to Hungary.

The EU average is only 0.45%. That ratio is only 0.40% and 0.31% in the oft-mentioned Romania and Greece respectively, while Poland was recommended to pay back 0.12%. Of course this does not mean that member states actually have to pay these sums back, much depends on how well the European Commission and the member state authorities manage to cooperate throughout the further procedures.

The document also shows that between 1 January 2012 and 31 December 2018, the Hungarian authorities started 20 investigations upon OLAF recommendations, and charges were raised after 9 of these, but the investigation was dropped in the rest of the cases. This means that the indictment rate is 45%, higher than the 36% EU average - in Romania, the 84 procedures completed by prosecution yielded 25 indictments, but there were 8 out of 10 in Greece.

At the same time, OLAF made 20 other recommendations to the Hungarian authorities which prompted no activity from the prosecution whatsoever. Similarly, there are 20 untouched cases laying on the desks of Romanian prosecutors as well, and 21 in Italy.

OLAF's investigations Director Ernesto Bianchi says he sees "no systemic problem with the statistics corresponding to Hungary." At the press conference introducing the report, Bianchi was unwilling to draw conclusions from the numbers despite several journalists' questions. As he said, years of experience have taught him not to fall for apparent statistical results. "The continuous cooperation and consultation between the EU and national authorities are much more important."

MSZP's MEP István Újhelyi was not that careful in interpreting the charts: "This is far from the first occasion when OLAF publishes a dreadful report of the state-sponsored corruption of Orbán's government, but the numbers coming out now are exceedingly high." MSZP's politician says Hungary's negotiation power at the debate on the EU's seven-year budget is at stake, and that is "the sole responsibility of Fidesz," he stated.

Momentum's MEP, Katalin Cseh also thinks that "EU funds allocated to Hungary are in danger due to the rule-of-law questions and corruption cases." She stressed that EU funds should be spent differently and on different things, and it is of the utmost importance that these OLAF investigations have consequences." According to Katalin Cseh, the best way to achieve that is for Hungary to join the European Public Prosecutor's Office (EPPO).

"The question of joining the EPPO is an overly politicised one," OLAF's Director-General Ville Itälä told Index. "We are in constant negotiations, and we're hoping that in the future, all EU member states will decide to be a part of this organisation."

We have sent our questions concerning the 2018 OLAF report to Fidesz MEP Tamás Deutsch who is also the president of the European Parliament's Budgetary Control Committee. We will be updating our article as soon as we receive his answers.