In the past two weeks, the United Kingdom's Prime Minister Boris Johnson was busy trying to force his will through the House of Commons using unconventional methods. After requesting the Queen to agree to a record-length prorogation of Parliament in order to shorten the time available for the Brexit-debate, he withdrew the whip from the rebel tories and threatened the Parliament with a general election in case they twist the possibility of a no-deal Brexit from his hands thus limiting his negotiating power at the EU withdrawal talks. So far, his bold moves seem unfruitful: his government lost their majority in the House of Commons, and legislation will likely manage to oblige him to avoid crashing out of the EU without a deal on 31 October, and his plan to trigger general elections is in tatters.

The UK's ambassador to Hungary, Iain Lindsay was on an official trip to London last week. We managed to speak to the ambassador over the phone on Wednesday afternoon.

Is this the direst time for parliamentary democracy in Britain, or should we not go that far in describing the situation?

It is not a dire time, it is the sign of a vibrant parliamentary democracy. I was listening to Fraser Nelson yesterday, he is the political editor of the Spectator magazine, and I think he was right. Obviously, he is on the conservative side of politics, he is pro-Brexit, but I think I agreed with him when he was talking about the fact that we have a vibrant parliamentary democracy, and evidence of that was that yesterday those opposing a no-deal Brexit were successful in basically taking charge of the parliamentary agenda from this afternoon. Obviously, it is challenging for the Prime Minister and the government, but it is a sign that our parliamentary democracy is vibrant and healthy, we may be going for an election, we may not be, time will tell. We are in exciting political times but this is Britain, life still goes on, as it does in many other countries in very similar political crises or political situations. 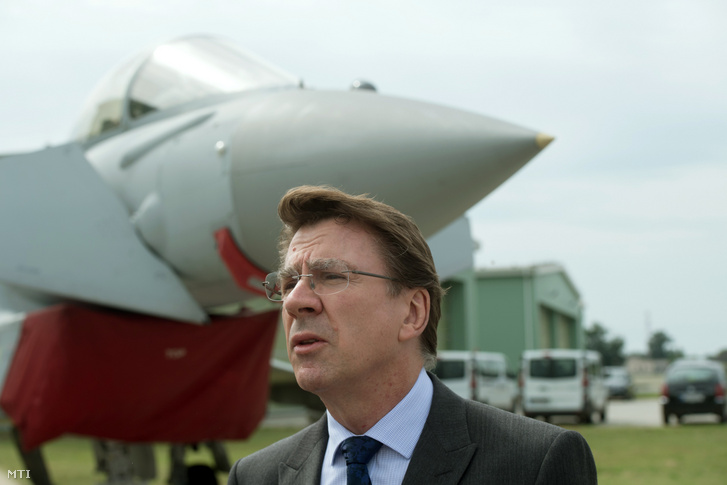 It is a reflection of an objective fact that Britain is still a country that is divided on the issue of Brexit, notwithstanding the result of the 2016 referendum that we should leave. And right now, the debate is about the circumstances under which we should leave. We will see in the next few days whether the government's attempts to call an early election will be successful. But we must not forget that in the meantime, the default position on Brexit is that if nothing else happens between now and the 31 October, we will leave the European Union without a deal. The government still wants to reach a deal with the European Union, and the events of the next few days will determine the way which the government has to negotiate with the European Union.

What is the atmosphere like in the political circles of London in these times?

Yesterday when I was in Central London, at the Foreign Office, which is next to Downing Street, right in the heart of Westminster, the atmosphere was pretty electric. There were lots of demonstrators, pro-Brexit and anti-Brexit, and other demonstrators on other issues near the Parliament. An electric political atmosphere, but also a very British one, people were demonstrating peacefully, expressing their views in a very British way.

How do you feel about this debate in general? Brexit has been dominating the political and media agenda for more than three years now. I imagine that it must be frustrating for a British person to be exposed to this topic over and over again.

I would say that Brexit has dominated political life in Britain for the last three, three and a half years, and yes, I think it is frustrating that many of the other important issues, education, health, security have been pushed back because Brexit has taken up so much of the airtime. The government has been making proposals on more police officers, more money for the health service, more money for education, more money for infrastructure projects. Precisely because they feel that we have been somewhat hamstrung in the last couple of years because Brexit has been such a dominating feature. 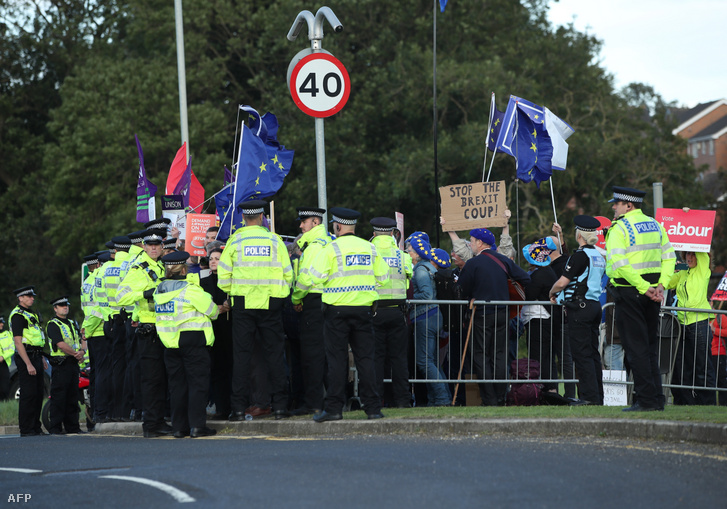 Police surround protesters against Brexit and against the government's policies with regards to Brexit as Britain's Prime Minister Boris Johnson gives a speech during a visit with the police in West Yorkshire northern England on 5 September 2019.
Fotó: Danny Lawson / AFP

Notwithstanding the Brexit negotiations, our bilateral relationship with Hungary has expanded on the political side, on the economic side, the business side, and on the defence side. There is an element that life does go on. The issue to which you refer is obviously that in the United Kingdom, Brexit has been the dominating issue, and certainly, for the government, it has eaten up a huge amount of resources and energy. I am pretty sure that both Boris Johnson and his predecessor, Theresa May as well would have liked to have been able to spend more time on other issues that are critical for the posterity and the security of the United Kingdom.

I would say that it is very clear from the opinion polls that British people are not getting bored with Brexit, in many ways the country has become more divided, in that there are fewer people that have not got an opinion. People are either pro-Brexit or anti-Brexit, there are very few people who do not have a view on Brexit, and that has indeed changed. Three years ago, there would have been a chunk of people who would have said they were not interested. Now everyone has a view on it.

How much of the anti-European sentiment can be attributed to the media?

A very significant date would be the European elections of 2014 when for the first time in over 100 years, a political party other than the Labour Party or the Conservative Party topped the polls. That was the UK Independence Party. Of course, that was a shock to the political system, and that led to David Cameron essentially offering a referendum in the 2015 general election.

Also, reflecting the fact that for many people, the rest of the world offers more opportunities, people see Britain as a global player not just as a European player. So, what I think British people are essentially saying is that "we want to take back control of our own decisions." As opposed to the fact that we are here, three years after the referendum, still trying to leave, that possibly does bear out. Some of the criticism that the EU is very bureaucratic, very allergic to change, even trying to leave is not easy. But we still want to leave, the government's position is that we want to leave with a deal, but clearly, the timetable for that is going to be up in the air, depending on what happens in the next week and the next five days in Westminster.

Will these three years of debates serve as a cataclysm that mend this division a little?

One division that everyone recognizes now is that part of the reason of Britain voting to leave was not specifically about the European Union, but about many people in Britain feeling that the world had passed them by, that politicians ignored them. In a way, globalisation has gone too far. There are many Labour MPs in the north of England, in the English Midlands representing constituencies that voted to leave because many of their voters feel that they had been ignored. And the European Union is just too remote. Even once we're out of the European Union, there will still be people, and the government recognised this, that live in post-industrial areas that need to be revitalised, such as coastal England, coastal towns. There is a job to be done on essentially renewing parts of Britain, and renewing the relationship between London, the Government, the Parliament, and parts of society that feel like they have been ignored or left behind. Everyone recognizes that. It's a phenomenon that is in a way very similar to what we saw in the United States in the presidential election in 2016, when you had large numbers of working-class democrats in traditional democrat areas voting for President Trump. Because they felt that they were left behind or deserted by their traditional party. 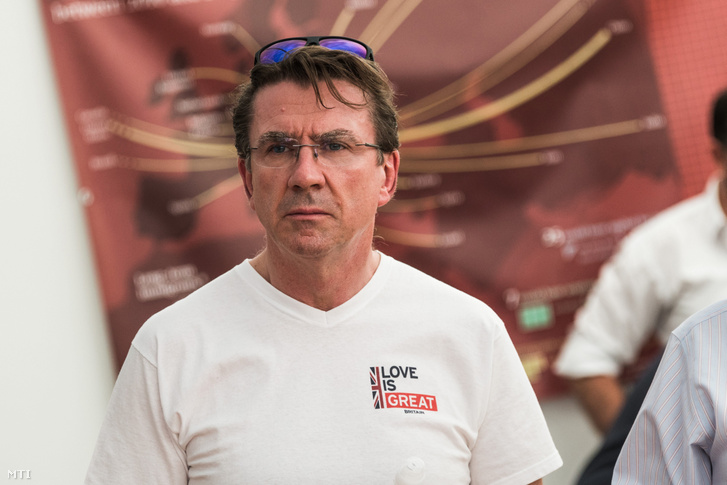 There is a job to be done certainly in healing the wounds and healing the divisions that exist in Britain, but there is no doubt that aside from that issue, we also have the question of Scotland, and what happens to Scotland after Brexit, and what happens to Northern Ireland. It needs to be seen what happens when Britain leaves the EU, whether that has a knock-on effect in terms of the unity of the United Kingdom.

So we are hoping for the best...

In the event of a deal, we have mechanisms in place, not just for the day after Brexit, there are processes in place under the implementation phase that would take us through at least until the end of next year.

Whether there is a deal or no deal, the existing acquired rights of EU citizens in Britain are guaranteed. It looks as though freedom of movement will come to an end if there is a no-deal, or will come to an end at the end of October, it looks pretty likely that we will have a transitional arrangement in place that will enable people to continue to come and live and work in the UK, something similar to getting some sort of registration or visa for some period of time after we leave the European Union.

There are 200 or 250 thousand Hungarians in the UK. the good news for them is that if they are residents in the UK on the day that we leave, their rights are protected.

This interview was first published by Index on Saturday, this article is the original English transcript edited for publication.