PM Orbán: Rule of law is a question of honour, and Hungary will fight if necessary Finnish Prime Minister Antti Rinne visited Hungary on Monday where he had bilateral talks with Prime Minister Viktor Orbán on Monday evening. At the press conference afterwards, Rinne reiterated his intention to tie EU funds to certain rule-of-law requirements, Orbán sais rule-of-law in Hungary is not a legal question but a question of honour, and that the current proposal on the table is nothing more than a mere political slogan in its present form.  The Hungarian PM also confirmed Olivér Várhelyi's nomination for the European Commission, replacing former Minister of Justice László Trócsányi who was rejected by the European Parliament's legal affairs committee.

Finland currently holds the Presidency of the European Council, and ever since Finland made it apparent that rule-of-law would be one of the main focuses  in this capacity and that they wish to tie the payment of EU funds to certain standards in that regard, the country has been a frequent target of attacks from Fidesz's prominent politicians including Orbán himself in a recent speech, and also from the government's propaganda media where ridiculing Finland became something of a daily occurrence. But this time, Viktor Orbán tried to hit a more peaceful tone at the press conference following the bilateral talks between the two prime ministers.

Orbán: We have to focus on what we agree, not on the conflicts

After welcoming the journalists "suffering from sleep disorder" and thanking Finnish Prime Minister Antti Rinne for his flexibility in making the meeting and the joint press conference possible at such a late hour (around 9:15 PM, as Viktor Orbán attended the funeral of Jacques Chirac and Antti Rinne had an earlier meeting with Czech PM Andrej Babiš), Hungarian Prime Minister Viktor Orbán summarised the bilateral relations of Finland and Hungary:

"Everything is in place for the economic relationship [between Finland and Hungary] to be as good as the cultural and political relationships, because those are good."

Orbán said they will look for ways to improve the volume and the quality of trade and economic cooperation between the two countries, as currently, those are not satisfactory.

Orbán noted that Finland and Hungary have similar views concerning the future of their energy supply: Nuclear power and renewables are the way to go, but the climate goals are impossible to meet without nuclear energy. Orbán said that Hungary is committed to making 90% of its energy production carbon-free by 2030, there is a yearly plan which Hungary can execute. Orbán added:

"The ambitions of the Finns are greater, and we also like to set goals that are ambitious, but only after we carried out our plans and we have where to step next." 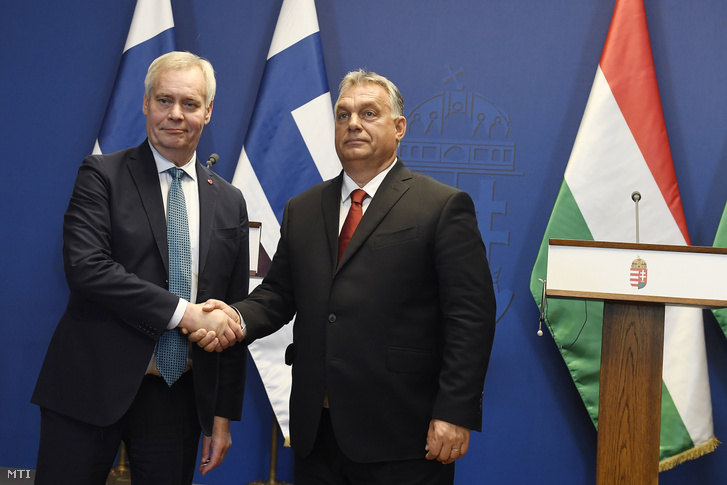 For Hungary, rule-of-law is a question of honour

Concerning European issues, Orbán did not say much at first, he stressed that instead of the conflicts, the EU institutions that are currently being established should focus more on the points of agreement. Later though, answering journalists' questions, Orbán could not avoid talking about the plan to tie EU funds to rule-of-law requirements.

Orbán noted that there are already mechanisms in place for the Commission to withhold funds from those who seem to mismanage EU funds, therefore there is already a link between the EU budget and a country's lawful operation, and as Orbán put it,

"The [Finnish] Prime Minister talks about having more, and in principle, I am not against reinventing the wheel, however a proposal is needed that appropriately answers the factual and legal questions because the current one is not a proposal but a political slogan. Hungary is willing to consider polished proposals."

Orbán then stressed once again that the EU's funds are already tied to certain prerequisites. Regarding the question addressed to PM Rinne about how it is possible then that Orbán's son in law secured EU funds for himself, the Hungarian PM was obliged to answer:

"what you're saying is fake news."

In a way, he is right, as the invoices for the suspicious streetlight projects completed by a company tied to the PM's son-in-law István Tiborcz were never submitted to the Commission, so the funds in question eventually originated from the Hungarian taxpayers as the projects were prefinanced by Hungary and the EU funds were never drawn down. However, beforehand, the EU's anti-fraud agency OLAF found evidence of fraud and organised crime in several cases, but Hungarian authorities ended up dropping the investigation altogether. We have explained the complicated case in a video that you can find in the following article:

Rinne added that if there are well-working control mechanisms with regards to the use of EU funds, and somebody misuses them, there will have to be sanctions.

Orbán also made his position clear on the current rule-of-law inquiries against Hungary. He said that Hungary was not as lucky after World War II as Finland since the country was occupied by Soviet forces after the war and lived through forty years of dictatorship, therefore:

"It's not so obvious in Finland as it is in Hungary that the rule of law is not a legal question but a question of honour. When we are questioned about that, it is an insult to our honour, and you should really consider this: international relations are not based on countries insulting other countries, they are based on mutual respect, we do not judge without facts or evidence."

The Hungarian Prime Minister added that it is difficult to compare rule-of-law in different countries due to historical and legal differences, there are institutions in Hungary that are not present in Finland, but that does not make Finland a weaker democracy, and he does not want the EU to become a place where "the leader of an EU member state visits another one to give them an earful about rule-of-law, because then there will be many things, but not unity." Following the questions, Orbán concluded the press conference by doubling down on his moral argument:

"In Central Europe, democracy, freedom of the press, constitutionality, these are not political games. Starting Article 7 procedures based on political motives... Here, this is a matter of honour. We take it seriously, and we want others to take it seriously as well and not use it as a political weapon against Hungary, but if it is necessary, we will fight."

Rinne: Rule-of-law must be protected with "a well-balanced and legally unambiguous mechanism"

Finnish Prime Minister Antti Rinne said it's easy to agree with Orbán's assessment of the commonalities of Finland and Hungary, including trade, tourism, and noted that a better Europe must be built in cooperation with its institutions. He thanked PM Orbán for the good-natured bilateral talks, and recalled the long history of the two countries and their multi-faceted cooperation, welcoming Hungary's intention to join the Helsinki-based European Centre of Excellence for Countering Hybrid Threats. 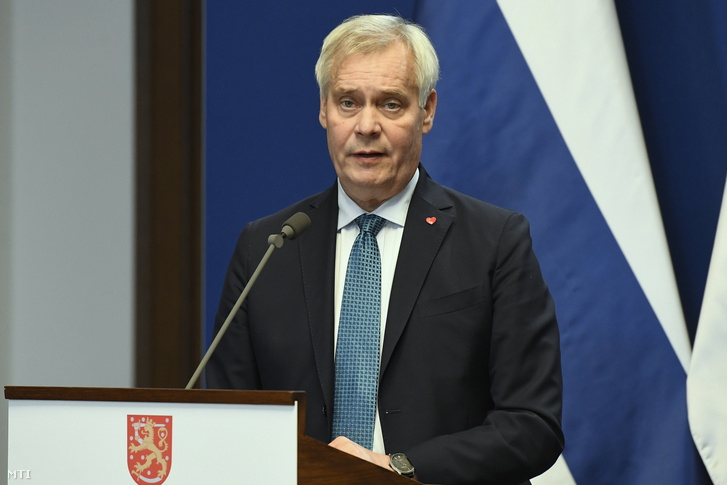 Rinne said that the Finnish EU presidency was a separate item on the agenda of his meeting with Orbán, and expressed his hope that the European Council's October summit will be able to bring the positions of member states closer on crucial topics such as the EU's total budget, the share of financing between certain programs, and the conditions of using EU funds. He welcomed that there is convergence amongst member states on the idea that the efforts against climate change, the response to immigration, and the state of rule-of-law should be taken into account with regards to financing, stressing the latter once more:

"Today, I have emphasised to Prime Minister Viktor Orbán that in order to protect the European Union's budget and to ensure the proper use of funds, a new, well-balanced and legally unambiguous mechanism has to be created that sets compliance with rule-of-law principles as the condition for receiving EU funds."

Rinne mentioned that they also discussed the EU's enlargement with Orbán, stating that it is important that the EU provides a convincing membership perspective for the Western Balkans, provided that their reforms progress in the necessary pace. The Finnish Prime Minister added that the rule of law remains one of the primary questions during the enlargement process as well.

The two leaders also talked about the EU's planned goal to achieve carbon-neutrality by 2050 - an initiative that was blocked by four countries including Hungary, as we reported in June. Rinne said that he hopes that they can reach an agreement on this topic during the Finnish presidency, as "in this, all of the countries can find their own path." They also discussed Brexit, Rinne said that the unity of the EU27 is strong, and said:

"Let's hope that the UK will leave the EU with a deal, but there is not much time left to negotiate the possible alternatives to the existing deal, which is why we are urging the United Kingdom to make their proposals."

A reporter from the Hungarian state media asked Rinne what his official opinion is about his Minister of Interior Affairs attending a meeting in Malta where "some countries agreed on the obligatory migrant settlement quotas." Rinne clarified that the voluntary deal made at the meeting in Malta is a temporary agreement between a handful of EU countries to solve the relocation of asylum seekers arriving through the Mediterranean route, and Finland attended the meeting to follow developments in their capacity as the President of the EU Council, and added that if there will be twenty countries taking part in this temporary solution, Finland will also join.

Rinne did not only meet Orbán

The Finnish Prime Minister also had talks with two members of the Hungarian opposition: Gergely Karácsony, the opposition's joint candidate for mayor of Budapest, and Klára Dobrev, an MEP of Demokratikus Koalíció (DK) and wife of the party's founder, former PM Ferenc Gyurcsány.

In a video uploaded to Facebook after the meeting, Dobrev said that the Finnish PM came to Hungary to personally learn about how the illiberal democracy is being established in Hungary, adding:

She also told Rinne that DK wants municipalities, NGO-s, associations, and scientific institutions to be able to directly apply for EU tenders, as that way it would be the EU making decisions about the funds instead of "Orbán's corrupt government." 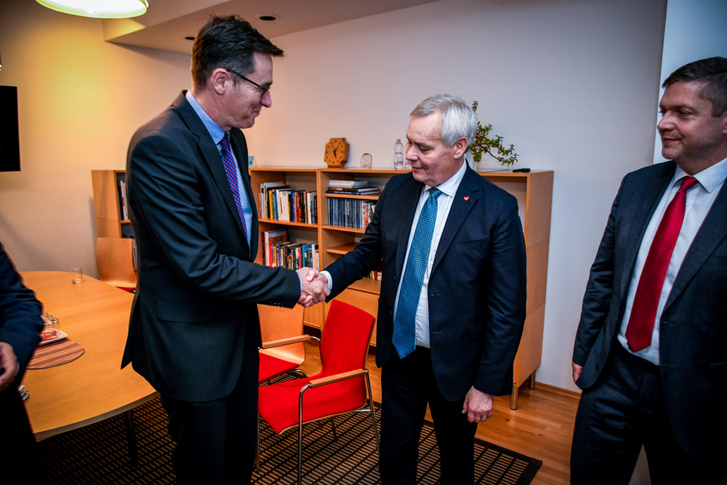 Gergely Karácsony told Index after the meeting that the Finnish Prime Minister was rather up-to-date on Hungarian domestic politics. Karácsony informed Rinne about the situation of the Hungarian media landscape and said that the European Union made two mistakes: first, there are no sanctions for abusing the goodwill of the EU, and secondly, it allows governments to interpret sanctions against government policies as sanctions against their countries, and taking away funds would give plenty of opportunities for that. To counter that, the opposition's candidate for Lord Mayor of Budapest suggested the EU make it possible to expand the funds for which municipalities can directly apply in cases where there are infringement procedures against their respective governments.