Szűcs Ágnes
Világi Máté
2019.10.02. 20:00
Frissebb (1)
There is no doubt that Olivér Várhelyi’s professional experience makes him a great candidate for the European Commission, but nobody envies his future colleagues in Brussels. What do we know about the new Hungarian nominee?

"The European Parliament cannot really pick at Olivér Várhelyi: he is a well-prepared professional with an outstanding intellect, who could not have any financial conflict of interests. What kind of person he is, that is a different question” – a source with an insight into the work of EU institutions and Hungarian diplomacy in Brussels told Index.

On Monday night, after the European Parliament's Legal Affairs Committee (JURI) deemed László Trócsányi to be unfit for the role, Prime Minister Viktor Orbán announced that he is nominating Várhelyi, Hungary's permanent representative to the European Union, for the European Commission (EC).

I cannot allow the European Parliament or anybody to cherrypick Hungarian politicians instead of the Hungarian people, so I have told the President that under these conditions, I'm nominating a technocrat

– said Orbán during the press conference with the Finnish PM. It is true that member states usually nominate politicians, former heads of governments or MEPs for the Commission.

However, Várhelyi's career in EU diplomacy is not entirely unique; Luxembourg's nominee, Nicolas Schmit was a permanent representative to the EU between 1998 and 2004, but he has been a member of the government for 15 years, and he is an MEP since the 2019 elections. So far no one else among the new nominees is a career-diplomat.

Ursula von der Leyen, the president-elect of the Commission and Várhelyi met on Tuesday. This was the first, so-called formal interview which all other candidates already went through, it's the first time the nominee and the president-elect discuss the prospective commissioner's intended portfolio. The staff of Von der Leyen, however, releases no further information about these meetings. Her spokesperson reminded Index that “not every interviewee becomes a commissioner automatically,” although they did not elaborate on this. Indeed, Von der Leyen does have to approve a nominee in order for them to become a commissioner – or, in other words, she can also say no.

If Von der Leyen accepts Várhelyi and the new Romanian nominee – whom the Romanian PM Viorica Dăncilăis is yet to name – the circle begins anew: the candidates have to pass the JURI's ethics investigation, and then a professional hearing. After all this, not earlier than two weeks, the MEPs vote on the whole Commission.

But there was some defiance in Orbán's voice: he hinted at Von der Leyen having to learn to live with the technocrat. During his presidency, Jean-Claude Juncker aimed to make the Commission an important political institution to balance national governments. Governmental experience, therefore, could prove to be useful for a candidate as a politician could bring their support and legitimacy from home, like Commissioner Günther Oettinger, who is responsible for the EU's budget, or his colleague with the energy- and climate policy portfolio, Miguel Arias Cañete, both of whom were popular politicians in Germany and Spain respectively.

A politician has experience in making decisions quickly, even if there isn't an optimal solution for everyone.

While a technocrat executes a decision that has already been made.

Contexte, a French EU and foreign policy newspaper wrote that Várhelyi is a careerist with no political profile who usually sides with the more radical PM Orbán. 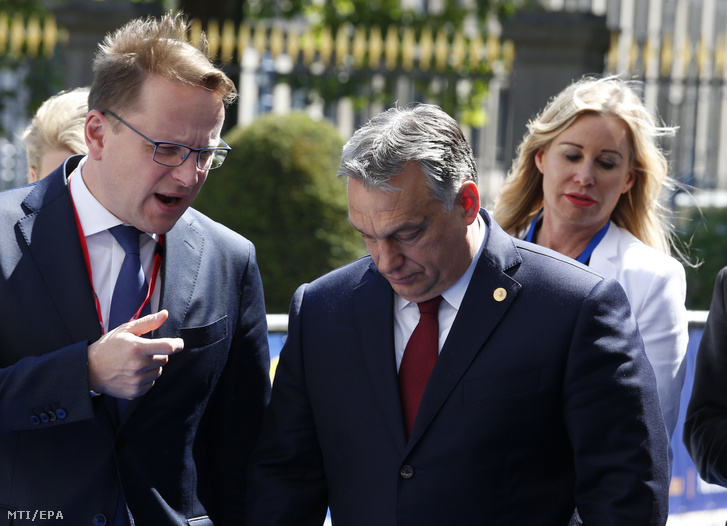 Várhelyi's nomination for the Commission is symbolic: the metaphorical and literal ambassador of Orbán's EU politics could be in charge of enlargement and relations with the EU's neighbours for five years. Instead of Trócsányi, Orbán has chosen a candidate whose competence is beyond doubt, and against whom the JURI investigation will probably find nothing.

But he is also widely known to execute Orbán's orders to the letter, no matter what. This is a slap in the face for EU institutions seeking to become more autonomous political actors, including the EP that rejected Trócsányi and Juncker's idea of a political commission.

The style is the man himself

Várhelyi has been a government official during his whole career who mostly remained obscure to the Hungarian public. According to his CV available on the Permanent Representation's website, he studied law in his hometown Szeged and in Aalborg, Denmark. He started working at the Ministry of Industry and Trade in 1995, from where he transferred to the Ministry of Foreign Affairs. “He is a member of that foreign policy boy's club that emerged in the 90s and who really know what they are doing, but who are macho go-getters to no end” – said our source.

Várhegyi started working at the Representation in 2001. At first, he worked as a legal counsellor, and two years later, he was appointed the head of the Legal Service. In 2006, he became the Head of the European Union Law Department at the Ministry of Justice, from where he went on to the Commission's Directorate General of Internal Market and Services as the Head of Unit responsible for Industrial Property Rights in 2008.

The contracts of those Commission officials who have temporary, or contractors' status are fixed-term employees, but after a successful competitive exam, the possibility of the indefinite term opens up. The fact that Várhelyi got such a position with a contract for indefinite term speaks volumes about his abilities and expertise in European property rights law. This is incredibly rare, usually, officials are only nominated for positions like this after working at the Commission for years after passing the exam. 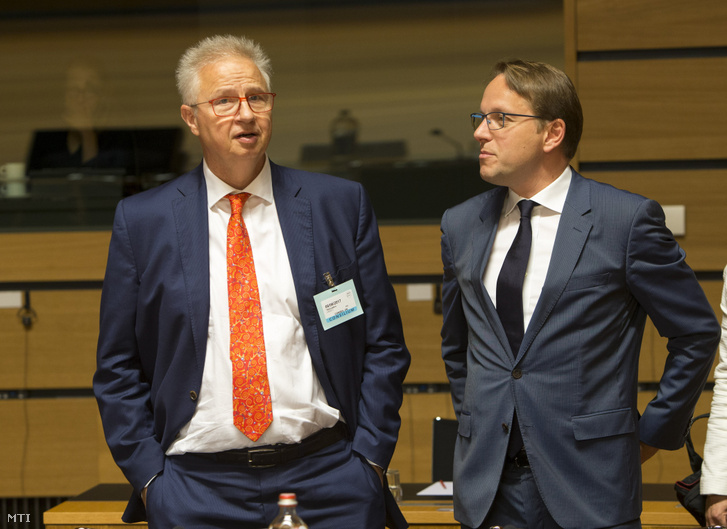 On this picture, made available by the European Council, are Minister of Justice László Trócsányi and Olivér Várhelyi Permanent Representative at the Justice and Home Affairs Council's meeting in Luxemburg, 8th June 2017.
Fotó: Enzo Zucchi / MTI

However, according to our sources, Várhelyi later attempted the competitive exam, but he failed. In his defence, many other excellent professionals have also failed the exam that is very different from the ones Várhelyi might have gotten used to in Hungary.

He returned to the Representation from the Commission in 2011.

"Várhelyi has very strong skills and abilities, but his ambition is bigger. If something does not go his way, he immediately pushes the responsibility onto his subordinates, and screams vulgarities at them."

– our source divulged. Another source said that not everybody working at the Representation appreciated Várhelyi's cynical humour.

According to 444.hu's profile from 2015, “Várhelyi shoots for total victory, instead of compromises. He is quick to be angry during discussions, and sometimes even pounds on the table.” By then, correspondents in Brussels have already heard from diplomats that not many could tolerate Várhelyi's crude style during COREPER I-meetings.

He became the head of the Permanent Representation in 2015, when Hungarian foreign policy took a belligerent turn, which was complemented by Várhelyi's appointment. According to hvg.hu, “contrary to his predecessor Péter Györkös, who usually tried to soothe critics of the Hungarian government, Várhelyi represents a more aggressive negotiation style.”

According to Politico,  it was not easy for other ambassadors to get along with him. While French paper Contexte assessed that “he always makes his voice heard,” our sources say his style often prompted revulsion, which made it harder for him to represent Hungary's interests even when he was in the right. The rules are different at the elite club of diplomats.

His attitude is probably the reason why he did not get to be the head of the EU Intellectual Property Office, even though professionally, he is a perfect candidate. In the summer of 2018, his outburst at a panel discussion caused significant outrage among Brussels-based correspondents.

His colleagues will not have an easy time at the European Commission, but his hands will be tied by the checks and balances of the EU, as well as by its system built around co-operation. He will also have to take an oath, swearing not to be biased towards the interests of his respective national government. That being said, his nomination is still a strong statement fitting well into the Hungarian government's freedom-fighting narrative from the past eight years.