Let’s see who the mayor is sleeping with! Dull Szabolcs
Translation: Máté Világi
2019.10.04. 16:29
Frissebb (2)
Tamás Wittinghoff, the mayor of Budaörs is being blackmailed with a sex tape; Újbuda’s opposition candidate Imre László is accused of indecent exposure and sexual harassment; Gergely Karácsony’s municipal clerk is also under fire, because (allegedly) as a teacher at university he made sexual advances towards one of his students. As of the past few days, it seems like the sexual life of politicians is no longer off-limits. The opposition is deliberating, and Fidesz is deeply silent about the topic.

Until recently, the sex life of politicians was a strict taboo; there seemed to be a unsaid agreement between the political factions. Of course, there have always been rumours circulating about the private life of ministers, MPs, or politicians, but for the public, it was always off limits. It was only broken by the rare coming-out from a few politicians.

The situation has changed.

Sex only appeared as a weapon in the political arsenal in traces during the 2018 general election, but it is being frequently used during the 2019 municipal elections. It did not stop at accusations of sexual harassment: for the first time ever in Hungarian politics, the sex tape of an incumbent mayor has leaked. Sure, there was the pre-internet scandal when movie rentals stocked the sex tape of Füzesabony's Christian Democrat (KDNP) mayor, but that was different because he was the one recording the act.

But just over the course of the past few weeks, a number of stories on the sex lives of politicians were published:

During last year's election campaign, it became apparent that the private lives of politicians will no longer be holy cows avoided by campaign directors like the plague. In 2016, Ripost wrote about János Volner, the former whip of Jobbik, who was photographed with a woman (the paper alluded that he was cheating on his wife).

Later in the campaign, the since-deceased transvestite performer Terry Black accused Gábor Vona, the president of Jobbik with having homosexual affairs. Vona denied the claims and won the subsequent lawsuit.

A similarity between these cases is that they all involve the private lives of opposition politicians. Moreover, apart from the case of Wittinghoff, we cannot even be sure if a sexual act has taken place. Another similarity is that all of these cases were spread by pro-government papers and channels, while Fidesz, as a party, kept silent about them. Officially, at least, none of their politicians reacted to any of these stories.

According to our sources, this is exactly what confuses the opposition. They cannot gauge yet whether or not they should talk about these cases, as by responding to them after the allegations were denied, it would be the opposition parties who elevate them into the political discourse. In the case of Imre László, however, the opposition organised a protest where even Karácsony showed his support by personally appearing at the TV2 headquarters and handing a petition over containing their official objection and denial.

Many other well-known figures of the opposition were also present at the protest, and Imre László, the politician involved in the scandal, tried to explain the attacks by saying: “The polls show that Fidesz is losing in the capital's biggest district.”

He also added that he was also deeply disappointed in the character of his opponent, Fidesz's Tamás Hoffmann. Imre said that it doesn't matter if the smear campaign was personally ordered by Hoffman or he was just aware of it, “my respect for him has evaporated.” The politician added that while his opponents are trying to fight him with lies, slander, and malice, he will fight with honour. 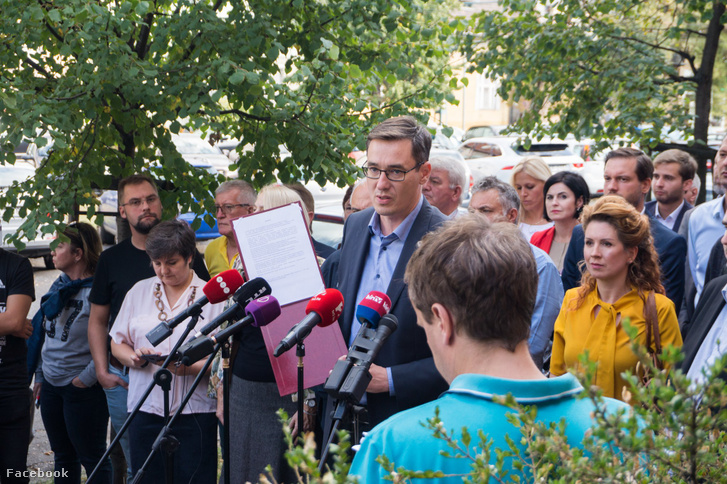 Fidesz, the party which systematically issues a response to almost every single communiqué of the opposition, remained silent this time. Even Fidesz's Tamás Hoffmann, Imre László's opponent left the protest's personal attacks without comment (there was no statement or even a Facebook post), and similarly, there was nothing about Wittinghoff's abovementioned sex tape on the Fidesz-Budaörs Facebook page either.

According to our information, members of Fidesz anticipate that the candidates' scandals would weaken the opposition. However, according to our source in Fidesz, the party has to be careful to avoid the appearance of leaking these stories for political gains, which makes it unlikely that a politician of Fidesz would openly accuse their opponent of sexual harassment during the campaign.

The biggest question, of course, is how these cases will influence the voters, how much damage will these stories cause to the politicians involved: can Tamás Wittinghoff get reelected? Will Imre László win? The answers will determine if sex tapes and sexual harassment allegations will play a major part in future political campaigns and if Fidesz's politicians will also have their private lives aired out in public.

(Cover and header illustration: szarvas / Index. Headlines clockwise, from 12 o'clock: A female student claims she was sexually harassed by Momentum MEP; Mayor of Budaörs is under attack as hidden camera sex tape leaks; A socialist pastor, the father of Momentum's Anna Donáth might have sexually harassed an employee; "He asked me to stroke his member" – Újbuda's opposition candidate sexually harassed a female doctor)