What is behind the sex tape scandal of Győr's mayor? So far, it remains a mystery who's actually pulling the strings behind the sex tape scandal of Fidesz's mayor of Győr, Zsolt Borkai - there could be political, business, or private motives behind the leaking of the extraordinary video footage. Besides Borkai, his long-time friend, attorney Rákosfalvy Zoltán could also have been the target, the lawyer often called "Bübü" made a name for himself during the era of Borkai's leadership in Győr, but gained a number of enemies on his way to the top.

"In sports, it's unfair to land a big punch right after another one..."

That is the philosophy of the mayor of Győr, Zsolt Borkai, as he said to local paper Kisalföld commenting on rumours about Fidesz running somebody else for mayor in 2019. Many thought that the mayor who lost his position at the helm of the Hungarian Olympic Committee in 2017 has also become weaker politically and fell out of favour with Prime Minister Viktor Orbán. But that was not to be the case. Mid-summer, Fidesz had announced that they are nominating Borkai as their candidate for mayor of Győr once again. He was a popular candidate and Győr an example city which improves nicely and spends hundreds of millions of Forints on developments.

Even if in sports it is unfair to land one big punch right after another, that is not necessarily the case in politics, business, or in private life, and it is so far unclear which of these motives drove the anonymous poster of the recently started blog targeting Borkai and his confidante, the lawyer and businessman Zoltán Rákosfalvy. Is this a political attack, a dispute about money, or are there private reasons? Despite the video footage published on the blog looking real, it is not at all sure that the accusations of economic crimes made by the unknown blogger calling himself the "Devil's advocate" have such strong evidence backing them up.

Of course, the video gave Győr's business circles plenty to talk about as well, where not only Borkai, but the other participant of the orgy, Zoltán Rákosfalvy (to his friends: "Bübü") is also a well-known figure. Bübü and Borkai reached the climax of their careers together, even if that phrase now has a new interpretation in light of recently published video footage. A little more than a decade ago Rákosfalvy was far from being the rich and successful businessman he became during Borkai's tenure as mayor. But Borkai also has a lot to thank to Bübü, who often boasted amongst his friends that he was Borkai's mentor.

As an acquaintance of his told Index: Borkai ended up with the power, but the brains of the operation had always been Bübü, so the duo gained significant influence in Győr. Of course, in the beginning, besides the power and the brains, someone with money was also necessary on the team, and this role befell one of Rákosfalvy's business partners, János Somogyi, who had already been considered as one of the billionaires of the county way back when Borkai and Rákosfalvy were still really low in the ranks.

While people who know Rákosfalvy describe him as a smart, thrifty individual, Borkai is often painted as the polar opposite: The former successful athlete had a tough time getting a foothold in the business world despite trying hard. Later, Borkai worked as a P.E. teacher and even became a school principal at the end of the nineties until 2006. Also in the nineties, Borkai tried to become an MP, running as a member of the party MDF (Hungarian Democratic Forum) but he did not succeed. The twist came in 2006 when he was elected as mayor of Győr with support from Fidesz and KDNP, and he remained the leader of the city ever since. In 2010, he was appointed as the general secretary of the Hungarian Olympic Committee (MOB). Back then, he said being a mayor is his job, therefore first on his list of priorities, and MOB only comes after that as voluntary work. This attitude could be felt on Borkai's career in MOB, many complained that it was next to impossible to reach him in his office and he did not carry out his duties well. 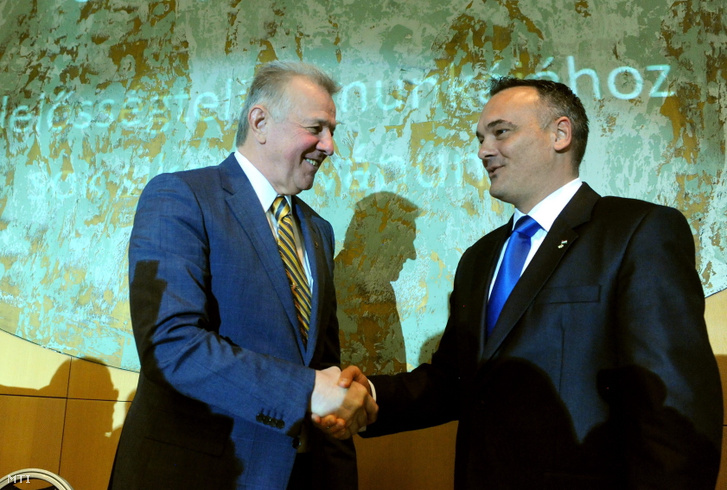 Pál Schmitt (l), then President of Hungary, congratulates Zsolt Borkai (r) for being elected as the president of the Hungarian Olympic Committee as the sole candidate.
Fotó: Koszticsák Szilárd / MTI

By becoming a mayor in 2006, Borkai opened a door for the up-and-coming lawyer Rákosfalvy. "He was a round little fat kid, we would have never dreamed about him becoming such a big man," people who have known Rákosfalvy for decades said about him. Years ago Rákosfalvy even worked as a lawyer for the Borkai-led municipality, but he used to have a contract with the parliamentary group of Fidesz too; Rákosfalvy gave legal advice to then-party whip János Lázár for more than 8 million Forints.

His first real business deal came only after the establishment of Orbán's second government in 2010, but it wouldn't have come to be without the background support of Borkai's municipality: he purchased cheap agricultural land near the Győr industrial park, which then were played over to an offshore company. But these companies offered clues leading to Rákosfalvy and his life partner, and in the meantime, the agricultural lands were rezoned as industrial areas, and they have sold them to carmaker Audi for a high price. Despite the fact that the press published all details about this deal, it had no consequences apart from making it apparent for the economic actors of Győr who are the new, untouchable kings of the local hill.

Of course Borkai and Rákosfalvy were not the only beneficiaries of Győr's model of the System of National Cooperation, as there were four or five other businessmen who accepted this new casting and could take part in the developments that make Borkai so proud. In the meantime, Rákosfalvy is soaring, even in sports: currently, he is a member of the Hungarian Swimming Federation's governing board and he is on the supervisory committee of the Győr athletics club.

But power and influence tends to have side effects: Even if the average man on the street did not care about who's profiting from the new system, those falling out of favour did not welcome this rearrangement of the town's power dynamics. The significance of that in the current scandal is that there are many disgruntled local businessmen who could be behind the blog providing an unusual insight into the private lives of Borkai and Rákosfalvy.

The duo's enemies and enviers have been for a while hoping that Borkai's position in Fidesz had weakened enough for him to be removed from the playing field. It is a fact that Borkai's status in MOB had dropped significantly after the Hungarian team's not-so-brilliant performance at the Rio Olympics in 2016.

Many complained about his leadership style saying that besides being the mayor of Győr, he has no time left for his tasks in MOB. This was when many in Fidesz, chief amongst whom is Lajos Kósa, moved to remove Borkai from MOB, even if Borkai tried everything. Before the election of MOB's new leadership, Viktor Orbán visited Győr as part of the government's Modern Cities Program, which the mayor could employ to show how the boss is still backing him. 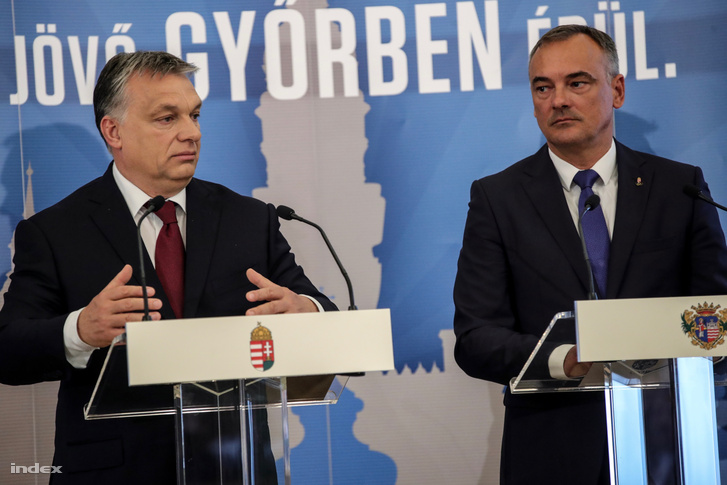 As it was not in the interest of Fidesz for anyone to have a direct go at Borkai, they have chilled those in the party who denounced Borkai's performance in sports politics, but the consequences could not wait much longer, Borkai lost his position in MOB in 2017. Some already drew the conclusion from this that Borkai fell out of favour and he will no longer be necessary as a mayor either. But Fidesz ended up nominating him once again as their mayoral candidate in Győr, and it really seems as if when Viktor Orbán was speaking about camaraderie at the last congress of Fidesz, he was referencing Borkai's case. And if that is what happened, than it seems that Fidesz's leadership was expecting the "Devil's advocate" to enter the scene.

As long as the blog does not go further than the sexual accusations and no direct evidence surfaces of crimes committed by Borkai such as consumption of hard drugs or hiding money on secret foreign bank accounts, then it is not at all sure that such a scandal could shake Borkai's position in Győr, as the city is otherwise doing quite well. During his visit to Győr, Orbán himself said that Győr is a model town and it operates well, although he did not forget to mention that 230 billion Forints of investments were made in Győr with the government's assistance.

Borkai had an extraordinarily smooth victory at the previous municipal elections in 2014: 61.02% of people voted for him, MSZP-Együtt's candidate gathered 13.63%, Jobbik got 10.77%, DK received 9.74% of the vote. This year, Botkai's strongest opponent is Tímea Glázer, supported by opposition parties DK, Momentum, MSZP, Jobbik, and LMP.

Cover: Mayor Zsolt Borkai's image projected onto the multimedia fountain located at the confluence of the Rába and the Moson-Danube. Photo: MTI / Csaba Krizsán

This article is the direct translation of the original published in Hungarian by Index.