On Wednesday, Hungary commemorated the country's 1956 revolution against Soviet occupation and communist rule. Prime Minister Viktor Orbán held an unusually short, reserved, and apolitical speech before a select crowd at the Hungarian Academy of Music, while opposition mayor of Budapest Gergely Karácsony spoke about the city's duty to guard the values of a fading republic.

Karácsony: Others will not create a republic for us

Gergely Karácsony, the new opposition mayor of Budapest who won the election just ten days ago and assumed his office last Thursday, held his first public speech on Wednesday at around 6:30 PM at the municipality's event commemorating the 1956 revolution held in the Budapest City Hall's parking lot that Karácsony plans to convert into a park.

The mayor began his speech commemorating not only the 1956 revolution but also the 30th anniversary of the proclamation of Hungary's third republic on 23 October 1989. Karácsony noted that the "Republic" has disappeared from the name of Hungary eight years ago, and the ideal of the republic had been disappearing from our life ever since. Karácsony stated that the restoration of the Hungarian republic already started at the municipal elections on 13 October, but there is still a lot of work to be done. Budapest cannot just think about itself, as it is the capital of the entire nation, Karácsony continued, Budapest has to be a community in which every Hungarian feels at home, even those who did not vote for change at the elections.

Karácsony said that 1956, 1989, and the recent municipal elections were all about becoming a community bound together by "love for our country and the love for freedom, these cannot stand against each other." He added that symbols cannot belong to a single political side, and that also stands for "the city hall, public media, or law and justice," these must belong to the community, as that is what having a republic means. 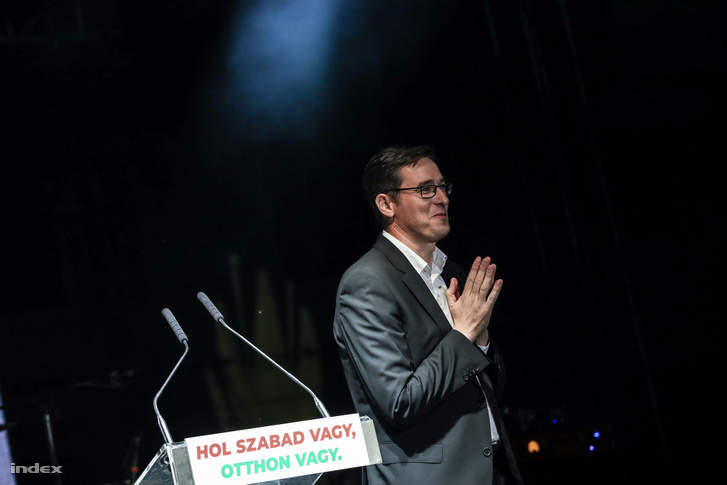 Karácsony set forth two goals for the new leadership of the capital: to make Budapest the most liveable and green city of the Central and Eastern European region and to make the city the keeper of the republic's idea. He added that Budapest and the countryside belong together, saying:

"We understand and accept our responsibility for our fellow citizens, as Budapest can and has to do more than other cities. The new leaders of this city must not talk about parables and examples, but lead by the examples of honesty, openness, tolerance, and humanity. Let's not allow ourselves to be divided and conquered. Many will try, but do not fall for the people who want to divide this country."

Karácsony said that the 1956 revolutionaries wanted a country in which the party does not constantly lie to them through channels paid for by the money of the people, and where the leaders work for the public good instead of enriching themselves, but then, these dreams were drowned in blood. These were the goals of 1989 as well, including the demand that "the ship of Hungary finally moors in the West." But as Karácsony explained, these dreams remained just as far as they  were, because "just when we think we're finally arriving, there is always a new twist."

Karácsony said that thinking that others would create the republic for us makes this dream vulnerable to those who only seek to look after their own interests, but people have to stand up for themselves and others, take the dream back from the privileged few, participate in public affairs, and take ownership over matters of their communities, cities, and their country:

"Let's take our fate into our own hands because that is what freedom is for."

Orbán: Europe and Hungary cannot persevere if they turn against themselves

A bit later, Hungarian Prime Minister Viktor Orbán commemorated the revolution at the Hungarian Academy of Music in Budapest with a speech held in front of a select crowd, breaking his tradition of speaking publicly at an outdoor stage on 23 October every year. State secretary Zoltán Kovács told state newswire MTI that this was because it was uncertain if the Prime Minister would be needed at an extraordinary European Council meeting due to developments around Brexit. The Prime Minister's speech was short, around ten minutes long, and unusually, it did not really reflect on current affairs directly.

Orbán explained that the Academy of Music is a fitting place of remembrance, as on the evening of 22 October 1956, virtuoso pianist György Cziffra, whose hands were broken by the Communists and the years spent breaking rocks in an internment camp, had played Bartók's Piano Concerto No. 2 at the same venue. After the artist finished his performance, the enthusiastic crowd exploded out onto the streets tearing off every sign of communism they could find. 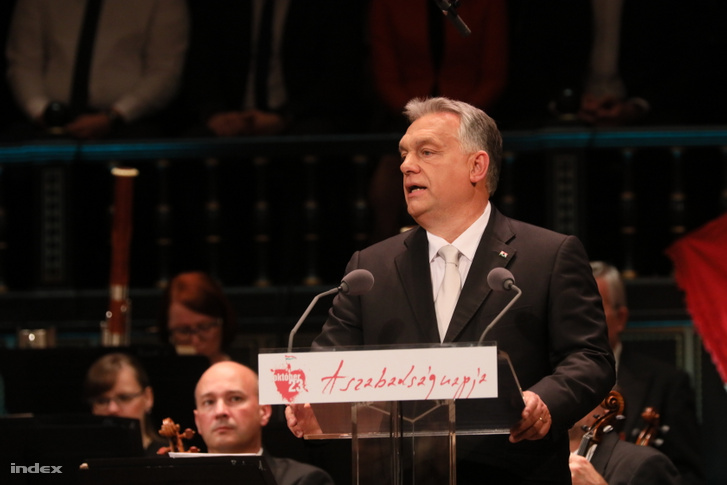 Orbán said that the thought of 1956 brings the youth of Budapest to mind who had risen up to change the fate of their country because they knew that "if the world of the Soviets persists, there will be nothing left of the Hungarian life, the red mud would engulf all that gives life meaning: faith, culture, family, and Hungarians realized that they do not have another homeland.

Orbán said that in 1956, the Hungarians added up and performed a miracle, soaring to unexpected heights, but that was not cheap, as they sacrificed their lives, their freedom, and many were forced into exile.

Orbán added that in 1956, Hungary wanted to freely decide how to live, and even then, Hungarians wanted a Hungarian, or in other words, European lifestyle:

"A free and independent Hungary in the Europe of Nations, and there was no contradiction in that, as back then, the Western half of Europe was actually still the shared home of free nations."

The Prime Minister said after this that Europe and Hungary cannot persevere if they turn against themselves, what they stood for, and the trinity of freedom, independence, and Christian brotherhood that made Europe the most successful continent in history. He concluded by saying Hungarians have to be thankful for the '56 revolutionaries because even if in secret, but Hungarians could raise their heads up high during communism, because their legacy is patriotism and the greatness of heroism, and because throughout their thousand years of history, they learned to look upon the everlasting values of God, family, and the homeland.

The holiday was mostly peaceful

This year's 23 October went down without major atrocities, apart from two minor incidents. During Orbán's speech, members of the Democratic Coalition (DK) protested outside the Academy of Music when notorious pro-government troll and writer of propaganda blog Vadhajtások.hu Zsolt Bede stepped up to DK member Ágnes Domonkos, took her sign and hit her in the chest. Bede walked away, and Domonkos was taken from the scene in an ambulance for examination. According to DK's statement made on Thursday, the party will be pressing charges.

The other incident was at community center Auróra in the VIII. district where a far-right fringe group called "Hungária Légió" attacked the Auróra's (closed) gates and burned the rainbow flag hanging on the building's facade. Later on, this group disturbed Jobbik's commemorative event and marched across the city in formation, chanting "Go home," "Let the fire burn and flame sparkle, come join us in the fight," and "We are at home here."

Other than that, the anniversary proceeded as it usually does, with political groups holding rallies where politicians spoke. Here are the highlights: