On Tuesday, the Budapest General Assembly held their first meeting since the municipal elections in October and accepted the 15-element package proposed by the new mayor of Budapest, Gergely Karácsony. Besides staffing and payroll decisions, the Assembly voted about declaring a climate emergency in Budapest, stopping new constructions in the City Park, increasing transparency, and refusing to apply the Overtime Act.

A long line of representatives, journalists, and activists were standing in line for their entry cards outside the City Hall of Budapest in the drizzling rain on Tuesday morning before the inaugural meeting of the new General Assembly of Budapest. The composition of the body of representatives significantly changed after the municipal elections on 13 October, Hungary's ruling party Fidesz had lost their majority and Fidesz-backed mayor István Tarlós had lost his seat to his challenger Gergely Karácsony who was jointly nominated by the alliance of opposition parties.

The meeting started shortly after 11:00 AM with the speech of the mayor, who promised that he will lead Budapest by three principles: "Nobody can make decisions without the people of Budapest, nobody can take from the people of Budapest what is theirs, and nobody can rob the people of Budapest of their future." Karácsony added that the new leadership will not allow the diminishment of the city's autonomy, and they will fight for the competences taken away from the municipality in recent years. He stated that the parties of the opposition are no longer in opposition, as they have become the "majority of the republic," referencing the idea introduced in his speech on 23 October.

Karácsony stressed that Budapest is the capital of the entirety of the nation, including the left- and right-wing, men and women, cyclists and drivers, and he said that he will partner with anyone who wants to work for Budapest, and will be against anyone who takes steps against the people of the city. Karácsony stated he will take a stand by the quality of life, preferring trees over concrete, healthcare over stadiums.

The meeting started out with some technical difficulties, as the voting computer contained the wrong district population proportions, but it was soon fixed, and voting could commence. Before accepting the agenda, Zoltán Pokorni (Fidesz, XII. district mayor) suggested postponing the votes on committees and the supervisory boards of municipality firms, as he thought these decisions were not prepared well and would reflect political deals more than the composition of the Assembly. Karácsony responded that he insists on electing supervisory board members as the companies have to operate, but he would not mind postponing the vote on committee positions. The Assembly ended up voting against Pokorni's suggestion. 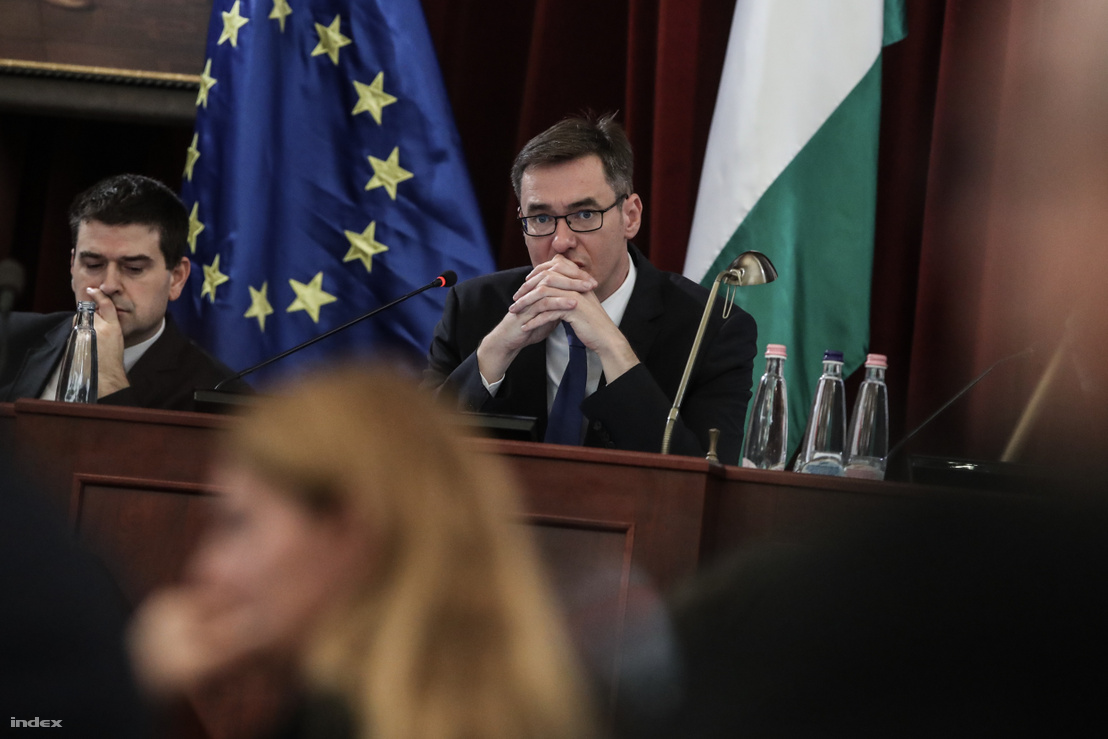 Mayor of Budapest Gergely Karácsony at the inaugural meeting of the Budapest General Assembly on 5 May 2019.
Fotó: Huszti István

Afterwards, the assembly elected the five deputy mayors Karácsony suggested, though Fidesz's Zsolt Láng Zsolt there is no need to pay so many people from taxpayer's money. The Assembly also decided about increasing the severance pay of former mayor István Tarlós with 70% of the vote.

The Assembly also elected committee members, though Pokorni reiterated his position and his party, Fidesz refused to delegate candidates to any committees as in their view, the distribution of committee seats does not reflect the distribution of seats in the Assembly. MSZP and DK ended up delegating candidates for the empty positions, and the Assembly elected the members, with these two parties gaining disproportionately large influence over committee work compared to the public support behind them.

Interestingly, the district mayor with the highest public support, Krisztina Baranyi of the IX. district ended up without a committee seat - opposition party Momentum had since offered to pass one of their positions over to her.

On behalf of Transparency International Hungary, Miklós Ligeti introduced the "This is the minimum" anti-corruption programme assembled by TI, Átlátszó.hu and K-Monitor anti-corruption organisations and adopted by Karácsony.

The proposal approved by the Assembly by a great margin means that from 1 January 2020, all municipal contracts (with no lower value limit) will be uploaded to the city's website instead of only the list of contracts as stipulated by the Freedom of Information Act. As opposed to the current practice of uploading difficult-to-use scanned files, these documents will be published in a searchable form, and public data will be made available in .xml format as well to facilitate their processing.

Miklós Ligeti of Transparency International introducing the "This is the minimum" program at the inaugural meeting of the Budapest General Assembly on 5 May 2019.
Fotó: Huszti István / Index

The city of Budapest will be more lenient towards requests for information of public interest as well; the Freedom of Information Act allows public organisations to bill working hours spent on completing such requests if it takes more than four hours, the adopted proposal increases that to 30.

City Park and the Roman Riverbank

The Assembly also decided about two controversial development projects in Budapest as well.

There had been a long debate between the former leadership of Budapest and locals about the mobile dam planned on the Roman Riverbank next to the Danube in the III. district, a popular recreation spot and the last remaining natural riverbank of the Danube's Budapest section. The Assembly now maintained the ban on modifications accepted in 2016 until the city prepares the new zoning plan for the area.

The other decision concerns the 'Liget Project,' the government's large-scale plan to create a museum district in Budapest's 200-year-old City Park (Városliget), which faced strong civilian objection ever since its conception and protesters were even present at the Assembly's meeting. 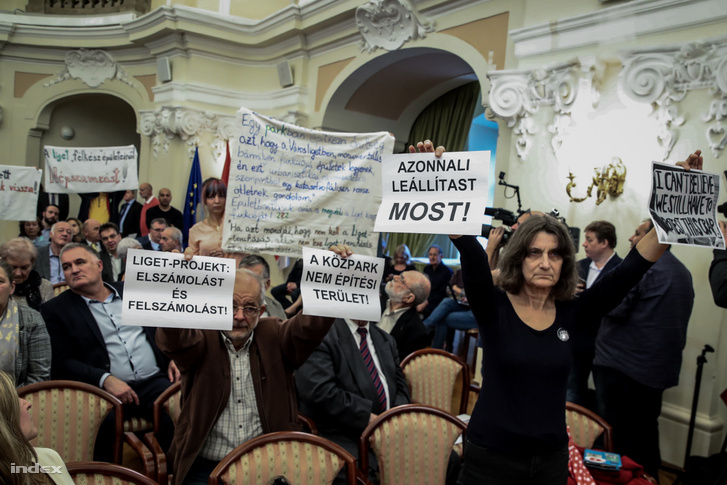 Protesters demanding the Assembly to put an immediate end to the Liget Project.
Fotó: Huszti István

"The City Park is not a construction lot, we do not want buildings there," Karácsony stated, saying that his proposal does not intend to put the government and the people of Budapest in an impossible situation, so it is only about the constructions that haven't yet substantially started, naming the New National Gallery specifically, which would have been erected in the middle of the park, next to the area commonly called the Great Meadow, but the wording of the proposal seems to cover the planned City Park Theatre and the House of Hungarian Innovation as well.

The Assembly now decided to renegotiate the project with the government and there is a good chance for these negotiations to be successful, as Prime Minister Viktor Orbán had already stated after the municipal elections that he would not go against the will of the people of Budapest and he is willing to let go of the project. Mayor Gergely Karácsony will be attending tomorrow's government meeting to discuss how to proceed. 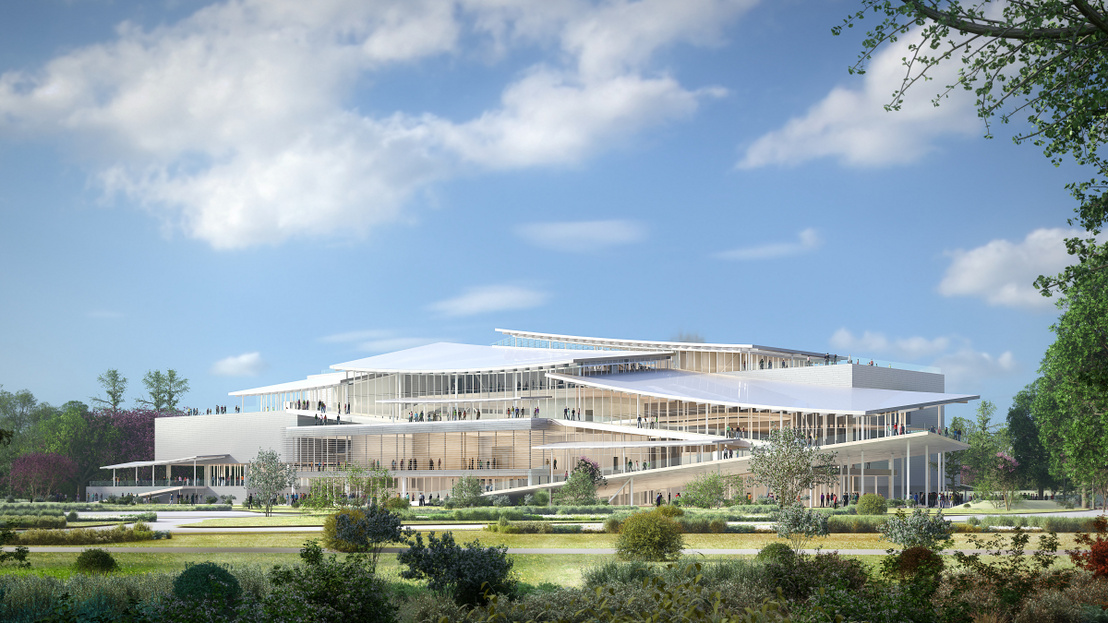 "Recognising that climate change presents a fundamental threat to people's welfare, a peaceful society, and the living conditions of future generations, the General Assembly assesses that there is a climate emergency," reads the proposal adopted by the Assembly without any votes against it.

The decision does not contain specific measures, it is more of a set of symbolic commitments: the Assembly vowed to take the environmental effects into account on any matter that directly or indirectly affects CO2 emissions, and also to prioritise the fight against climate change in the city's decisionmaking process, and to increase the transparency of information relating to the climate effects of municipal firms.

The Assembly also requested Karácsony to review Budapest's extreme weather contingency plan and the effects the Municipality of Budapest and its institutions and firms have on the climate. The decision also says that by the end of 2020, Karácsony should prepare a climate adaptation and mitigation action plan and a concept of making Budapest and its institutions and firms carbon-neutral.

During the proposal's debate, Zsolt Láng (Fidesz) said that even though climate change is a hot topic amongst the youth, it should be discussed in a more calm, objective manner, stating that it's false that the government is not doing anything, Hungary is doing way better in terms of emission quotes than a number of Western countries, adding that even though he wouldn't vote against the proposal, he does not understand what "emergency" means in this context. Krisztina Baranyi (Independent, IX. district mayor) said that extreme heat warnings have become more and more common in recent years, the Danube is overrun with faecal matter when it rains a lot, therefore it is time to declare a climate emergency. 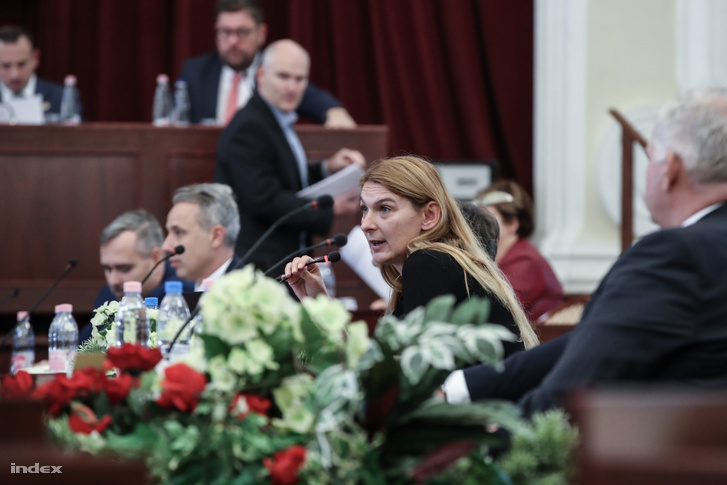 The Assembly has forbidden for the companies owned by the city of Budapest to apply the Overtime Act, the controversial amendment to the Labour Code passed by the Parliament last December. Opposition representatives said the law is inhumane and constitutes a health hazard, while Fidesz's representatives argued that the effects of this measure have not been examined and it could paralyse the operation of the city.

With regards to healthcare, the Assembly had a long debate about whose responsibility the dismal state of Hungarian healthcare is supposed to be, who ruined the hospitals when and how, however, the decision to begin negotiations with the government, the districts, and the city of Budapest about the further development of the Healthy Budapest Programme was passed unanimously.