Budapest descended into turmoil for hours as a result of road closures due to the visiting Turkish delegation's movements across the city and the thousands of demonstrators protesting Turkish President Recep Tayyip Erdoğan who was in town to meet Hungarian Prime Minister Viktor Orbán. Opposition parties condemned the Turkish President, the mayor of Budapest Gergely Karácsony commented that there is "no diplomatic goal that legitimizes Orbán currying favor with war criminals."

The main protest against Erdoğan's visit to Budapest started around 2:00 PM at Oktogon, the intersection of Budapest's Grand Boulevard and Andrássy Avenue. "We are here to protect the Kurds," Kaya Elif, the first speaker of the demonstration organized by left-wing civilians sternly stated. There were several hundred people present at the square, mostly university students and pensioners. "The Kurds are still oppressed in Turkey, and they stigmatize those who fight for their national independence by branding them as terrorists," Elif, a Kurdish woman living in Hungary continued, adding that those expressing solidarity with Rojava are also taking a stand by democratic and human rights, and the rights of women. Another speaker called protesters to "fight for Rojava here in Hungary as Rojava fights for us," and somebody else condemned not only Erdoğan but neoliberal capitalism as well. Protesters began marching towards the Danube on the Grand Boulevard with more and more people joining the demonstration, occupying the entire road, and by the time they reached the river, there were already two thousand people and chants of "Murderers" and "Get out, Erdoğan" could be heard. After crossing Margaret bridge, protesters were headed for Széll Kálmán Square, where they arrived at 5:00 PM, and protesters kept arriving.

There, a speaker called Orbán welcoming  Erdoğan an "act of inhumanity," as the Turkish President has blood on his hands, adding that Orbán's views are not the same as the views of the Hungarian people.

"Murdering children is not our national interest!"

Another speaker welcomed two Kurdish women onto the stage, saying that the women of Rojava are setting an example in bravery, responsibility, and being European, asking for first a minute of silence, and a minute of screaming in their memories. Then one of the Rojava women spoke in Kurdish - but the crowd understood the finishing comment, which was "Terrorist Erdoğan."

Afterward, Kaya Elif spoke in Hungarian once again, who criticized Orbán saying that it is shameful that the Hungarian Prime Minister is supporting genocide, but her people cannot be eradicated:

"When we will not be here anymore, our children will remind you of your crimes. We are not the terrorists, you are the terrorists!"

After 5:30, the protest had officially ended, but the organizers announced that Margaret Bridge is closed because that is the route Erdoğan's motorcade is going to take on their way to Gül Baba's tomb. Protesters could hardly leave the square due to police blockades, and most of them ended up walking towards the bridge.

Due to the closures in Buda, traffic broke down in Budapest - the city's most important tram lines were inoperational for most of the rush hour, and the subway did not stop at several stations either - screaming security guards were telling people to get back in the cars at the Batthyány square stop, as our colleague reported, and several other bus and tram lines were stopped for the time the Turkish delegation was moving around in the city, and even pedestrians were banned from the affected area - around 1500 people were stuck in a street near the Buda side of Margaret Bridge, our colleague reported. Protesters arrived near the route as well, but police forced them into Rómer Flóris street, to which they responded by chanting "You are Janissaries!"

Erdoğan's motorcade passed by protesters sometime after 6:00 PM first, then once again around 6:45 on their way back from Gül Baba's tomb:

After this, the road closures were lifted and protesters began marching across the bridge to Pest back towards Oktogon. Another protest was announced to begin at 6:00PM at the nearby Turkish embassy on Andrássy Avenue where protesters lit candles in remembrance of the Kurdish victims of the Turkish invasion in Syria, but the protest was not easy to access: Our colleague reported that a significant part of Andrássy Avenue was closed by police, and police stopped everyone who tried to enter. Around a hundred people ended up protesting in a nearby street with candles and pictures of murdered Kurdish politicians, but they could not move closer to the embassy due to police closures. Andrássy avenue was opened around 7:00 PM, and after that, protesters have mostly dispersed.

Karácsony: Orbán is currying favour with a war criminal 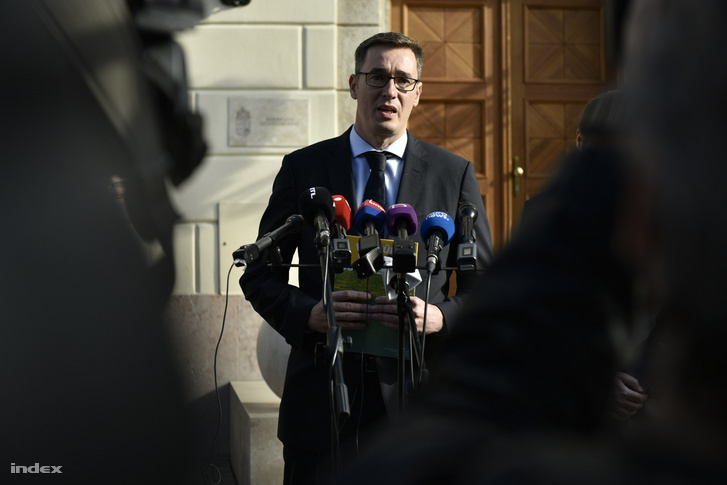 The recently elected opposition mayor of Budapest, Gergely Karácsony commented that the breakdown of traffic and the subway system being inoperational for hours just because of the visit of a foreign leader is unacceptable, saying that he requested leaders of the public transportation system to restore service immediately and to only coordinate with the police in similar situation once they have received permission from the mayor.

Regarding Erdoğan's visit, Karácsony stated "as I promised, my seat does not determine my stance: I am protesting the arrival of an oppressive dictator to Budapest even as a mayor. It is no coincidence that I hung a Kurdish flag in the window of my office a couple of days after my election, I felt it is my duty as a peace-loving mayor to take a stand by the Kurds." Karácsony added that it is sad that the Hungarian government does not feel that way, and would rather paralyze the capital for half a day, even though

"There is no diplomatic goal that would legitimize a Prime Minister currying favor with war criminals."

Parties of the Hungarian opposition were outraged over Erdoğan's visit as well, here are the highlights of their responses:

Fidesz issued a press release later on saying neither Hungary nor Europe cannot afford to not strive for a balanced relationship with Turkey, but "Ferenc Gyurcsány (former PM, chairman of DK) and the rest of the pro-migration forces would not be against a wave of migration that is bigger than ever before, as they want more and more immigrants in Europe, which is why they are protesting so loudly against Erdoğan's visit."

This article was based on Index's Hungarian coverage of the protest against Erdoğan.