Erdoğan in Budapest: Some of our allies negotiate with terrorists Turkish President Recep Tayyip Erdoğan visited Hungarian Prime Minister Viktor Orbán in Budapest on Thursday. After their joint press conference, the leaders attended roundtable talks with Hungarian and Turkish businessmen, while Budapest was mostly paralyzed by road closures due to movements of the Turkish delegation and the thousands of people protesting  Erdoğan's visit.

At their joint press conference, the two leaders were in agreement that Turkey's military operation in Northern Syria is only aimed at allowing refugees to return to Syria, and while there were mentions of the economic cooperation between the two countries mostly from Orbán's side including cooperation between the two countries regarding energy policies and increasing trade volumes (read more about these issues here), the Syrian situation, refugees in Turkey, migration, and the European Union were the primary topics that dominated most of Erdogan's statement and the journalists' questions.

After the Hungarian and Turkish delegations have signed several agreements, Hungarian Prime Minister Viktor Orbán was first to make a statement. 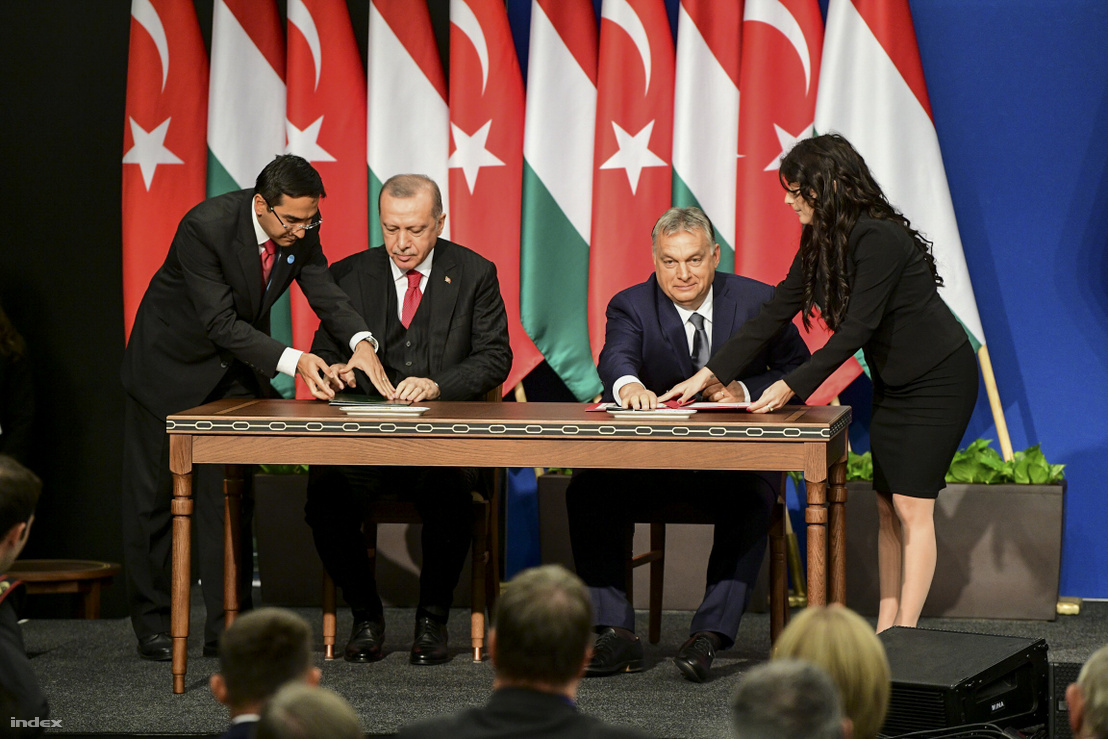 After welcoming the Turkish President, Hungarian Prime Minister Viktor Orbán said that their current meeting is a part of the yearly bilateral talks they have agreed upon in 2013, reiterating what he said after his meeting with Russian President Vladimir Putin exactly a week before, namely that Hungary is historically determined by the Istanbul-Moscow-Berlin triangle.

The baseline of Hungarian foreign policy is that without Turkey, it is impossible to stop the wave of migration towards the European Union, which is why Hungary is a strategic partner to Turkey, and this partnership had stopped 350 000 illegal immigrants just this year.

Orbán added that due to the two countries' NATO membership, they are military allies, and this "military and defense industry cooperation is progressing at a good pace." He divulged that based on previously signed agreements, Hungary and Turkey have joint projects in Africa including a medical mission to Kenya, and a new cooperation is in the making about helping Ghana improve their healthcare and access to water, and this is "something that has never been discussed before in the Hungarian public discourse."

Orbán said that during their talks, Erdoğan expressed his dissatisfaction with the low trade volume between the two countries, reminding that they first decided to increase trade volume to five, then six billion Euros. "The determination is great, our optimism is unbroken, but this goal seems to be just above the horizon, as the current trade volume is 3 billion dollars" Orbán added, telling journalists that a business forum is set to take place after the press conference where 15 business leaders will discuss with Erdoğan and Orbán how to proceed. Orbán also noted that Hungarian Eximbank had opened a $200 million credit line for furthering Turkish-Hungarian business cooperation.

Orbáns said that Turkey is also an important partner for Hungary's energy policy, as cooperation with them is essential in achieving energy independence. "Turkey has done its job, Bulgaria and Serbia are still working, and we will also do our part" so the pipeline taking natural gas from Turkey to Europe could be completed by the end of 2021, Orbán announced.

Concluding his statement, Orbán mentioned MOL's recent acquisition of a pipeline in Azerbaijan, calling it the "largest foreign investment a Hungarian company has ever made in history," and added that 150 Turkish students are currently studying and getting scholarships in Hungary, in fields where Turkey needs trained workforce. 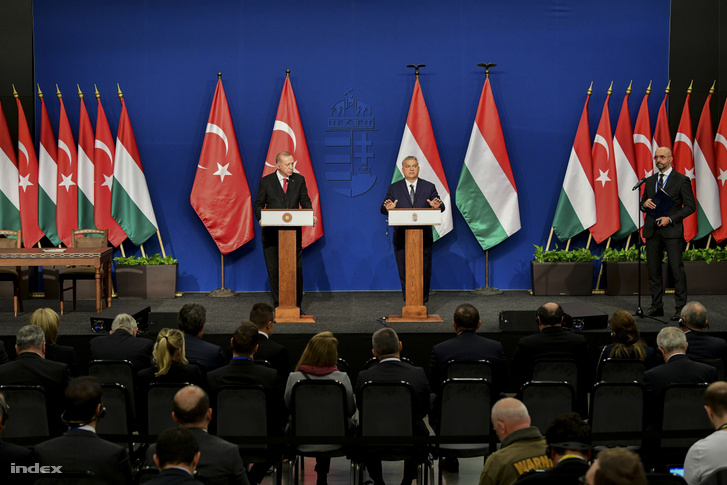 Erdoğan: Some of our allies negotiate with terrorists

"My dear friend," Turkish President Recep Tayyip Erdoğan addressed Viktor Orbán, thanking him for the invitation before expressing his hope that their negotiations will prove to be useful in the future, announcing the signing of ten international agreements on topics including strategic and security cooperation, education, culture, and transportation, noting they discussed important aspects of migration as well.

Erdoğan said that the 6 billion USD trade volume goal is realistically achievable, adding that the fifteen Turkish 15 businessmen at the roundtable talks after the press conference will also discuss the steps to be taken in Africa as well.

"Turkey can provide the Hungarian businessmen with everything they need, and we expect Hungary to assist our businessmen just the same."

-said Erdoğan, referencing the common roots of the two countries in culture and history, and adding that he would like to see "unprecedented cooperation" welcoming that the Turkish school will begin operation by 2020.

Erdoğan noted how Hungary has supported Turkey's EU accession and thanked Orbán for standing by Turkey when most EU member states treated the country negatively, commenting that the EU is damaging itself because a Turkish EU membership would be beneficial to Europe, emphasizing Turkey's good relations with the V4 countries. After this, Erdoğan specifically thanked Orbán for supporting Turkey's military operation in Northern Syria.

"There are 4 million refugees (...) in Turkey and a great portion of them would go on to Europe, but thanks to our cooperation, we have held them back patiently so far."

- said Erdoğan, stressing that the Syrian operation's goal is to create a safe zone to where refugees can return, saying that at the recent visit of the UN's Secretary-General they agreed on organizing a conference to raise money for these Turkish plans. Erdoğan welcomed Hungarian support for "our fight against terrorism" with its statement, adding that the two countries are NATO allies,

Erdoğan then listed Turkey's military successes against terrorists at length, stressing how "you cannot differentiate between terrorists, there are no good or bad terrorists" adding that Turkey has spent $40 billion on refugees and the country cannot handle a bigger burden.

"What did the EU promise?" Erdoğan posed the rhetorical question, answering quickly with "three plus three billion Euros, and we only received three billion so far. We only get promises, but people are fleeing to us from bombs, and we help them." Erdoğan once again stressed that Operation Spring Peace is about helping refugees, denouncing the USA and Russia for not "removing terrorists" from the region within the promised 120 and 150-hour timeframes, "therefore Kurdish militias are still there," claiming the Kurdish YPG "freed ISIS soldiers from prison." 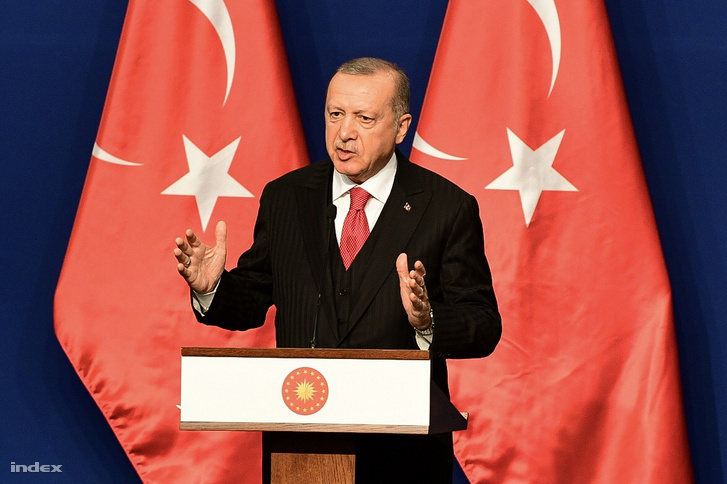 Concluding his speech, Erdoğan welcomed Hungary attending the Turkic Council as an observer and the Council's recently opened representation in Budapest, noting how Hungary is just a two-hour flight from Turkey, expressing his hope that they will meet with Orbán more often.

Similarly to the press conference of Orbán and Putin a week ago, only Hungarian state television M1, pro-government news site Origo and two Turkish media outlets were allowed to ask questions after the two leaders finished their statements.

Answering M1's question regarding the EU's financial support for Turkey in connection with the refugees currently in the country, Erdoğan said:

"Whether or not we receive support, we will still care for our guests, however, we cannot handle everything. If we see no other solution, we will open the gates, and I think it is obvious which direction they would go."

Orbán added with an awkward smile that for Hungary, the key question is indeed whether or not Turkey would open the gates, but "the best thing we can do right now is facilitating the refugees' return to their homeland," which is why his position is that aid needs to be taken to where there is trouble instead of bringing trouble here. Hungary is not a big country but it is willing to take proportional responsibility in rebuilding the towns, churches, and schools in the region.

"I do not like to flex my muscles," Orbán added, but "Hungary is more than capable of defending its borders" which are closed legally and physically, and the country possesses the "manpower and weapons" necessary for defending the borders from "illegal migrants."

Regarding his upcoming meeting with US President Donald Trump, Erdoğan told Turkish newspaper Sabah that the most important item on the agenda will be the fight against terrorism, repeating what he said earlier: there are no good or bad terrorists. He welcomed the killing of Abu Bakr al-Baghdadi, however, he said:

"killing leaders is not the end of the fight against terrorism: We will have to discuss our joint strategy because if that does not work, the terrorists who are fighting against us today could turn against others tomorrow."

Erdoğan added that Turkey could not purchase Patriot missiles, therefore, they bought the Russian S400 system, but if the USA offers Patriot missiles to Turkey for sale, they will consider the offer. He also noted that Turkish Airlines is one of the biggest airlines in the world, and they purchase their equipment from the US too, which cannot be forgotten.

In response to the recent announcement that Hungarian EU Commissioner-designate Olivér Várhelyi is in line for the enlargement portfolio, Orbán said that there are no thanks in that, as there are portfolios that are much easier to successfully manage, but he considers it as a sign of Hungary's commitment to the European Union.

As one of the newer member states, Orbán continued, Hungary will present appropriate arguments for the EU's enlargement to the older member states who seem to be in pain over the idea, and referring to France's recent veto on beginning ascension talks with North Macedonia and Albania and their comments on how the entire process of enlargement needs to be renegotiated, Orbán added that what is coming is going to be completely different than how the issue was handled before. Orbán expects the debates about where Europe's borders are, how far Schengen can extend, what to do with Turkey, and how the enlargement procedure needs to be reformed to take place over the coming year.

When asked about his dissenting opinion about the Turkish invasion in Northern Syria that differs from the European Union's common position, Orbán said the topic would deserve its own press conference, but said Hungarians have a "peculiar way of thinking." He elaborated that behind the good relationship with Turkey, there are fundamentally three types of considerations: there are philosophical and geopolitical reasons, and there are current affairs in which cooperation is necessary. Philosophically speaking, he regards Turkey to be not only a great country, but also a great historic nation, and he thinks great nations should respect each other, and the attitude Hungary has towards Turkey is the attitude of one historic nation has towards a much larger historic nation.

"if somebody in Hungary disrespects Turkey, my job is to apologize to Turkey or to compensate that somehow. we will not accept people mocking foreign dignitaries, mocking foreign countries, nations. In Hungary, that is unacceptable."

Repeating what he said in his statement now and a week ago at his joint press conference with Vladimir Putin, Orbán talked about how Hungary is geopolitically determined by the Ankara-Moscow-Berlin triangle, and said "Hungary cannot change its address," adding that Hungary's interest is to make Erdoğan interested in the success of the country, With regards to the current situation, Orbán said Hungary does not wish to have to stop hundreds of thousands of "illegal migrants" at its southern borders, and if Hungary does not help Turkey in creating a safe zone, that would be unavoidable. In summary, Orbán said he represents the Hungarian way of thinking, adding:

"We are members of the European Union, but we do not want to pick up their bad habits. Hungary treats its neighbours like this, and will continue to do so in the future, even if that is unfashionable in Western Europe, where they behave differently, they speak a different language, and think in a different way."

Erdoğan stressed that as his "dear friend" stated, the safe zone is a serious project aimed at returning refugees to Syria, which Turkey cannot do alone, and he has been meeting world leaders regularly in recent times to explain this, and he is ready to involve them in this project.