Speaking at the National Public Service University, in a heated explanation of how double standards on rule of law are employed against Hungary, Fidesz MEP József Szájer said that Spain holds political prisoners. Spain's ambassador to Hungary said the false claim made by the MEP is unacceptable, Szájer issued an apology on Thursday.

On Tuesday, MEP József Szájer was a guest speaker at the National Public Service University's series of events celebrating the 30th anniversary of the fall of communism, where other notable members of Fidesz, such as Speaker of Parliament László Kövér, had also appeared earlier.

Szájer: Do not lecture Hungary

Speaking about the early days of Fidesz at his lecture, Szájer talked about the concept of "the fiction of rule of law:" He said that even though they were fully aware that they lived under a system where such behaviour may be retaliated, they acted as if there was rule of law, as if rights that were said to be guaranteed were actually guaranteed.

One of the students attending Szájer's lecture asked what the MEP thinks about critics saying that Fidesz's governance created a similar fiction of rule of law in the country. Szájer said that such criticism is completely misleading: "The European institutions that lecture us on rule of law every single day are forgetting to apply the most basic principle of rule of law onto themselves, namely that it is the law that governs instead of the whims of certain people." To illustrate his point, the politician noted that Fidesz would never change voting rules in order to get the appropriate results, as he claims to have happened with the Sargentini-report initiating the Article 7 procedure against Hungary, "there are double standards." He then added:

"I'm not saying that what we have here in Hungary is a perfect world, there is no such thing anywhere. But I look at Denmark, Spain, where there are political prisoners, and all sorts of other countries who criticise Hungarian rule of law without grounds, because they have no factual basis to do so."

Szájer also said that even though what Fidesz does is "virtually the same thing they do in Germany or the Netherlands," there is a formula in the EU to debunk this argument: it is different when a state with a centuries-old democracy does the same thing. The MEP remarked that Hungary has many years of democracy under its belt, but there were centuries when Hungary was at the forefront of constitutional development:

"The country that first introduced the Golden Bull (edict of King Andrew II. limiting royal power) in 1222 should not accept lecturing from anyone else, especially not from the amateurish, ignorant, ideology-driven leaders of countries founded a couple of decades ago."

Even though he did not specify what he meant by "political prisoners", Szájer's words most likely referred to the controversial ruling of the Spanish supreme court sentencing nine Catalan separatist leaders to prison on charges of sedition in October, which sparked a series of protests in Catalonia. 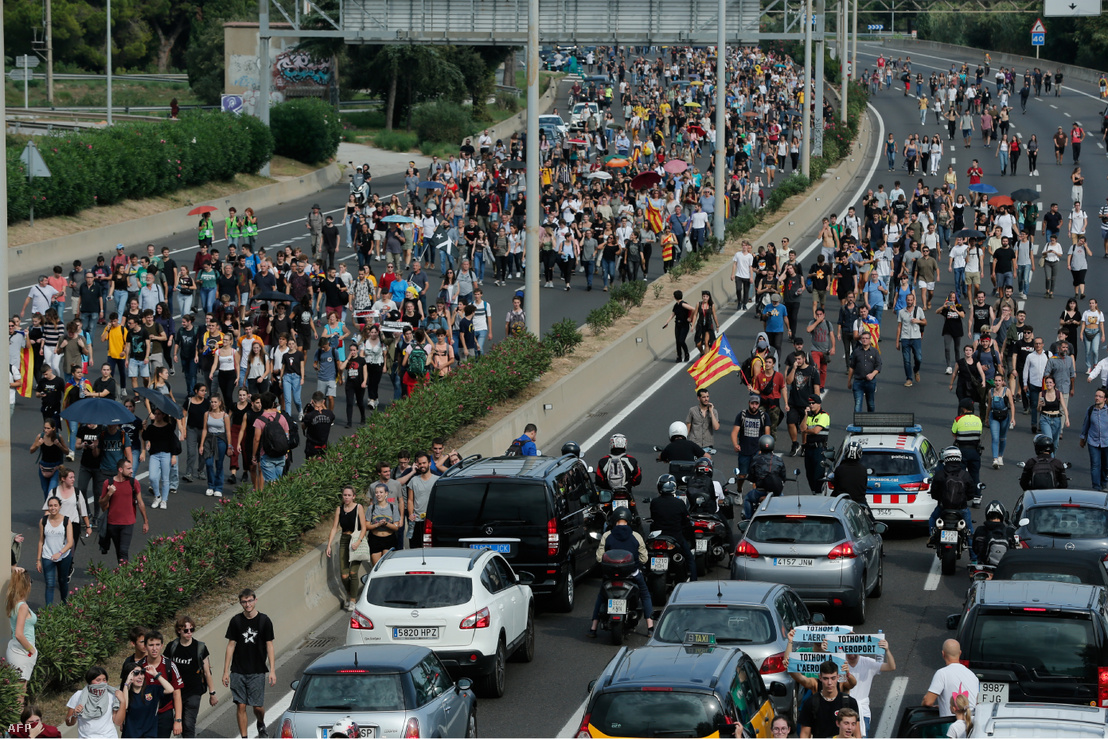 People walk on the highway towards El Prat airport in Barcelona on October 14 2019 as thousands of angry protesters took to the streets after Spain's Supreme Court sentenced nine Catalan separatist leaders to between nine and 13 years in jail for sedition over the failed 2017 independence bid.
Fotó: Pau Barrena / AFP

The ambassador of Spain to Hungary, Anunciada Fernández de Córdova addressed a letter to Szájer calling his comments about the existence of political prisoners in Spain unacceptable, stating that Spain is a full democracy with the rule of law, and ranks amongst the first in Europe in terms of the promotion and protection of fundamental freedoms and the separation of powers, clarifying:

"We do not criminalize political dissidence. Freedom of expression has the highest guarantees in Spain: secessionists daily voice their ideas in the media, in the Catalan Parliament or through political platforms and pro-independence demonstrations. No Catalan politicians have been prosecuted for their ideas, but rather for acts carried out under their institutional responsibility, which constitute criminal conducts according to the Spanish Criminal Code, specifically the crimes of sedition and misuse of public funds. Therefore, the term political prisoners is a large distortion of the Spanish legal reality."

The ambassador explained that the Spanish Supreme Court's decision "met all requirements of due process, transparency (the trial was followed by over 600 journalists and broadcasted live on television), and separation of powers", showing that the judiciary is independent and functions properly within a social and democratic state governed by the rule of law.

As the press office of the Fidesz delegation in the European Parliament informed Index on Thursday, József Szájer sent the following response to the Spanish Ambassador:

I would like to apologize for my misunderstandable and incorrect statement I made at a lecture in Budapest on Tuesday. I do not think that there are political prisoners in Spain.