According to the official coronavirus website of the government, the number of registered cases of COVID-19 in Hungary is 525, three people recovered and four more people have died since Monday. The government has also released the infection map which shows that most of the infections happened in the capital, Budapest.

The website states that the virus had entered into community transmission, and anyone anywhere could be infected, the number of people carrying the virus is considerably higher than the number of confirmed cases.

Since yesterday, the government releases some basic information about the deceased, according to which four newly announced victims were all above 65 and had chronic illnesses, For further details, see our continuously updated article here:

The government has also released a (static) infection map, which they have thus far held back saying that geographical information about patients is considered sensitive data. The map shows what the Chief Medical Officer had said multiple times, the virus is indeed already present in all Hungarian counties, most of the cases are in Budapest (almost half of the total, 232), Győr-Moson-Sopron and Szabolcs-Szatmár-Bereg counties are in second and third place with 26 and 25 cases respectively: 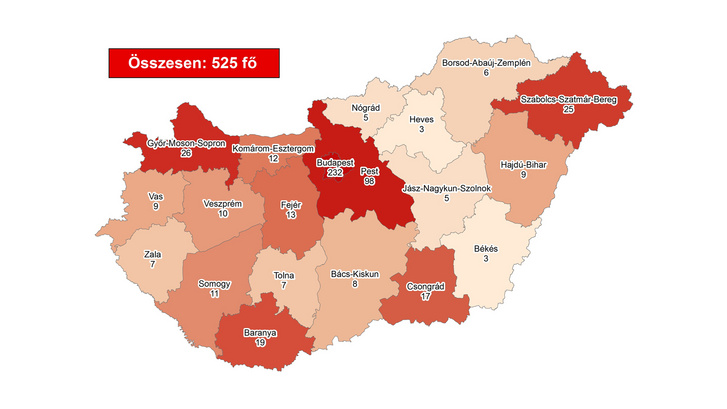 Budapest does not only have the most cases in total but also proportionally: there are 12.27 cases per 100 000 inhabitants (as of 31 March), which is near twice as much as its agglomeration, Pest county, where the virus is the second most common:

For our complete English coverage of the epidemiological situation in Hungary, see our file: