Hungarian Academy of Sciences stripped of its research network On Tuesday, the Fidesz supermajority in the Hungarian Parliament passed a bill submitted by the Ministry of Innovation and Technology that ends the year-long struggle for the research institutes of the  Hungarian Academy of Sciences. Disregarding all of the Academy's suggested changes, the new law takes the entire research network away from the Academy and hands them to a new organisation that gets to use the Academy's property without remuneration. The Academy is likely to initiate the law's constitutional review as they believe it violates academic freedom and their right to hold property.

The Hungarian Government's intention to bring about changes in the way Hungarian scientific life is funded first manifested itself last June when the 2019 budget proposal intended to place the Ministry of Innovation and Technology in charge of around two-thirds of the Academy's funding. The scientific community strongly objected to this proposal, many said that it would endanger academic freedom in Hungary. Following several bouts of negotiations and several alternative proposals put forth by the MTA, the mostly one-sided dispute that lasted almost a year ended at the beginning of June, when the Ministry of Innovation and Technology submitted a legislative proposal to the Parliament that basically swept all suggestions of the Academy off the table.

The law, just passed by the parliament, with 131 votes in favour and 53 against and 3 abstentions, takes MTA's research institutes away from the Academy and places them under the control of the new Eötvös Loránd Research Network (ELKH). This new organisation will get to use the Academy's property without remuneration. The new law also creates the National Scientific Policy Council, an advisory body lead by the Minister of Innovation and Technology meant to set the general directions of scientific research.

The ELKH will be controlled by a 13-member governing board with six delegates of the Academy and six of the Government, and a president jointly nominated by the Academy and the Ministry. All members (including the President) will be appointed by the Prime Minister, but there will be no direct, formal government control, however, as all decisions require a simple majority, the Academy's delegates have little chance to go against the will of government delegates.

This board will be aided by a group of advisors comprised of internationally acclaimed foreign researchers who will be representing the "interests of science", as the Ministry's press release stated, and will assist the regular performance assessments to be carried out by the ELKH.

By the way, the creation of the ELKH is exactly what the Minister promised not to do: on audio footage from 2018 acquired by Index, the Minister was trying to reassure the Academy at the beginning of the coordination process by saying that the Government is not planning to separate the research institutes from the Academy and they do not wish to set the areas of research. We asked the Ministry about what happened since then, and they told us:

"The sentences cited are from the beginning of the negotiations, and since then, the long and fruitless procedure resulted in changes in the positions of both sides."

The National Science Policy Council was also created by the Parliament today. The president of this council, that will only be responsible to the Prime Minister, will be the Minister of Innovation and Technology. 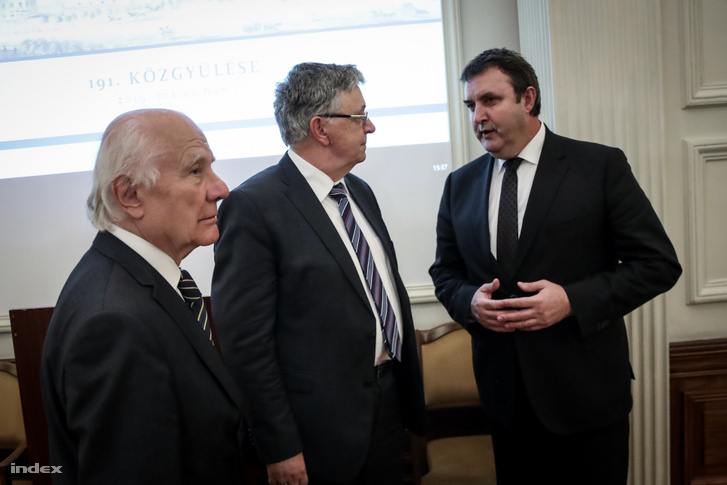 László Lovász, the president of the Hungarian Academy of Sciences (centre) and László Palkovics (right), the Minister of Innovation and Technology at the 191. General Assembly of the Academy on 6 May 2019.
Fotó: Huszti István / Index

The task of the Council will be to provide opinions and suggestions concerning the Government's R&D and innovation measures, including the program strategy of the National Research, Development, and Innovation Office Fund. The council's members will be "influential individuals from the field of economy, science, and administration" invited by the Prime Minister based on the suggestions of the Minister of Innovation and Technology.

The Ministry of Innovation and Technology maintains that all state funds spent on research must have tangible results with regards to the Hungarian economy, and their aim is to have more research projects that lead to inventions and patents, as their press release issued on 12 June stated. The Ministry opines that the current system is inefficient, therefore it needs to be reinforced both institutionally and financially, and that the new budget brings about the possibility of a unified redistribution of funds that is based on performance.

The press release states that two-thirds of the governing body of the ELKH will be made up of "practitioners of science" taking personal responsibility for the quality, and the Ministry hopes this will improve the number of domestic and EU research tenders won by the institutes.

On the same day, 12 June, the Hungarian Academy of Sciences held an international press conference. László Lovász, the President of the Academy said there that the Academy has been running the research network successfully and MTA even prepared several strategic documents to satisfy the government demand for increased innovation, but the Government has failed to justify the separation with a comprehensive strategy. Answering journalists' questions, Lovász said he thinks the real reasons behind the changes could be the Government's general policies of centralisation. While Lovász thinks that the Minister strongly believes in technological progress in Hungary and wishes to acquire the means to further that, he said that there could be some personal bad feelings in the background as well. Lovász noted that research institutes have criticised government policies on a scientific basis before, which officials should not take personally, and he added that the Academy suggested having more direct channels of communication with the Government exactly for that reason.

Lovász also said that while MTA has been trying to "participate in the negotiations in a constructive and professional way," the Government has not done so. The first draft of the amendment to the law on the Academy was sent to the Academy for an expert opinion with a 54-minute deadline, and as the Academy's research budget was placed in the hand of the Minister last year, the government made "several attempts to unlawfully withhold the release of funds." Lovász also noted that the resolutions made by the joint committee of the Academy and the Ministry were utterly disregarded during the drafting of the bill that was since passed by Parliament, just like the Academy's suggestions.

Lovász said that the scientific community clearly refused the governmental plans, and that was also made apparent by some of the best researchers already having left the country. He added that the new institutional framework jeopardises academic freedom, and having more government control does not equal more innovation. The Academy's president warned international press that the Orbán government's example might soon find followers in other EU countries as well. 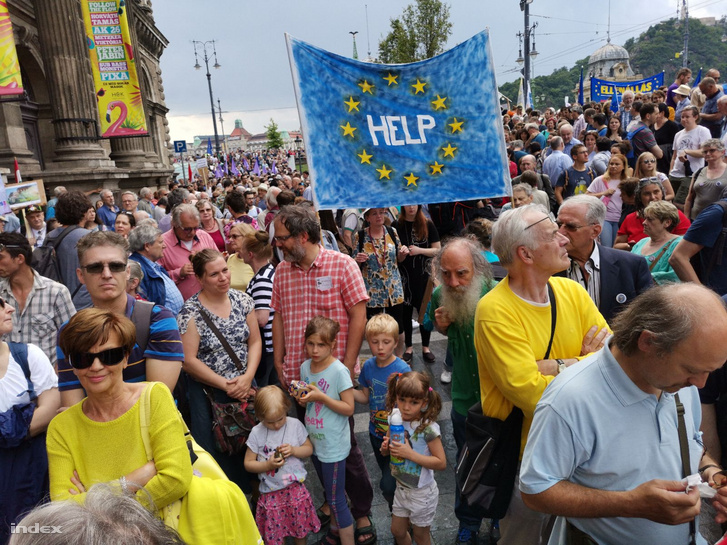 Demonstrators in front of the MTA building on 2 June 2019 protesting the proposal for the law that was accepted today and strips the Academy of its research network.
Fotó: Nagy Attila Károly / Index

Earlier, when the proposal for the law passed today was submitted to the Parliament, the Hungarian Academy of Sciences strongly objected to the separation of the research network from the Academy and suggested the Ministry revoke parts of the proposal that concern the Academy. The Academy gave the following reasons for this:

Now that the proposal has been passed into law, the Academy is likely to seek constitutional review as the 12 June unanimous resolution of the Academy's Governing Board stated that it would be inevitable due to the serious constitutional concerns surrounding the bill. 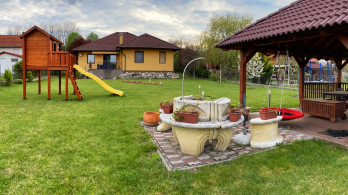 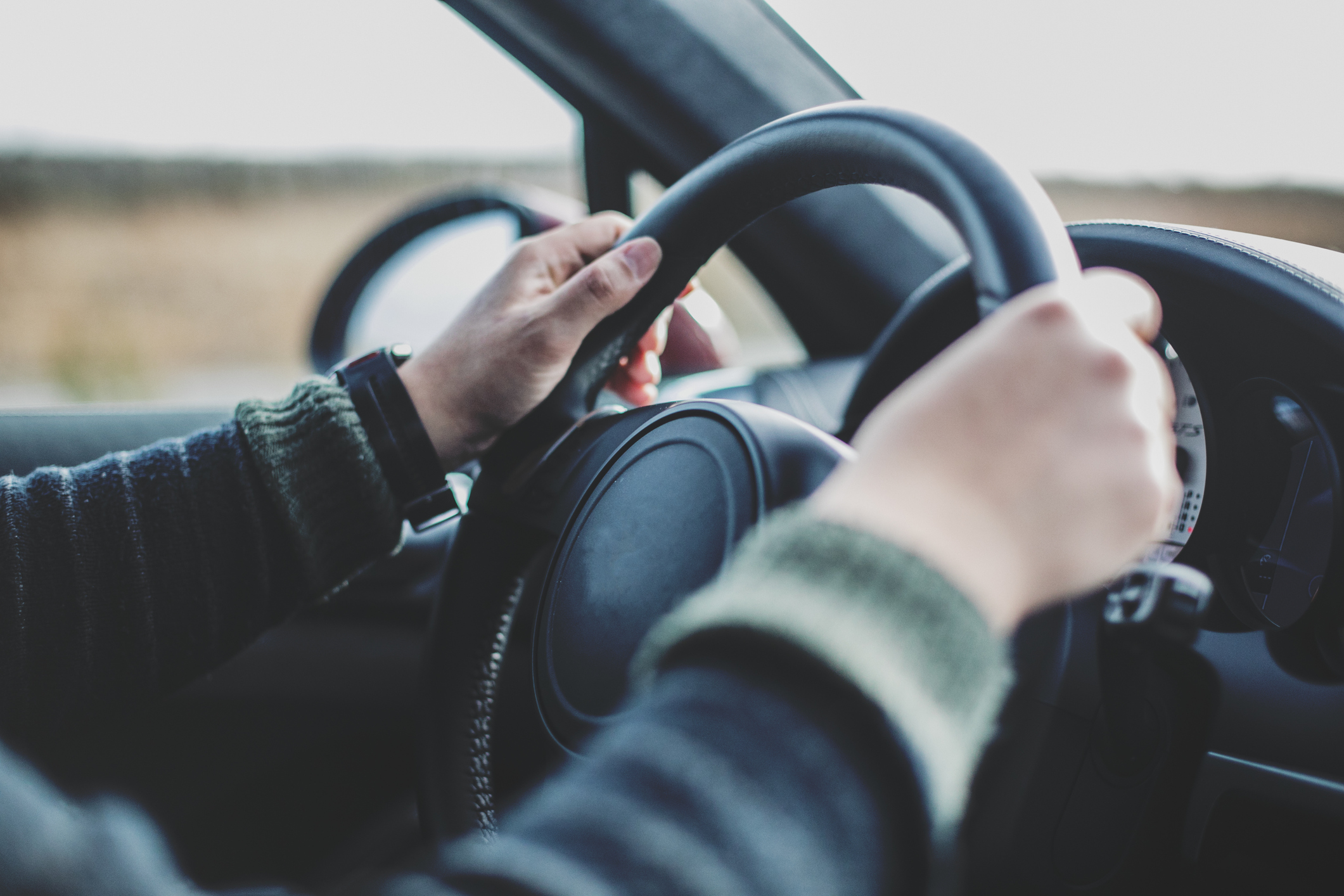