Archaeologists of Eötvös Loránd University found unparalleled treasure in the Baradla cave, a part of the Aggtelek Karst, a more than 25 Kilometre long cave system. The cave will be used to help people with respiratory diseases heal, but before the development could begin, archaeologists had to assess the area. A week ago the metal detector started signalling in an area which they checked at least ten times with no results. The decorations of the Bronze-age ceremonial vestments were hiding under the rocks, and now they will be taken to the Hungarian National Museum from their mystical surroundings. Dr. Gábor Szabó, the archaeologist who made the discovery, spoke to Index.

The Baradla cave, which spreads over to the Slovakian side of the border, is one of Hungary's most well-known dripstone caves, and it has been the subject of exploration for over 150 years. The chance of a great discovery is rather low: people had been robbing it since the 1700s, and these days, thousands of visitors are walking through the paved path that leads through the cave.

This is where an in-depth archaeological assessment managed to unearth a group of 5000-year-old, and a group of approximately 3200-year-old findings from the Bronze Age. The latter one was discovered entombed within the stones.

"The 59-piece finding was noticed near an underground stream, under rocks stacked in the shape of a little house, exactly in the kind of place where one imagines a treasure trove. Usually, these sort of places are not hiding anything, this time though, we were lucky"

Szabó began to explore the area as a part of his metal detector archaeology project which resulted in at least thirty bronze and gold findings in the country so far. Gold treasures were already found in the Baradla cave in the 1920s, and Szabó and his team had also found a golden ring for braids. The fact that the cave is not exactly an untouched spot is supported by the wide variety of findings - sometimes, archaeologists find valuable spearheads, but twenty-year-old light fittings are not uncommon either, sometimes immediately next to each other.

The archaeologists were lucky that the area that they explored was previously paved. As a result of the stream's deposits, the ancient layers were protected by 20-30 centimetres of limestone, and the pavement (placed right onto the cave's tufa) hid the materials underneath from prying eyes.

One of the people manning the metal detectors, Lajos Sándor had walked through his designated path numerous times, but the detector did not go off until suddenly it started furiously beeping over a crevice behind the rocks. It was immediately apparent that it is not a XX. century finding.

Hearing this, the archaeologists ran through the narrow and winding corridors (the current dig explores a larger, 80-90 square metre room and the 120-metre-long corridor leading there), and they have started removing dirt and soil from the Bronze Age objects with their special wooden tools. By midnight, they had success. 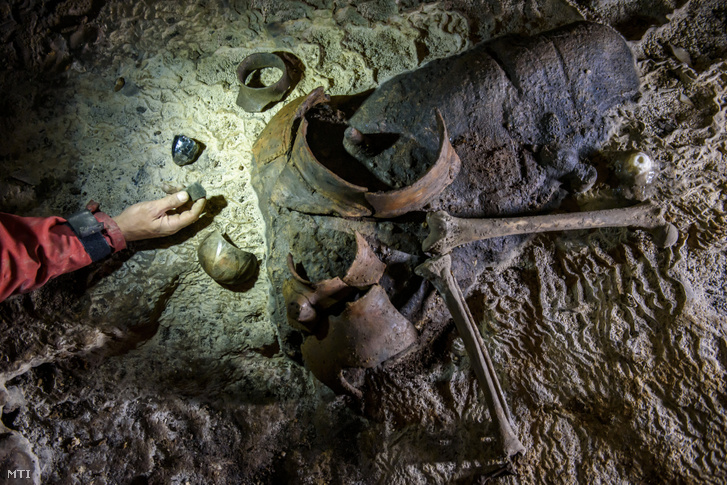 The 59-piece finding mostly consists of round, richly decorated bronze mountings and sparrow-tail shaped pendants, archaeologists think that they might have been pieces of some kind of a ceremonial vestment. The location of the objects suggests that they might have been on folded a piece of clothing similar to a chasuble, but that completely disintegrated - not even organic traces of it were found. The archaeologists of Eötvös Loránd University also found ornate ceramics, human remains, and animal bones, some in large piles, that seem to have been ritually sacrificed. These all point to the Baradla cave having been a sacred place thousands of years ago. Szabó said:

"These days, the cave walls are covered in black soot, but back then they were glowing white, it had to be a beautiful space. Even today, smelling the air of the Baradla cave, you feel that it is a mystical place. It is an astounding interior."

Szabó thinks that similarly to Stonehenge, the Baradla cave must have been an ancient holy place where communities arrived even from far-away lands to witness the rituals performed there.

"This place could have functioned as a destination for pilgrimages. Sacrifices were made, sacred places were established, there were initiation rituals - the quality ceramics, the piles of animal bones, remains of food materials serve as proof for that." 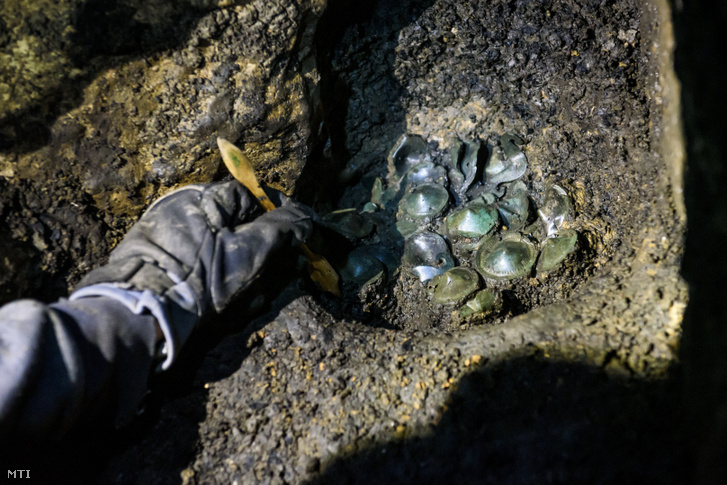 The functions of such spacious caves had long since been polemised amongst archaeologists. Szabó thinks it is unlikely that these would have been used as permanent habitats: the constant 12 C° temperature along with the 100% humidity may be useful for treating asthmatic diseases, however, it makes the cave a place unfit for people to have lived in it. It could have functioned at most as a temporary shelter, and first and foremost, a ritual place.

The most archaeologically interesting caves of Hungary are usually hiding palaeolithic findings, but the Baradla is an exception. There are no Old Stone Age artefacts, but it is rich in Neolithic findings on both the Hungarian and the Slovakian side of the cave. There are two periods represented there: the objects left behind by the Bükk culture that appeared around 5000 B.C., and the Bronze Age findings from around 1200 B.C.

There are great numbers of ornate pottery fragments that differ from the kind typical to the era's settlements in the area: The abstract, geometric patterns, the ceramics with yellow, red, white and black paint over the engravings are trademarks of the Bükk culture. The people assumed to have arrived from the direction of the Hungarian Great Plains carried their culture with them to the hills, along with the knowledge of animal husbandry and agriculture.

"They were born explorers, they had to terraform an unknown world,"

as Szabó painted their portrait.

Few artefacts remain from the 2000 years following the downfall of the Bükk culture, the next vibrant era for this country of hills and caves was ushered in by the Kyjatice culture (named after a southern Slovakian town). The most significant finding, comprised of 59 bronze pieces, that was hidden behind the rocks can also be tied to the rites of this culture that was mostly known for its warring clans, spectacular swords, and fortified settlements. They had more refined idols, and probably more complex mythology, most of which is a mystery even for researchers due to the lack of written sources. What they imagine is that they had a shamanistic religion with a complex relationship to the supernatural; their colourful rites and the rich sacrifices, however, are proven by the Baradla findings. 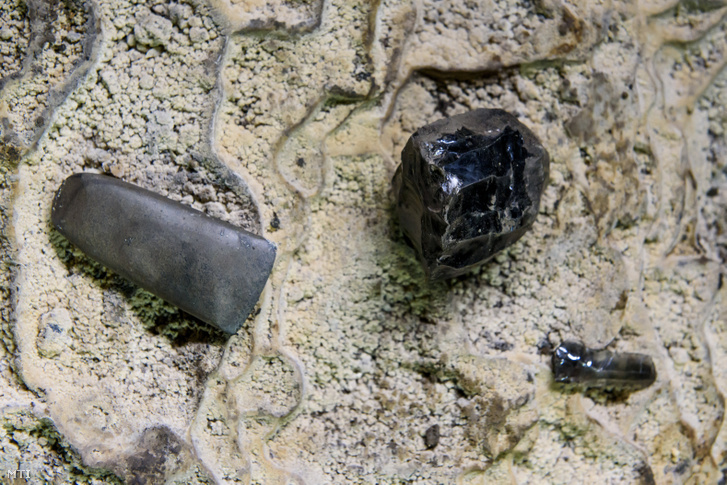 The objects found with metal detectors by Eötvös Loránd University's archaeologists will be taken to the Hungarian National Museum. Isotope scans will be done to reveal from where the animal bones remaining from the sacrifice feasts were taken to the Baradla cave, and the human remains assumed to originate from the neolithic era will be carbon-dated. The cold air of caves tends to preserve DNA in the bones really well, so the findings could have a huge archaeogenetic significance as well. The archaeological excavation will continue in August and next year.