According to a non-public proposal acquired by independent news website Hvg.hu and addressed to the government by the Ministry of Human Capacities, the ministry is planning to turn the Petőfi Literary Museum (PIM) into a power centre dedicated to serving the government's cultural goals. The institution's budget is to be doubled, and there are plans for a new cultural periodical, the reshuffling of the current literary scholarship system, creating a centralised structure for exporting literature, and starting training courses for journalists with "an eye on Hungarian interests." The director of the institution spoke reassuringly saying that these measures will not mean the exclusion of authors and journalists who are not loyal to the government.

The ministry wants to realign the museum in order for it to become the most important institution of Hungarian literature. The document intends the institution to shape the literary public discourse, "let it deal with politics -  it should take a stand by the protection of European and Hungarian values. It should generate discussions in society, and it should provoke productive conflicts," as the document states. Most of the proposal is heavily based on the management concept penned by the current director of PIM Szilárd Demeter who was appointed to the position after his predecessor was terminated following a successful character assassination by pro-government media.

According to the proposal, Orbán's government is ready to take on Hungary's cultural life as the Hungarian economy has already been stabilised:

"After the stabilisation of the country's economy, the reduction of its financial vulnerability, the creation of jobs, the transformation of the tax system, the enforcement of the position of employees and families, and thanks to these achievements, such novel goals can be set in the field of culture that can create a new golden age for the culture of Hungary and of Hungarians beyond the border."

Last year, the Petőfi Literary Museum made headlines when its former director Gergely Prőhle was first attacked in a piece belonging to the series of articles titled "The cultural dictatorship of whom?" published by pro-government daily Magyar Idők (which has since been transformed into Magyar Nemzet). The article condemned the director for granting scholarships to "leftist-liberal" authors, proving its point by listing authors supported by PIM along with their remarks made against the government. Then Prőhle was condemned for supposedly condoning the Hungarian Soviet Republic. 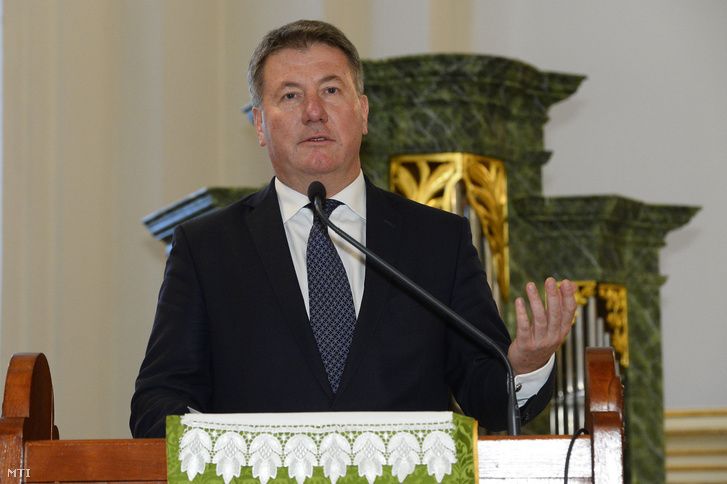 At the time, Prőhle reacted by denying that the exhibition in question 'condoned' the Soviet Republic, instead, it merely presented it as historical context for Lajos Kassák, an outstanding poet of the Hungarian avant-garde. Prőhle also argued that

"the nature of public institutions is that they cover the entire spectrum as the money is from the taxpayers,"

and not all of them are supporters of Fidesz. In the end, Prőhle's defence did not help him keep his job - pro-government weekly Demokrata reported in August that Miklós Kásler, the Minister of Human Capacities was deeply dissatisfied with the aforementioned exhibition and sat down with the director to talk. Their discussion concluded with the Minister telling Prőhle that he has to resign. The director of PIM claimed not to know about such a request, however, he was ultimately terminated in October effective as of 1 November 2018.

The new director since then is Szilárd Demeter. He is an author, editor, philosopher, former university teacher and publisher. He was the philosophy editor of the cultural periodical Korunk for three years and the editor-in-chief of philosophy journal Kellék for over a decade - he is still on the editorial board. He also worked for the Fidesz-affiliated think-tank Századvég. 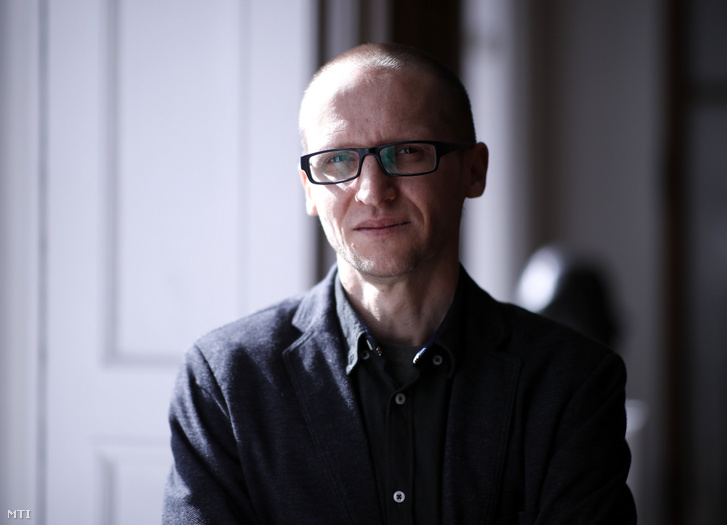 As Demeter confirmed to Index, the proposal acquired by HVG is heavily based on his management program that was attached to his application for finalising his position as the director of PIM. Referencing the museum's eponym, poet and 1848 revolutionary Sándor Petőfi, the program assesses that Hungarian literature has always sought to change the world instead of merely presenting it to the reader. The program's second, somewhat unusual chapter titled "Political context" makes Demeter's intentions to give the museum a distinct ideological profile clear as day:

We see that those whom we call globalists claim all identities to be correct and good, except for the national identity. Every religion should be protected, except for Christianity. Practice shows there are weak and strong identities. The question we need to ask ourselves concerning the oft-used Brussels buzzword is this: Who integrates whom? [...] We, Christian nations of Europe are currently losing this battle. Therefore, our job is not to look for arguments in support of the Christian and national culture, but to strengthen our own identity.

This, however, will not mean that authors not loyal to the government would be placed on the backburner according to Demeter, who told Index:

But I maintain that there is a place for all Hungarian writers in PIM who are writing for Hungarian readers and are above a - compared to my taste - rather low standard of quality.  I will not get into that, precisely because I know this is a subjective topic, and I do not wish to shape the largest literature museum in the Hungarian-speaking region to my image.

So I'm not banning anyone on professional grounds right off the bat. Quite the contrary.

If someone can attract a significant number of readers with a contemporary literary effort, I'll be the first to congratulate them, because Hungarian literature and reading culture only win with such performances.

The ministry wants to "rethink and retune" the institution and turn PIM into a "cultural centre of power". The document notes that PIM has little influence over the present and the future of Hungarian literature, therefore, it needs an extended toolset. The proposal intends PIM to be a cultural incubator that reaches the widest possible audience in the Carpathian basin. It's also been suggested that all authors' organisations should be in the same modern office together with PIM.

Under this new concept, PIM would be in charge of literary exchange: it will be introducing Central European literature to Hungary and also exporting Hungarian literature. As the document states, translation of foreign literature to Hungarian and Hungarian literature to foreign languages is currently influenced by the needs of the market, a procedure which "lacks concept." The new system would offer training courses and regular funds for translators and would centralise all the smaller literary translation grants under PIM that would - in coordination with publishers and professional organisations - choose the list of works that are fit for translation subsidies. 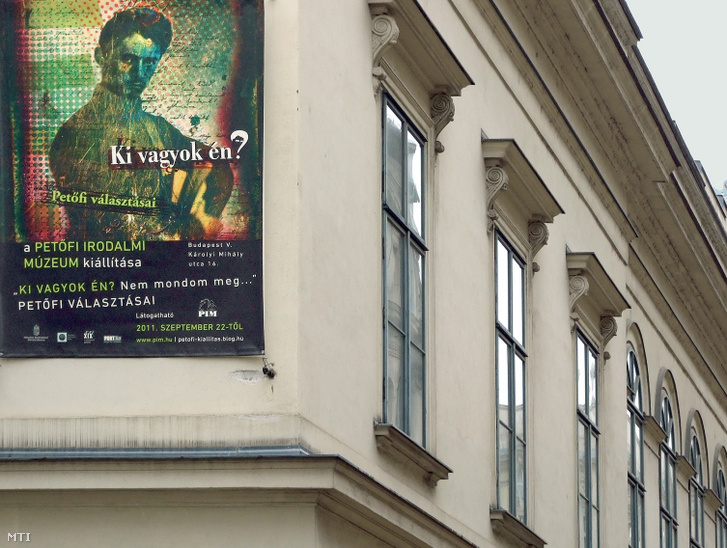 "Who am I?" the poster featuring the portrait of Sándor Petőfi asks on the side of the Petőfi Literary Museum.
Fotó: Jászai Csaba / MTI

The focus of the museum will shift from literature described by the proposal as "writers writing for writers" towards a more reader- and visitor-centric approach that includes tying the authors more to the museum. The proposal mentions that the works created with help from the three scholarships currently involving the museum (Móricz Zsigmond Literary Scholarship, Babits Mihály Literary Translators' Scholarship, and Örkény István Playwright Scholarship) do not get properly "channeled in" to the museum, therefore authors winning the scholarship will be obliged for monthly or bi-monthly appearances at the institution's events. We asked Demeter if there are any other changes to be expected with regard to these scholarships, but he said: "We will cross that bridge when we get there." He also said that he coordinates with authors' organisations and book publishers, taking their points into account if they are "relevant, and not self-legitimating."

The proposal argues that the mere existence of the literary museum is considered a political statement in contemporary Western culture, therefore the museum should not be afraid to take a stand by the protection of European and Hungarian values.

Journalists with an eye on national interests

The proposal also places the National Talent Development Non-Profit company (Nemzeti Tehetséggondozó Nonprofit Kft., NTN) under the control of PIM. The goal of this new structure will be to train

"well-prepared, responsible journalists who are well-informed, capable of abstraction and critical thinking, with an eye on national interests, who will be able to shape the world and make it better."

What exactly the "practice-oriented talent development system" entails is as of yet unknown, but there are plans for a scholarship program and an education centre created in cooperation with the "owners and leaders of various media companies."

"I would not like Hungarian culture to be regarded merely as the product of 'dead white men' by one of the lunatics, and I would not like to be in a situation where I would have to accept that because that is what is considered PC. On the other hand, one could dig up many arguments within PIM in support of the Hungarian and European culture that is based on Christianity. Showing this is also a Hungarian national interest."

"I don't subscribe to the myth of objective, independent journalism anyways."

A cultural journal aware of its role in the national strategy

The proposal also suggests that the state should create a new cultural journal called "Országút" that would cost taxpayers roughly 400 million Forints (approximately €1,3 million) in the first year and around 300 million Forints (around €1 million) every year after that. The justification for the state funding of Országút is that "in today's situation, launching and operating a cultural paper cannot happen without funding from the state." This rings especially true in a time when most cultural journals were forced to close due to the state backing out of supporting them. Also, the document states that the new paper should "acquire significant advertisement revenues". The document does not specify if these revenues should come from private advertisers or the state, though stuffing government-affiliated press with ads from the latter is common practice.

According to the document, the new cultural biweekly paper would be edited and written by the best professionals who are

"aware of the tasks of national strategic importance such a paper has to fulfil."

The new, "restrained" journal would not directly pick sides in partisan arguments, however, it would "bravely discuss the questions of public life that are important to the nation."

We asked Demeter about the possible leaders and editors of Országút, but he could not give us definitive answers. As he said, he met the originators of the idea for Országút, but they told him that the specifics would be revealed before him depending on "the probability of their realisation." But as Demeter proclaimed, he's willing to get behind anything that furthers the cause of Hungarian literature. Whether or not Országút will suffer the fate of Magyar Krónika, the cultural periodical launched by the government a few years ago in which no expert who did not yet pledge his allegiance to the government was willing to write, Demeter said he does not want to convince anybody to join Országút:

"I am building systems and I provide the opportunities that anybody can take in accordance with their will and talent."