Hungarian President ahead of UN Climate Action Summit: Hungary has a smaller responsibility for climate change In an interview on Hungarian public media's Radio Kossuth, President János Áder was asked about next week's UN Climate Action Summit where he will be representing Hungary. Áder said that the summit will be a political debate and noted that no document will be signed, the meeting will be all about expressing intentions and the willingness to act.

"With regards to the looming climate catastrophe, it is a good thing to examine the responsibility of Hungary and what measures the country should implement, although we should not get out of proportion."

said Hungarian President János Áder during his interview in public media's Kossuth radio on Friday morning. Áder said that Hungary's carbon emissions are only 0.137% of the world's total emission and only 1% of that of the European Union, and at the same time, the EU is only responsible for 10% of the global emissions. He remarked that the total European carbon emission in 2017 was only slightly less than what China puts into the atmosphere during a single day. The President added: "So when we talk about the climate protection measures Hungary needs to implement, it is commendable to talk about that, however, we must see that we are not in the same league as the big polluters" such as the USA, China, or India.

"Our responsibility is way smaller."

About the challenges the EU will be facing over the coming years, Áder said that one of the great debates of recent times was about whether or not the EU, and in it, Hungary can achieve carbon neutrality by 2050, adding that while Austria, Spain, and Ireland have increased their carbon emissions, the per capita emissions of Hungary are below the EU average and that the country has managed to decrease its carbon emissions as much as Denmark relative to the 1990 data. Áder also stated that by 2030, solar capacity will increase by the tenfold, coal-based energy production will be phased out, and if the construction of the Paks 2 nuclear power plant is completed, more than 90% of the Hungarian electricity production would be carbon-free. "There will not be that many countries that can say that by 2030," the President noted.

On Friday afternoon, escorted by a group of opposition parties' representatives, the chair of the Parliament's Sustainability Committee Erzsébet Schmuck of LMP and the opposition's joint candidate for Lord Mayor of Budapest Gergely Karácsony visited the residence of President Áder to deliver a proposed climate resolution also submitted to the Parliament previously. 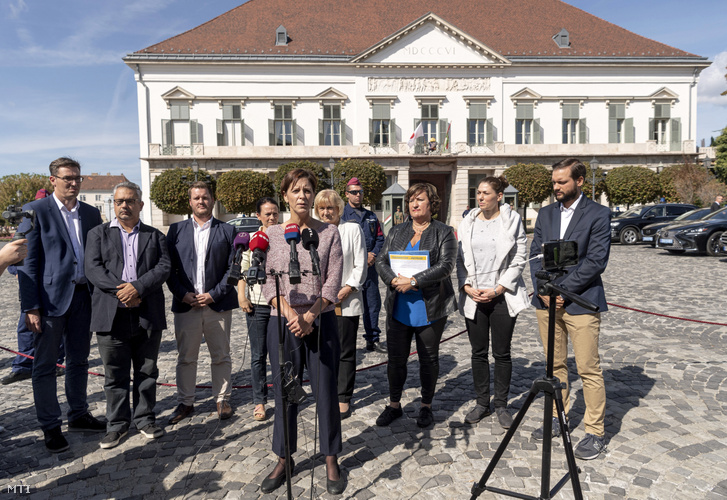 At the press conference in front of the presidential residence, several MPs voiced their concerns over what Áder said on state radio on Friday morning. Schmuck recalled the words of UN Secretary-General António Guterres from two days ago urging governments to take much stronger environmental action and calling climate change an "emergency." Explaining why the proposition had to be delivered to Áder, Schmuck said:

"As János Áder did not attend the parliamentary session on Wednesday to properly discuss the tasks concerning climate change before the UN summit, which is why we delivered our proposition for a parliamentary resolution to the President's office."

The proposition was eventually given to the chief director of the President's Office.

The Parliament did not have a chance to debate the resolution as the extraordinary session of Parliament called together by the opposition was boycotted by the MPs of the governing coalition Fidesz-KDNP on Wednesday. Fidesz issued a press release explaining their absence saying that the opposition called a parliamentary debate on 12 December 2018 which the opposition subsequently refused to attend, and as the governing party's statement read:

"This shows how frivolous the opposition's initiative really was."

That debate in December was the last item on the agenda of a rather scandalous session where the Overtime Act and the since (temporarily) revoked law establishing administrative courts was passed, triggering a  string of protests.

To learn more about the climate situation in Hungary, read our earlier pieces about Fidesz's climate policies and about the environmental attitudes of the V4 countries.