Why is there government propaganda at a music festival? Not even Volt, Hungary's second largest music festival is immune to the fact that communism fell 30 years ago, and that this year is the 30th anniversary of the third Hungarian republic, despite the "Republic of" part being officially removed from the country's name by ruling party Fidesz's parliamentary supermajority.

As a testament to that, Volt Festival's stage screens show a TV spot of the Hungarian Government in between acts every 7 or 8 minutes, with "Winds of change" and a young, stubbled, messy-haired Viktor Orbán blaring from the speakers:

"If we do not lose sight of the goals of 1956, we will get the chance to elect a government that immediately starts negotiations about the withdrawal of Soviet troops."

The speech quoted in the spot was held on 16 June 1989 at the reburial of Imre Nagy, the Prime Minister of the 1956 revolution who was executed by the communist regime after Soviet tanks put a violent end to the Hungarian uprising. This reburial was a historic event with huge symbolic significance - finally getting the chance to say proper farewells to the fallen heroes of the revolution foreshadowed the collapse of the entire regime, since for 33 years, Hungarians were not even allowed to talk about, as the contemporary euphemism called it, "the regretful October events."

Viktor Orbán was one of the invited speakers there, and he did surprise the crowd by demanding the withdrawal of Soviet troops - some welcomed what were in those times considered fighting words, some thought that the rhetorics did not fit the solemn occasion.

Nevertheless, Viktor Orbán being the first to publicly stand up against the Soviet army's Hungarian presence became sort of a flashbulb memory despite the fact that the government of the Hungarian People's Republic had begun those negotiations three months earlier (but kept them a secret until July as per the request of the Soviet Union), and that the first person to publicly demand the withdrawal of the Soviet army was actually actor György Cserhalmi, who read the 12 demands of the regime's democratic opposition at the 15 March 1989 demonstration in front of around a hundred thousand people on Szabadság (Liberty) square. 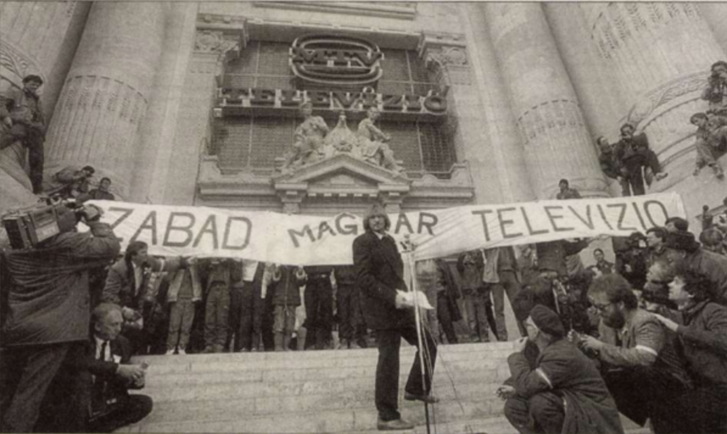 György Cserhalmi speaking at the demonstration on Szabadság square on 15 March 1989.
Fotó: Arcanum

However, the current Hungarian government are doing their best to propagate that false memory, well illustrated by the above spot that runs on television stations as well - and also by the outdoors exhibition of the House of Terror museum on Andrássy Avenue commemorating the regime change without as much as mentioning members of the democratic opposition other than Orbán. The person in charge of the memorial year is Mária Schmidt, the director of the House of Terror and one of the main ideologists of Fidesz who was responsible for the 2016 year of 1956 remembrance as well, historical inaccuracies of which were at the time pointed out by the 1956 Institute - this year, however, that is not so likely to happen.

It must be noted that there is nothing surprising about the presence of government propaganda at Volt Festival: the government allocated a billion Forints from the state budget for developing the utilities at the festival's location, state (and Fidesz-affiliated) sponsoration is rampant (there is the Erzsébet-voucher Folk Stage, the Student Loan Cafe, the Hungarian Electric Company Oasis, and so on), the Prime Minister's daughter used to be a trainee there and had been in frequent contact with the main organisers, and the operation of the Budapest music club Akvárium (originally named Gödör) was given to Volt's organisers after Gödör was forced out from the venue. Akvárium operates pretty much the same way ever since as it did when it was still Gödör, with the exception of the occasional event held by the religious congregation of the Prime Minister's son (who, by the way, has since given up on the pious life in order to join the army).

The organisers of Volt Festival told us that they "have a contract for the events 30 years ago," and Viktória Vető, the festival's press contact said that "the giant screens feature different videos in regular rotation," and the government's spot is not an exception.

A Hungarian artist, noÁr, has since cancelled his appearance at the festival saying:

"We are saddened by the fact that propaganda managed to find its way even to a music festival, and government-commissioned videos are appearing on the screens in between the shows. We think we have nothing to do at a festival like that. Or in fact, propaganda has nothing to do there. (...) When the Black Eyed Peas or Cypress Hill perform there, do they know that their opening act is a government propaganda spot?"