The Parliament's passing of the Overtime Act and establishing new administrative courts under strong ministerial control sparked a series of protests since last Wednesday. For three consecutive days, demonstrators protested the new laws, with the novelty of opposition parties suspending their infights and stepping up against the ruling coalition's decisions sharing the same platform. The protests took a new turn on Sunday when the protesters took on the 8 km walk in the cold December Budapest to march to the building of the Hungarian public media after speeches heavily stressed the omnipresence and importance of the pro-government propaganda in Orbán's regime. Thirteen opposition members of Parliament decided to enter the Kunigunda road state-media complex, trying to get airtime for the five demands of the protesters.  Since then, several protests were held in towns outside of Budapest, President of the Republic János Áder signed both new laws, so the capital is bracing for more protests on Friday evening. A quick recap of the week's developments.

An eventful Monday followed the Sunday night at the state media, as MPs were ultimately denied airtime - they could only talk to the public media's security staff, nobody from any editorial departments was willing to see them. As a response, MPs held a sit-in citing their right as MPs to check the lawful operation of a public institute.

The MPs were trying to get state media's 24-hour news channel M1 to report the five demands of the protesters, which are:

The armed guards of the public media ended up literally throwing two of the MPs out of the building Monday morning and assaulting two other MPs later on in the day, one of whom had to be hospitalized. At first, security did not even allow the medical team to enter the building.

According to our information, the security guards encountered by the MPs could be under the control of the Ministry of Interior Affairs, as they are legally obliged to follow their direct commands.

Throughout Monday, MPs tried to call for the assistance of the police but to no avail. Even as the two representatives were forcefully thrown out of the building, police idly stood by. However, the district chief clerk did not waste any time when CEO of national media Dániel Papp requested the initiation of a property protection procedure. 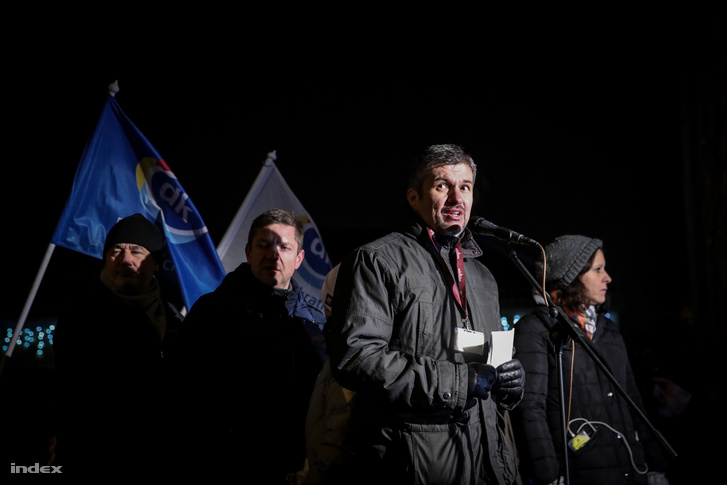 During this time, a few hundred protesters persisted and stayed in front of the building since the MPs entered the building Sunday night. At 6:30 PM, 3000-5000 people gathered together in the street for the next formally announced demonstration, as our colleague at the scene reported. There, the vice president of the Hungarian Federation of Trade Unions provisioned a general strike in case the President of the Republic signs the Overtime Act, and Ákos Hadházy urged people to let Fidesz's countryside media outlets know their opinion on their lies "politely but firmly," as Hadházy put it. He also said the lies fed to the people by the countryside media are the foundation of Fidesz's power. At around 8:00 PM, 15-20 people already showed up at county news site TEOL.hu's offices in the town of Szekszárd, and they managed to get the petition published. In the meantime at the public media HQ, Péter Márki-Zay, the independent mayor of Hódmezővásárhely said Orbán's government had fallen in Budapest, and it is time to make the countryside aware of that fact.

Following the speeches, some stayed at the public media building where satirical organisation Hungarian Two-tailed Dog Party turned the Hungarian public media's HQ into a giant projection screen on which, much to the crowd's delight, they played their platform game "Super Mészáros" that replaces Mario with Orbán's wealthy childhood friend.

Others, around a 1000 people joined youth party Momentum in their short tour of the Fidesz media conglomerate's nearby offices.

To understand why the MPs are taking such desperate measures, some insight is needed into the current Hungarian media landscape. A party having media background is nothing new - Fidesz had one before as well, owned by Lajos Simicska until their 2015 split with Prime Minister Viktor Orbán. Since then though, a number of oligarchs that quietly (or not so quietly) grew their wealth under Orbán's governance started furiously building their own media empires to replace the handful of important outlets controlled by Simicska. The hostile takeovers, smear campaigns, editorial meddling, and unevenly flowing state advertisement revenues helped them quickly expand the Fidesz media portfolio. Even up to this point, these outlets operated in a seemingly coordinated manner, but at the end of this November, their connection became apparent as their former owners donated almost all of them to a foundation formed in August, thus bringing a media behemoth encompassing 500 titles to life and revealing how the media outlets might have never really been the actual property of their original donors. Further clearing the picture, some days after the donations, Viktor Orbán signed a decree that exempts this fusion from the Competition Authority's inquiries by qualifying it as a merger of strategic importance at a national level. The decree's reasoning stated that it is "public interest."

The root of the anger directed at the public media is similar, MPs said the state channels published lies and slanders about them - without providing them with an opportunity to explain their position, as the public media service legally should. It is notable that in the lead-up to the 2018 elections, all opposition parties were granted five minutes each on the 24-hours state news channel M1, but only after the National Election Committee fined them for one-sided reporting and that fine was confirmed by the Curia, Hungary's highest court. But M1 is generally known to faithfully echo the xenophobic and intimidating talking points of government communication, see The Guardian's assessment from earlier this year. The current CEO of the national media is the same Dániel Papp who was involved in numerous examples of news forgeries during the upswing of his career in the ranks of the public media organisation. 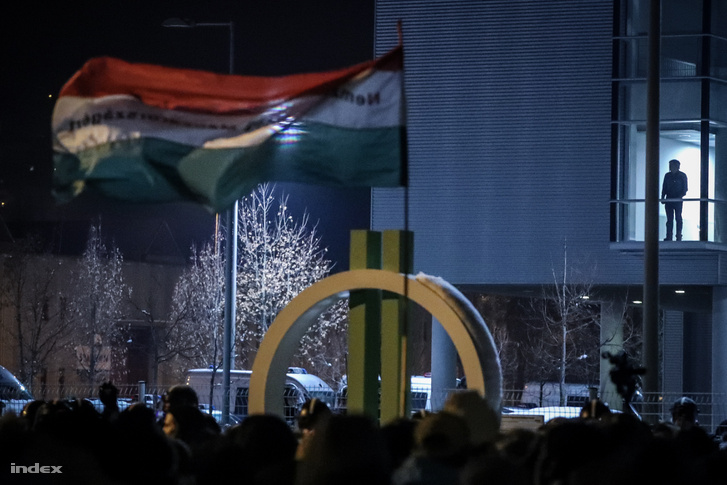 A rather ingenious form of protesting is also on the rise - Index received a large number of e-mails which contained pictures of people writing a certain explicit anti-Orbán catchphrase that was popular at the protests as well, and originates from Lajos Simicska, the former financial mastermind behind Fidesz who yelled this phrase across the entire Hungarian media in interviews given during his rage-fueled tirade after he fell out with the Prime Minister (their fight's incendiary was, of course, Simicska's media portfolio). In the meantime, we started receiving reports of the first work contract amendments drafted to fit the new 400-hour overtime possibility.

On Tuesday, Fidesz boycotted the meeting of the Parliament's National Security Committee, though opposition MPs were dead set on discussing the previous day's events at the public media HQ - including the assault of their colleagues.

That night, multiple demonstrations were held in other Hungarian towns, such as Szombathely, Sopron, and Kaposvár, some taking Hadházy's advice of visiting Fidesz's media to the heart, and the countryside protests were not over yet; further demonstrations were held in Nyíregyháza, Eger, Debrecen, Kecskemét, Miskolc, Tatabánya, and Kaposvár along the week. 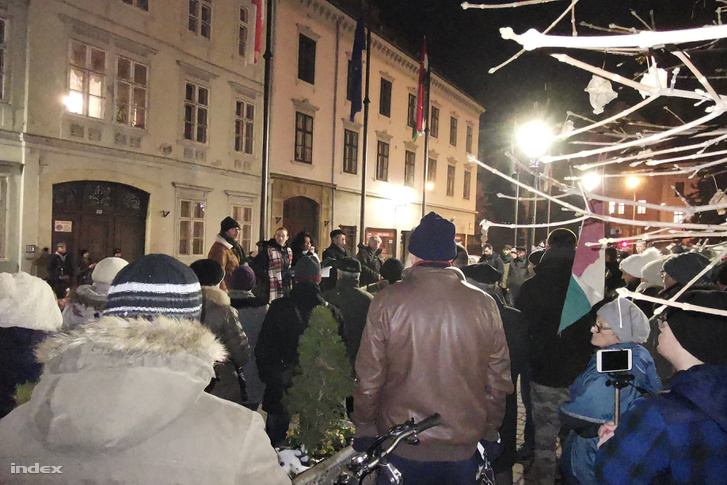 Reader's photo of the Sopron protest attended by approximately 150 people. Protesters there said they are no longer "simply against the Slave Law, this is about Orbán's dictatorship".
Fotó: Olvasónk / Péter

Bence Tordai, MP of Párbeszéd who took part in Sunday night's sit-in at the public media finally managed to achieve sort of a breakthrough - on Wednesday he managed to speak to Menyhért Dobos, CEO of the public media's television company - Tordai handed the petition over to him on a pen drive, but Dobos said it's up to the editors, since he can "not guarantee the petition's broadcast, as the television is editorially independent."

By Thursday evening, János Áder signed both the Overtime Act and the law establishing the new administrative court system, overseen by the Minister of Justice. This means that the new labour regulations are effective as of 1 January 2019, and the administrative courts will commence their operation in 2020. The new court system will be complete with its own parallel Supreme Administrative Court, diverting all cases filed against state authorities to this new branch of the judiciary instead of the Hungarian institution Curia, that was the general highest court of appeal for all court cases thus far. The minister of Justice will have strong control over these courts; the minister will be appointing the judges and presidents of these new courts and preside over their budgets.

The Hungarian protests gained huge international media attention; Reuters writes about how the two MPs were thrown out of the building, while theNew York Times even shows the video of what happened. The Guardian's continued coverage informs about the sustained resistance against the overtime act, Euronews, the French Le Monde and Le Figaro newspapers cite AFP's report, emphasising that the protesters carry Hungarian and EU flags and chant "Do not steal." German Deutsche Welle says 15,000 participated in the demonstrations which are not only against the overtime act but the autocratic government of Viktor Orbán.

Fidesz's communications director Balázs Hidvéghi said MPs tried to violently interfere with the operation of the public media network - they wanted to intervene in the editorial process. He said these are the methods of the Soros-network. On Wednesday, the government also presented their official view on the events that unfolded at the public media since Sunday - at a press conference where Index was not invited. Spokesperson of the government István Hollik complained about the damages caused by the protesters, made a note about how the protest's methods are coming from the "Soros-network," and also said that 80% of the Hungarian public rejects street violence and illegal acts.

Prime Minister Viktor Orbán said the Overtime Act serves the interests of the employees, he understands the opposition's frustrations, but a distinction has to be made between the expression of opinions and violence, he thanked the police for their work and talked about the aggressive paid protesters of the Soros-network. He said the Overtime Act is a good law. "Everyone's overtimes will be paid at the end of every month," he added, though it must be noted here that the new legislation allows for a 3-year overtime banking period based on collective agreements or work council decisions.

Protests to continue on Friday

The protests are set to continue on Friday, beginning with satirical Two-tailed Dog Party's march from Kossuth square at 6:00 PM mocking the Peace Rallies organised every now and then by pro-government organisations. Organisers made it clear in their Facebook event that it is a "march of gratitude" for the policies of the government, as

"people finally get to work eight days a week, independent judiciary will no longer be a nuisance, the homeless and annoying foreign universities are gone, and Soros, Soros, Soros."

The protest originally titled "Do not sign it, János" (but changed to "Shame on you János" upon he signed the two new laws) is set to start at 8:00 PM, also on Kossuth Square. The organisers of this event include trade unions, civilian organisations and all the opposition parties. Their plan is to march to János Áder's residence Sándor Palace in the Castle District to protest the signing.

There will be protests in other towns of Hungary as well - All opposition parties plan to take to the streets in Tatabánya, Jobbik is organising a protest in Kaposvár.

It is likely that these protests are the last ones this year, as the holidays are coming - but the opposition parties and the trade unions announced that they are preparing the next large demonstration to take place shortly after the beginning of 2019. Trade unions are organising the strike which they plan to begin near the end of January, but the chances of the strike succeeding are questionable, as a large part of trade unions and employees are passive.

Index will be broadcasting Friday's protests live on Index's Facebook page with English commentary provided by Index in English. 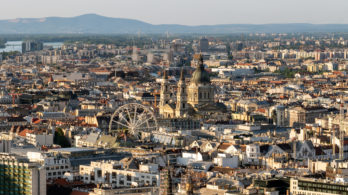