Speaker of the Parliament: Forget checks and balances, they are dumb The Speaker of the Hungarian National Assembly and founding member of governing party Fidesz was the guest of the National University of Public Service on Tuesday, where he mostly talked about the founding of Fidesz, but he also spoke about the municipal elections, the opposition, and also about rule of law. Kövér's lecture and his answers to previously submitted questions lasted almost three hours, but he did answer all of them.

The trust lost in Budapest

"If we're being realistic, we can regain the trust of the people of Budapest if - this is something we wouldn't wish on the city - they run it into the ground the same way Gábor Demszky did for 20 years," the Speaker answered a question regarding how Fidesz can rebuild trust in them in Budapest. Kövér said:

"For twenty years, the people of Budapest were fine with the dogshit-covered, crumbling, dirty, stinky, unliveable Budapest."

He added that Tarlós may have performed miracles with the city, but that did not count at the election. Kövér opined that Fidesz made several mistakes during the campaign in Budapest, but the biggest issue was that not all of their candidates believed that they could lose. Later, he noted that the election system favoured Fidesz until now, but with a united opposition, it proved to be a disadvantage.

"If you believe that the elections held some days ago were clean, you are wrong."

He explained that this is because Facebook did not allow Fidesz to post advertisements, and while they were eradicated from the platform, faces of opposition candidates were flashing in front of anyone who used their phones or computers every thirty minutes. 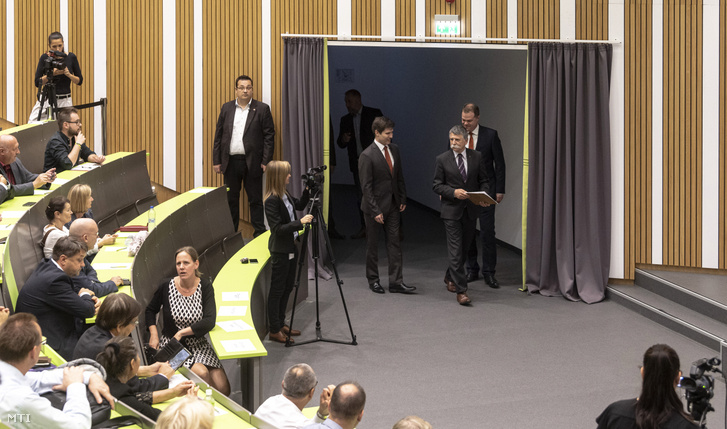 Speaker of the Hungarian Parliament László Kövér arriving at the lecture hall. Next to him is moderator György Arató.
Fotó: Szigetváry Zsolt / MTI

It's unclear what eradication Kövér is talking about, but one of the reasons opposition candidate Gergely Karácsony's face was on the screens everywhere was that Fidesz's Facebook-campaign involved the entire network of county newspapers possessed by the giant pro-government media conglomerate KESMA, as the Facebook pages of these countryside newspapers were all running ads targeted at Budapest about how unfit Karácsony really is.

The system of checks and balances is dumb

Later on, the topic of the rule of law came up. "We had to build democracy with those who had previously condemned everyone who as much as uttered that word," reminisced Kövér, adding that this is why it's not acceptable if the Germans lecture us on rule-of-law, or the Finns, who were not thrown to the communists after WWII.

"Several countries lack constitutional courts, we could say that old democracies do not have constitutional courts. They were invented after WWII, as a product of conclusions drawn from the failure of the Weimar Republic: to put it simply, the people cannot be trusted. It is the elite's distrust that is reflected in them - if, God forbid, the dense masses were to elect a house-painter or similar riff-raff, there should be somebody to say no. This is the logic constitutional courts and rule-of-law are based on."

Kövér also shed some light on his interpretation of the system of checks and balances:

"The system of checks and balances, I don't know what you learned, but it is dumb, forget about it, it has nothing to do with either the rule of law or with democracy. (...) The problem is that some people seriously think that a government needs checks after being established as a result of the democratic expression of the people's will. They think that constantly putting spokes in the wheel constitutes democracy."

After this, Kövér segued into another important topic, sovereignty. Striving to dissolve state sovereignty, according to Kövér, is not just a tendency in Hungary, but across the globe. As he said:

"Today, there is a conspiracy all over the world to dissolve state sovereignty."

As to how he discovered this conspiracy, Kövér explained:

"My revelation is connected to Mr Zuckerberg, I saw a photo of him: He was preaching to some people in front of a beautiful blue LED-wall that read: "The Future Is Private." I think that is the key, (...) the future is of the individual, the future is private. The state is nothing but the collection of optional services, which can be replaced on the free market."

By the way, we feel sorry about the Kurds

One of the questions concerned why Fidesz supports the Turkish offensive against the Kurds. Kövér started his answer by saying that it is a historical injustice that the Kurds, outnumbering Hungarians, do not have a motherland, adding:

"But the question is, my dear ladies and gentlemen, whether or not a country the size of Hungary can afford to go by its emotions and moral sense, or should it have a cool head and, given the situation, be remorseless in its definition of Hungarian interests." 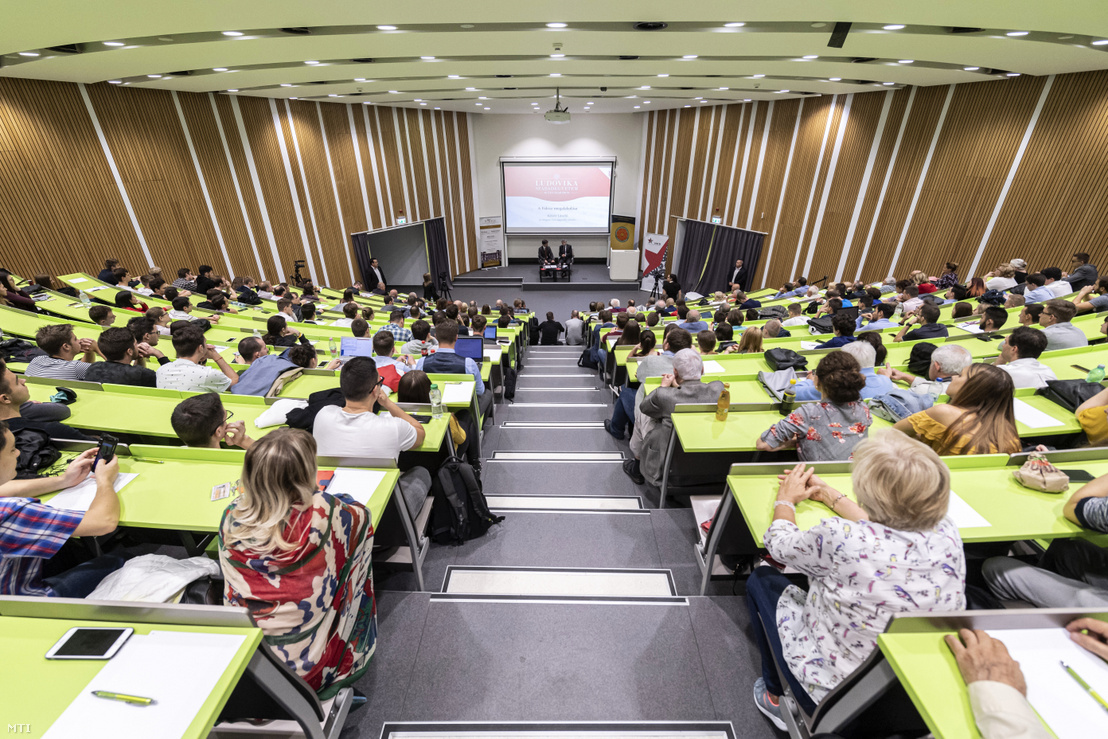 Kövér then reiterated the position of the Hungarian government: There are three million refugees in Turkey and it's an important question whether they leave for Europe or for Syria. "Without a doubt, the Kurds are fighting for their autonomy," Kövér said, but noted that the Kurdistan Workers' Party is a communist party, and according to our terms, they are terrorists as well: "It's possible to have a liking for them, as they are fighting for a just cause, but then it becomes difficult to tell terrorists apart from freedom fighters," and Kövér concluded:

"By the way, we are sorry about what happened to the Kurds, and we are also sorry for a bunch of other people in the world who did not even get as much throughout their history as we did."

Somebody asked Kövér why liberalism and youthfulness is missing from (originally liberal) Fidesz's communication, Kövér simply said it's because they are not young anymore.

"The world is full of people who are incapable of growing up. The world is being infantilised. And it is no coincidence either: Mass communication intentionally infantilises people. Take a look at advertisements! They are made for idiots. Talking dogs, bacteria living in your intestines knocking on the door saying 'Hi, we are the bacteria living in your intestines.' Well, then I am Napoleon, the viewer is bound to answer. The world is being made stupid, be suspicious. Above the age of 40, paranoia is equal to a life instinct."

Kövér added that he dislikes liberal adults, especially those who interpret liberalism in the way the world does today, instead of how they did in the time of István Tisza.

Hadházy is a misfortunate, sick man

Questions did not spare the state of the public discourse and of the opposition either. Both questions are a natural fit to Kövér.

"If contemporary Hungarian society accepts the opposition campaigning for the municipal elections by bad-mouthing the governing parties and their members in the most boorish and crude manner," Kövér started his sentence but never finished, because he quickly started talking about Ákos Hadházy who created a bit of a scandal in the Parliament on Monday: amongst others, he held up a sign during Orbán's speech that read "Horsecock," for which the Speaker called the independent MP a "primitive, moronic oaf." Now, Kövér said that he had to go to those lengths in order to signal that there are limits to everything.

"Well, he too is a misfortunate, sick man. It's a pity. (...) A halfwit who scribbles all sorts of obscene things onto a paper like a retarded child. (...) The problem is not that he is an idiot, accidents do happen."

Kövér said that there is no precedent for Hadházy's actions from the past 30 years, but that is where the standards are now. The situation in media, in movies, and in politics is that you have to send stronger and stronger impulses, as the noise of all the information drowns everything out, and stuff that happened yesterday will no longer hold our attention today, Kövér argued.

Reflecting on the current state of political culture and public discourse, Kövér noted that he does not think that Fidesz has no responsibility in this, but he said that out of a hundred political innovations that dragged standards even lower, Fidesz has nothing to do with 99. Character assassination, for instance, was a method employed against Orbán as far back as '90, when pamphlets accused him of defloration of minors and driving around in a giant white Mercedes when he was actually using the party's Lada.

Smartphones are weapons of mass destruction

According to the Speaker, if our life instincts doze off, it's over, and this world is all about manipulating everyone to ignore real threats.

"The cellular phones handed to our children, that are simultaneously computers, those little gadgets, they are weapons of mass destruction. You cannot measure the damage they do to our culture, in the mentality of the emerging youth. (...) They no longer regard communities as valuable. The phrase 'social media' is a lousy, filthy lie." 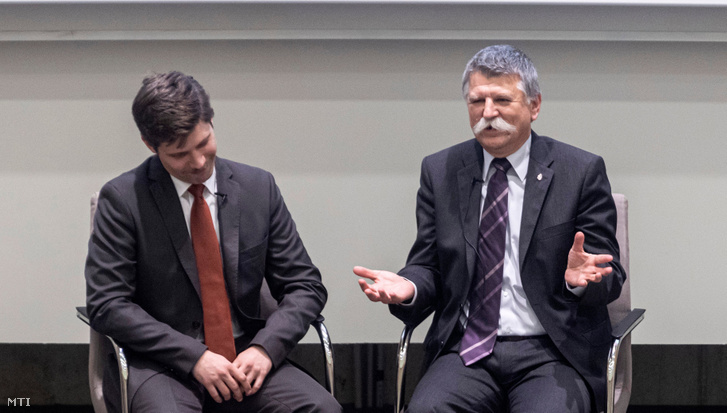 He added that if we won't do something, our world will turn terrible, and compared to that, communism (especially the period after the consolidation of the sixties) would seem like Paradise:

-Kövér summarised the communist era, but as he noted, today's goal is for everyone to be an individual. Kövér said we live in a world that is individualised to depravity.

Fidesz is an entity that instinctively became genius

Kövér also spoke about what politics, and in it, Fidesz failed to achieve throughout the 30 years since the fall of communism:

"We did not even punish those, see the Biszku-case, who effectively have blood on their hands. That is unforgivable. We could not get Béla Biszku, who is a filthy murderer whether he is dead or not, sentenced, and have him die in prison? That is a shame for Hungarian society, and not only for the political elite of the regime change, but also for the comrades in the judiciary and in prosecution."

Answering one of the last inquiries, Kövér said that Fidesz - which is an "entity that instinctively became genius" - did not change at all during the past 30 years, as considering the party's principles, there was a continuity in the party's development, they did not shift left or right, they are where they always were, though the world might have shifted. Weighing the 30-year performance of Fidesz, Kövér said that he has no bad feelings, as they did not commit any crimes against society that should make them feel ashamed.

(Cover: Speaker of the Parliament László Kövér talking about the founding of Fidesz and its circumstances at the National Public Service University on 22 October 2019. Photo: Zsolt Szigetváry / MTI)